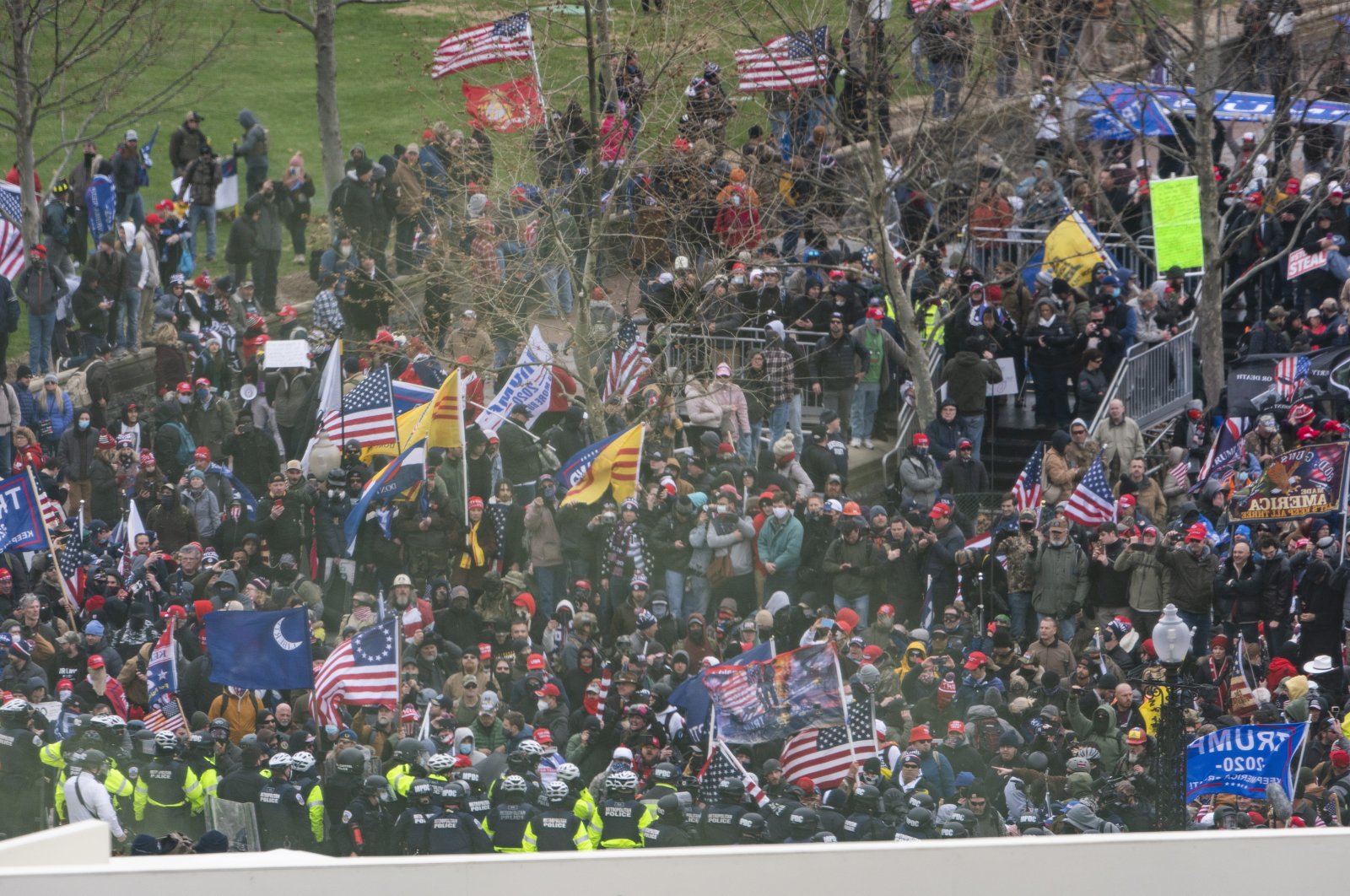 Angry supporters of President Donald Trump stormed the U.S. Capitol on Wednesday in a chaotic protest aimed at thwarting a peaceful transfer of power, forcing lawmakers to be rushed from the building and interrupting challenges to Joe Biden’s Electoral College victory.

Wednesday's ordinarily mundane procedure of Congress certifying a new president was always going to be extraordinary, with Republican supporters of Trump vowing to protest the results of an election that they have baselessly insisted was reversed by fraud. But even the unusual deliberations, which included the Republican vice president and Senate majority leader defying Trump's demands, were quickly overtaken.

In a raucous, out-of-control scene, protesters fought past police and breached the building, shouting and waving Trump and American flags as they marched through the halls. One person was reported shot at the Capitol, according to a person familiar with the situation. That person's condition was unknown.

The protesters abruptly interrupted the congressional proceedings in an eerie scene that featured official warnings directing people to duck under their seats for cover and put on gas masks after tear gas was used in the Capitol Rotunda.

With the crowds showing no signs of abating, Trump tweeted, “Please support our Capitol Police and Law Enforcement. They are truly on the side of our Country. Stay peaceful!” Earlier, at his rally, he had urged supporters to march to the Capitol.

Senators were being evacuated. Some House lawmakers tweeted they were sheltering in place in their offices.

Demonstrators fought with Capitol Police and then forced their way into the building, not long after a huge rally near the White House during which Trump egged them on to march to Capitol Hill.

Lawmakers had convened for an extraordinary joint session to confirm the Electoral College results.

Though fellow Republicans were behind the challenge to Biden’s 306-232 Electoral College victory, Senate Majority Leader Mitch McConnell sought to lower tensions and argued against it. He warned the country “cannot keep drifting apart into two separate tribes” with “separate facts.”

McConnell declared, “The voters, the courts and the states all have spoken."

But other Republicans, including House GOP leaders among Trump's allies were acting out the pleas of supporters at his huge Wednesday rally up Pennsylvania Avenue outside the White House to “fight for Trump.”

“We have to fix this,” said Rep. Steve Scalise of Louisiana, the GOP whip.

The last-gasp effort is all but certain to fail, defeated by bipartisan majorities in Congress prepared to accept the November results. Biden is to be inaugurated Jan. 20.

Still, Trump vowed to he would “never concede” and urged the massive crowd to march to the Capitol where hundreds had already gathered under tight security.

“We will never give up,” Trump told his noontime rally.

Vice President Mike Pence was closely watched as he stepped onto the dais to preside over the joint session in the House chamber.

Pence has a largely ceremonial role, opening the sealed envelopes from the states after they are carried in mahogany boxes used for the occasion, and reading the results aloud. But he was under growing pressure from Trump to overturn the will of the voters and tip the results in the president’s favor, despite having no legal power to affect the outcome.

“Do it Mike, this is a time for extreme courage!” Trump tweeted Wednesday.

But Pence, in a statement shortly before presiding, defied Trump, saying he could not claim “unilateral authority" to reject the electoral votes that make Biden president.

Despite Trump’s repeated claims of voter fraud, election officials and his own former attorney general have said there were no problems on a scale that would change the outcome. All the states have certified their results as fair and accurate, by Republican and Democratic officials alike.

Arizona was the first of several states facing objections from the Republicans as Congress took an alphabetical reading of the election results. Then the chaos erupted.

Hours after supporters of Trump stormed the U.S. Capitol, Vice President Pence said those involved in raiding the building will be prosecuted.

In pair of tweets, Pence called for an end to the violence at the Congress building and urged protestors to leave.

"The violence and destruction taking place at the US Capitol Must Stop and it Must Stop Now. Anyone involved must respect Law Enforcement officers and immediately leave the building," he tweeted.

"Peaceful protest is the right of every American, but this attack on our Capitol will not be tolerated, and those involved will be prosecuted to the fullest extent of the law," he wrote.

"The outcome of this democratic election must be respected," he said, referring to the U.S. presidential election that saw Biden beat Trump.

German Foreign Minister Heiko Maas also said democracy's enemies would be cheered by scenes of violence at the Capitol, and he called on Trump to accept U.S. voters' decision.

In a Tweet posted after protesters stormed the seat of the U.S. legislature, Maas said the violence had been caused by inflammatory rhetoric.

"The enemies of democracy will be delighted at these terrible images from Washington DC," he wrote on Wednesday. "Trump and his supporters must accept the decision of American voters at last and stop trampling on democracy."

Senate Democratic leader Chuck Schumer and House Speaker Nancy Pelosi issued a joint statement and said: "We are calling on President Trump to demand that all protestors leave the U.S. Capitol and Capitol Grounds immediately.”

"What we're seeing today is not democracy—it's an attempted coup. We had a free and fair election," Wolf said on Twitter.

"The results were clear. Republicans from Pres. Trump to PA legislative leaders need to stop the disinformation and tell their supporters the truth before there's further violence," he wrote.

The White House said the National Guard "is on the way" to the scene "along with other federal protective services" at Trump's direction.