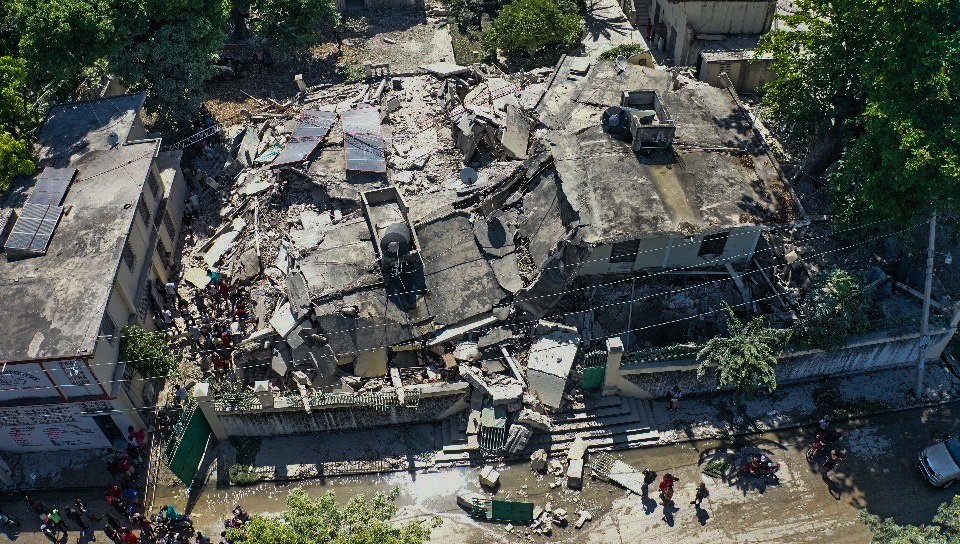 At least 227 people have been killed in a 7.2 magnitude earthquake that struck Haiti Saturday, authorities said. Numerous buildings were damaged in the west of the disaster-plagued Caribbean nation, subsequently sparking a regional tsunami alert according to the United States Geological Survey (USGS).

The earthquake struck 8 kilometers (5 miles) from the town of Petit Trou de Nippes, about 150 kilometers (about 100 miles) west of the capital Port-au-Prince, at a depth of 10 kilometers, the USGS said.

"Lots of homes are destroyed, people are dead and some are at the hospital," Christella Saint Hilaire, who lives near the epicenter, told Agence France-Presse (AFP). "Everyone is in the street now and the shocks keep coming."

The long, initial shock was felt in much of the Caribbean. It damaged schools as well as homes on Haiti's southwestern peninsula, according to images from witnesses.

"I can confirm there are deaths, but I don't yet have an exact toll," said Jerry Chandler, who heads the country's civil protection agency.

Residents shared images on social media of the ruins of concrete buildings, including a church in which a ceremony was apparently underway on Saturday in the southwestern town of Les Anglais.

The USGS issued a tsunami warning, saying waves of up to three meters (nearly 10 feet) were possible along the coastline of Haiti, but it soon lifted the warning.

A magnitude-7.0 quake in January 2010 transformed much of Port-au-Prince and nearby cities into dusty ruins, killing more than 200,000 and injuring some 300,000 others.

More than a million and a half Haitians were made homeless, leaving island authorities and the international humanitarian community with a colossal challenge in a country lacking either a land registry or building codes.

The quake destroyed hundreds of thousands of homes, as well as administrative buildings and schools, not to mention 60% of Haiti's health-care system.

The rebuilding of the country's main hospital remains incomplete, and nongovernmental organizations have struggled to make up for the state's many deficiencies.

Police say they have arrested 44 people in connection with the killing, including 12 Haitian police officers, 18 Colombians who were allegedly part of the commando team, and two Americans of Haitian descent.

The head of Moise's security detail is among those detained in connection with the plot allegedly organized by a group of Haitians with foreign ties.

Police have issued wanted-persons notices for several other people, including a judge from Haiti's highest court, a former senator and a businessman.

Moise had been ruling the impoverished and disaster-plagued nation by decree, as gang violence spiked and COVID-19 spread.