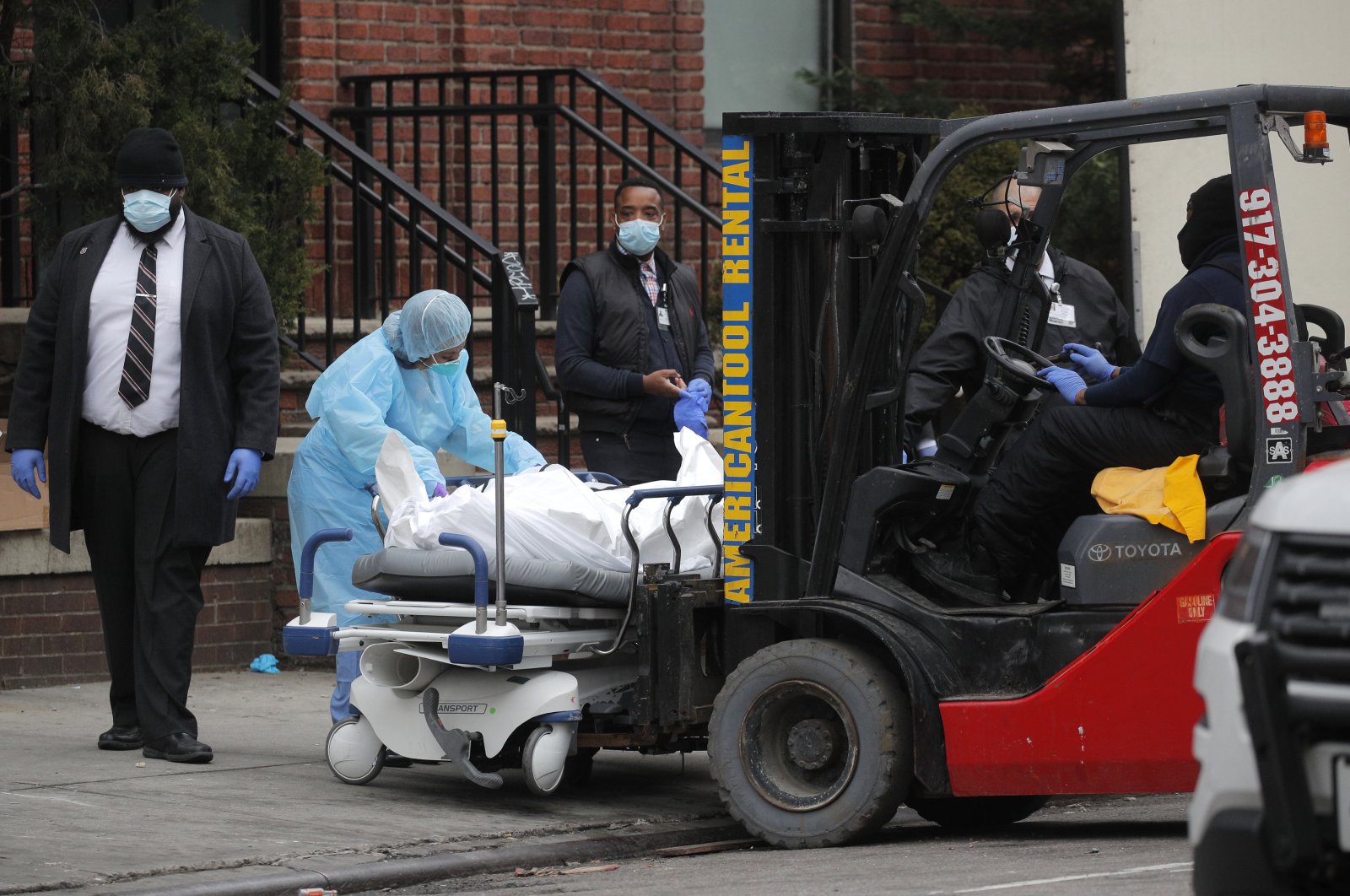 Workers prepare to load a deceased person into a trailer outside of Brooklyn Hospital Center during the coronavirus outbreak in the Brooklyn borough of New York City, New York, U.S., Monday, March 30, 2020. (Reuters Photo)
by Daily Sabah with Agencies Mar 31, 2020 12:52 am
RECOMMENDED

The refrigerated trucks that once served as makeshift morgues during the 9/11 terrorist attack have returned to the streets of New York City.

As the deadly virus sweeps the city of 8.6 million, hospitals are turning to these trucks to store the bodies of those who lost their lives to COVID-19, the disease caused by the new coronavirus.

One video shared on Twitter by an unidentified man shows hospital workers outside Brooklyn Hospital Center appearing to move bodies onto a truck.

"This is for real. This is Brooklyn," the man filming the moment says.

“Y’all take this thing real serious ... Please stay inside. Please pray for the people,” he says, adding that his hands are shaking due to the gravity of the scene.

"This thing may make you want to take this serious," he added.

For most people, the coronavirus causes mild or moderate symptoms, such as fever and a cough. But for others, especially older adults and people with existing health problems, the virus can cause severe symptoms like pneumonia and can be fatal.

In New York, the virus is overwhelming some of the city's poorest neighborhoods, with data showing high rates of infection in densely packed areas with big non-English-speaking populations.

Dr. Craig Smith, who heads the surgery department at New York-Presbyterian/Columbia University Medical Center, said the hospital will probably be forced into “apocalyptic scenarios” in the coming weeks in which ventilators and intensive care unit beds will need to be rationed.

U.S. President Donald Trump spoke of the haunting images he had seen on television this week of bodies being removed from Elmhurst Hospital in his native Queens and put in large refrigerated trucks.

“Body bags all over, in hallways,” Trump said. “I've seen things that I've never seen before.”

Hospitals are turning to the trucks as their own morgue capacities have been overwhelmed by the wave of COVID-19 deaths in recent days. The morgue at Brookdale Hospital in Brooklyn, for example, can only hold 20 bodies at a time, according to CNN, and the current rate of deaths due to the coronavirus is far above that number.

New York state's death toll climbed by more than 250 on Monday for a total of more than 1,200 victims, most of them in the city.

The U.S. military said Monday it was looking to send mortuary affairs personnel to New York as part of the U.S. government's response to the coronavirus pandemic.

"We did receive a mission assignment from FEMA for (a) mortuary affairs support team for New York and we're in the process of sourcing some personnel," Major General Jeff Taliaferro, vice director for operations at the Joint Staff, told a group of reporters, referring to the Federal Emergency Management Agency.

New York's governor issued an urgent appeal for medical volunteers Monday, as he and health officials warned that the crisis unfolding in New York City is just a preview of what other communities across the U.S. could soon face.

Three-quarters of a million people around the world have become infected and around 37,000 have died, according to a running count kept by Johns Hopkins University.

The U.S. reported nearly 160,000 infections and about 2,900 deaths, with New York City the nation's worst hot spot, but with New Orleans, Detroit and other cities also seeing alarming clusters.