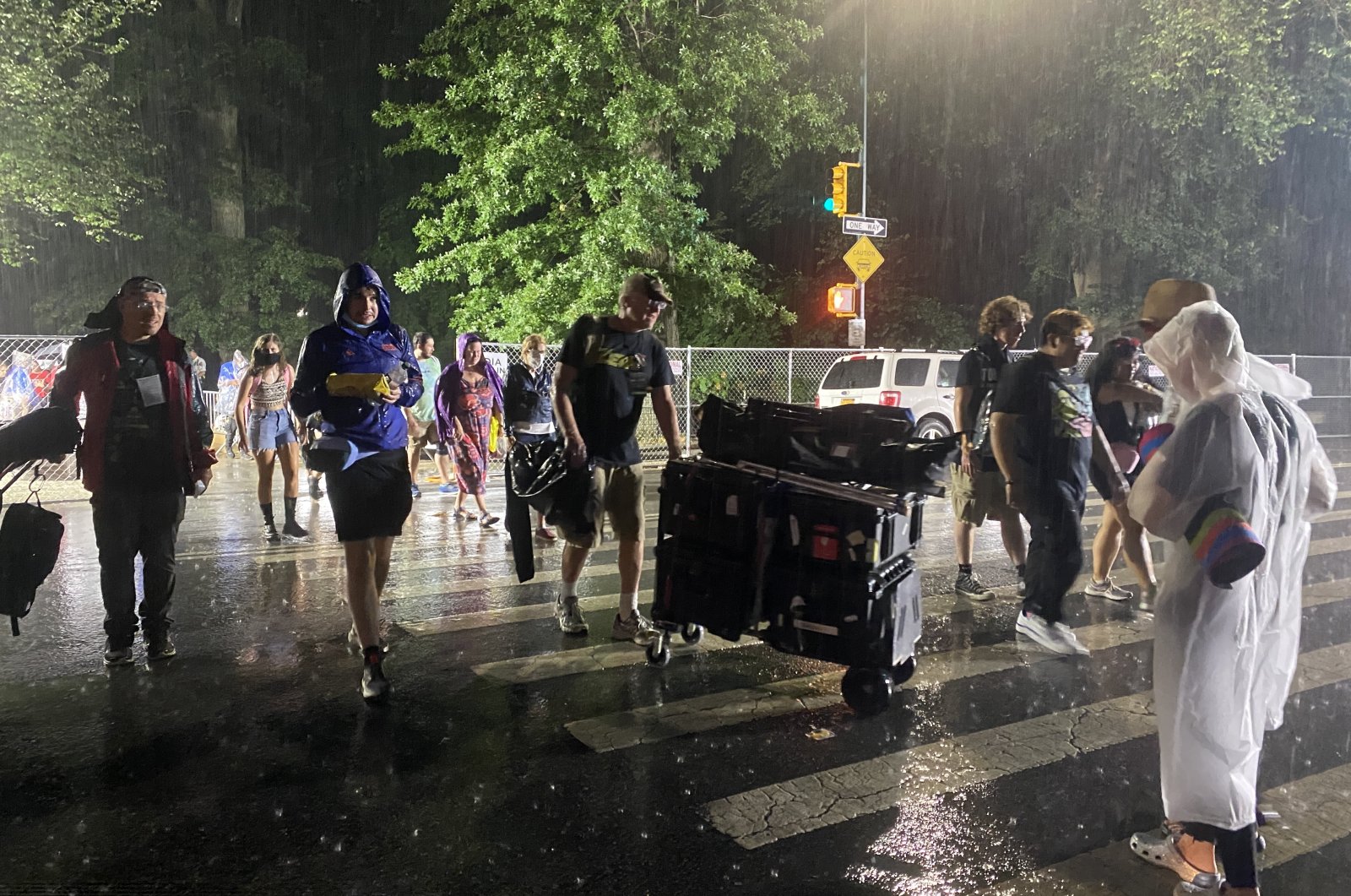 People are seen leaving a concert amid the Hurricane Henri's advance into the northeastern United States on Aug. 22, 2021 (AA Photo)
by Agencies Aug 22, 2021 10:08 am
RECOMMENDED

Streets of New York City were flooded as Hurricane Henri kept on course early Sunday to crash into a long stretch of northeastern coastline, as millions on New York’s Long Island and in southern New England rushed home to brace for more flooding, toppled trees and extended power outages.

With the center of the storm projected to pass just off the eastern tip of Long Island by midday, hurricane warnings extended from coastal Connecticut and Rhode Island to near the old whaling port of New Bedford, Massachusetts, and across the luxurious oceanfront estates of New York’s Hamptons to the summer getaway of Fire Island.

In a Twitter post on Saturday, Mayor Bill de Blasio also urged residents to stay home and to use public transport if they need to travel.

"Secure outdoor objects and make sure you are in a safe location before the onset of wind and rain!," New York City Emergency Management Commissioner John Scrivani wrote in a tweet on Saturday.

The first thunderstorms bringing what could be up to half a foot (15 centimeters) of rain arrived late Saturday, and flash flooding began in some areas overnight. Bands of heavy rain overwhelmed storm drains and drivers plowed through foot-deep water in a few spots in New York City, and Newark and Hoboken, New Jersey.

Tropical storm-intensity winds were expected to begin striking the coast at around 8 a.m.

People in the projected path spent Saturday scrambling to stock up on groceries and gasoline. Those close to the coast boarded up windows and, in some cases, evacuated.

Residents and visitors on Fire Island, a narrow strip of sandy villages barely above sea level off Long Island’s southern coast, were urged to evacuate. The last boats out left before 11 p.m. Saturday and officials warned there might be no way to reach people left behind.

The evacuation threw a wrench into Kristen Pavese’s planned Fire Island bachelorette party. The group of 10 had intended to celebrate Saturday night, but ended up leaving on the ferry just a day after arriving. They had planned to stay until Monday.

“I’m upset about it, but it’s the weather. It’s nothing I can control,” said Pavese, a Long Island resident. “I’ve been going to Fire Island for a long time, so I’m sort of familiar with this happening.”

Approaching severe weather Saturday night also cut short a superstar-laden concert in Central Park. The show headlined by Bruce Springsteen, Paul Simon and Jennifer Hudson was meant to celebrate New York City’s recovery from the coronavirus. But officials asked concertgoers to leave the park during Barry Manilow’s set amid the threat of lightning.

Gov. Andrew Cuomo, set to leave office Monday after resigning over a sexual harassment scandal, emerged Saturday to plead with New York residents to make last-minute preparations, warning that heavy rain, wind and storm surge from Henri could be as devastating as Superstorm Sandy back in 2012.

“We have short notice. We’re talking about tomorrow,” Cuomo said in one of his final forays before TV cameras, a setting that shot him to fame during the worst of the pandemic last year. “So if you have to move, if you have to stock up, if you have to get to higher ground, it has to be today. Please.”

Gov. Ned Lamont warned Connecticut residents they should prepare to “shelter in place” from Sunday afternoon through at least Monday morning as the state braces for the first possible direct hit from a hurricane in decades. Rhode Island Gov. Dan McKee issued a similar warning.

Major airports in the region remained open as the storm approached, though hundreds of Sunday's flights were canceled. Service on some branches of New York City’s commuter rail system was suspended through Sunday, as was Amtrak service between New York and Boston.

New York hasn’t had a direct hit from a powerful cyclone since Superstorm Sandy wreaked havoc in 2012. Some of the most important repairs from that storm have been completed, but many projects designed to protect against future storms remain unfinished.

With a top wind of 75 mph (120 kph), just above hurricane strength, Henri sped up to move north at 21 mph (38 kph) as of Sunday morning. It was about 135 miles (215 kilometers) south-southeast of Montauk Point on the tip of Long Island.

Some gas stations from Cape Cod to Long Island sold out of fuel. Southampton Town Supervisor Jay Schneiderman described a run on supplies like batteries and flashlights as people “are starting to wake up” as weather models showed the storm's center would run “smack on the town of Southampton.”

Regardless of its exact landfall, broad impacts were expected across a large swath of the Northeast, extending inland to Hartford, Connecticut, and Albany, New York, and eastward to Cape Cod, which is teeming with tens of thousands of summer tourists.

Storm surge between 3 and 5 feet (1 to 1.5 meters) was possible in much of Long Island Sound all the way to Chatham, Massachusetts, and slightly less on Long Island's Atlantic coast, the hurricane center said. Flash flooding was possible in inland areas already saturated by recent rain.

In the Hamptons, the celebrity playground on Long Island’s east end, officials warned of dangerous rip currents and flooding that’s likely to turn streets like the mansion-lined Dune Road into lagoons.

“We have a lot of wealthy people. There’s no doubt that we do, but everybody pulls together in an emergency,” Schneiderman said. “So, you know, yeah, there are people hanging out on their yachts at the moment drinking martinis, but they’re also starting to talk about this storm and I’m sure they’re going to want to be helpful.”