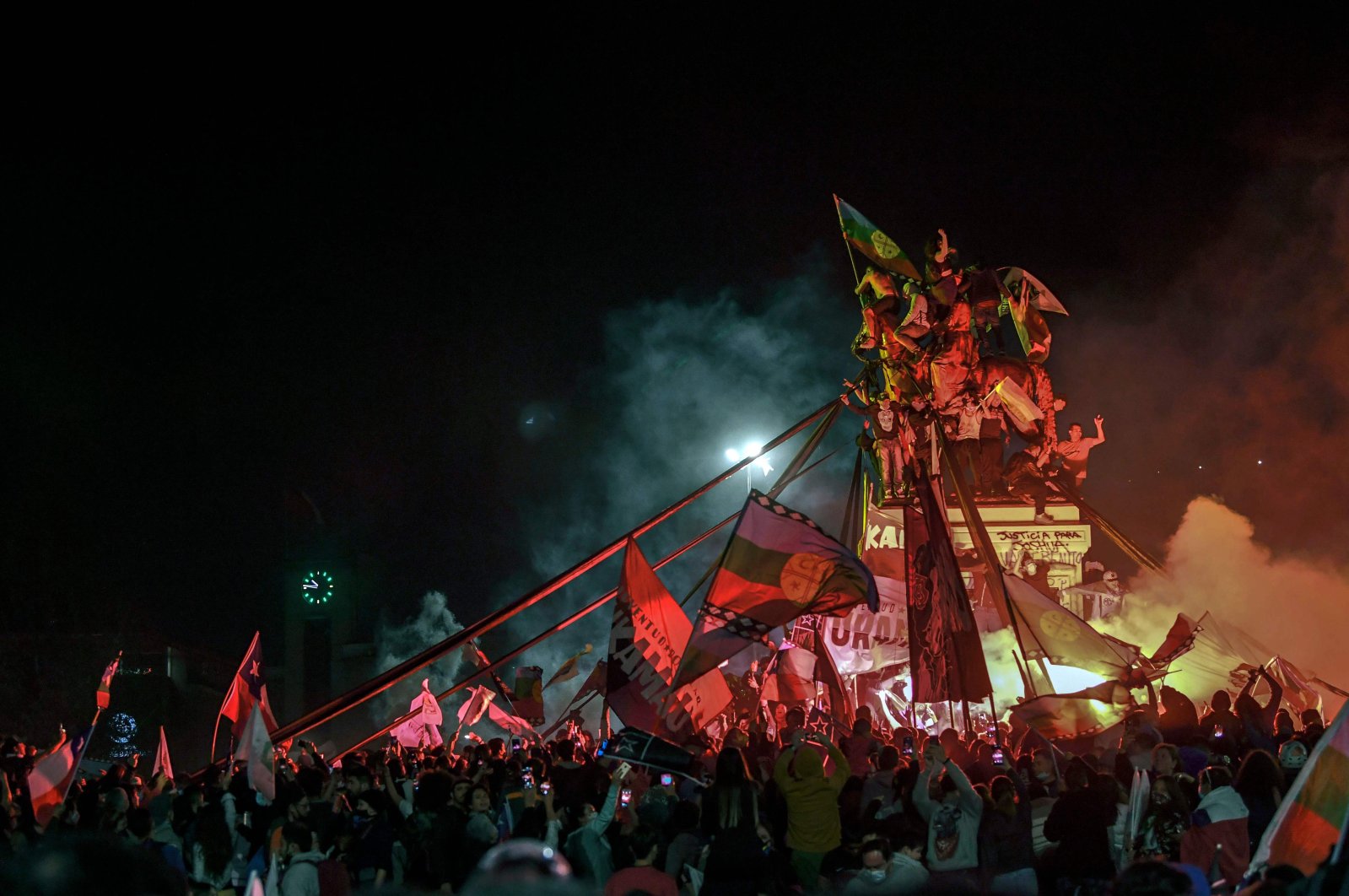 Demonstrators supporting the reform of the Chilean constitution celebrate while waiting for the referendum official results at Plaza Italia in Santiago on Oct. 25, 2020. (AFP Photo)
by German Press Agency - DPA Oct 26, 2020 11:21 am
RECOMMENDED

Chileans have overwhelmingly voted to rewrite the South American country's dictatorship-era constitution, which its critics see as favoring deep levels of socioeconomic inequality that fueled a wave of violent protests in 2019 and 2020.

With 90.78% of polling stations scrutinized, 78.24% voted in favor of a new constitution, while 21.76 voted against, according to figures released by the Electoral Service on Sunday night.

The referendum on whether to change the constitution established under the military dictatorship of Augusto Pinochet (1973-1990) had initially been scheduled for April but was postponed because of the coronavirus pandemic.

President Sebastian Pinera's conservative government agreed to organize the referendum after weeks of pressure from demonstrators demanding better education, higher pensions and an end to neoliberal economic policies in one of Latin America's most unequal countries.

The protests have continued after a pause due to the coronavirus pandemic. More than 30 people were killed between October 2019 and February this year. Over 14 million Chileans were eligible to vote in the referendum and to answer two questions: whether the constitution should be rewritten and if so, who should do it.

With the majority of polling stations scrutinized, more than 79% of Chileans opted for a convention of elected citizens, while almost 21% voted for the mixed option. There were long lines at the polling stations, suggesting a high level of turnout.

Voting proceeded smoothly and no clashes were reported on Sunday. For the first three hours, the polls were open for older people or those with health conditions who could be vulnerable to infection with the novel coronavirus.

Pinera cast his vote early in the day in the capital, Santiago.

"I think the overwhelming majority of Chileans want to change the constitution," local media quoted him as saying. "We are in a situation where politics has no legitimacy. We, therefore, need a new constitution," constitutional law expert Fernando Atria told broadcaster TVN. "The democratic idea must reflect the reality and the daily life of the people."

A new constitution would also help the country make a definitive break with Pinochet's dictatorship, under which at least 3,000 people were killed and thousands sequestered and tortured, according to analysts. "This dark chapter of Chilean history must finally end," said Margit Wichelmann, a Chile expert with the German Catholic relief organization Adveniat.

However, Chileans are divided over whether a reform of the 1980 constitution – which has already been amended dozens of times – would make the country more democratic or more unstable. Leftist critics say the current constitution has provisions that contribute to inequality, such as the prioritization of property rights and the strong role of the private sector in providing services, while making it difficult to change major laws.

They want the eventual new constitution to strengthen the social role of the state and to include rights such as work, health care and education, as well as indigenous people's cultural and land rights. Those opposing the reform – mainly conservatives – argue it would endanger a model that delivered decades of rapid economic growth and relative stability.

The vote was preceded by rioting a week earlier, with churches set on fire as thousands of people took to the streets to mark the first anniversary of the start of the ongoing protest wave. The protests have not only claimed dozens of lives but also led to hundreds of people suffering from eye injuries, including partial and even total blindness after police shot them with rubber bullets or fired tear gas.

"A new constitution should define a new role for the security forces grounded in basic democratic rights," Wichelmann said. If a new constitution is drafted, it will be submitted to another plebiscite.