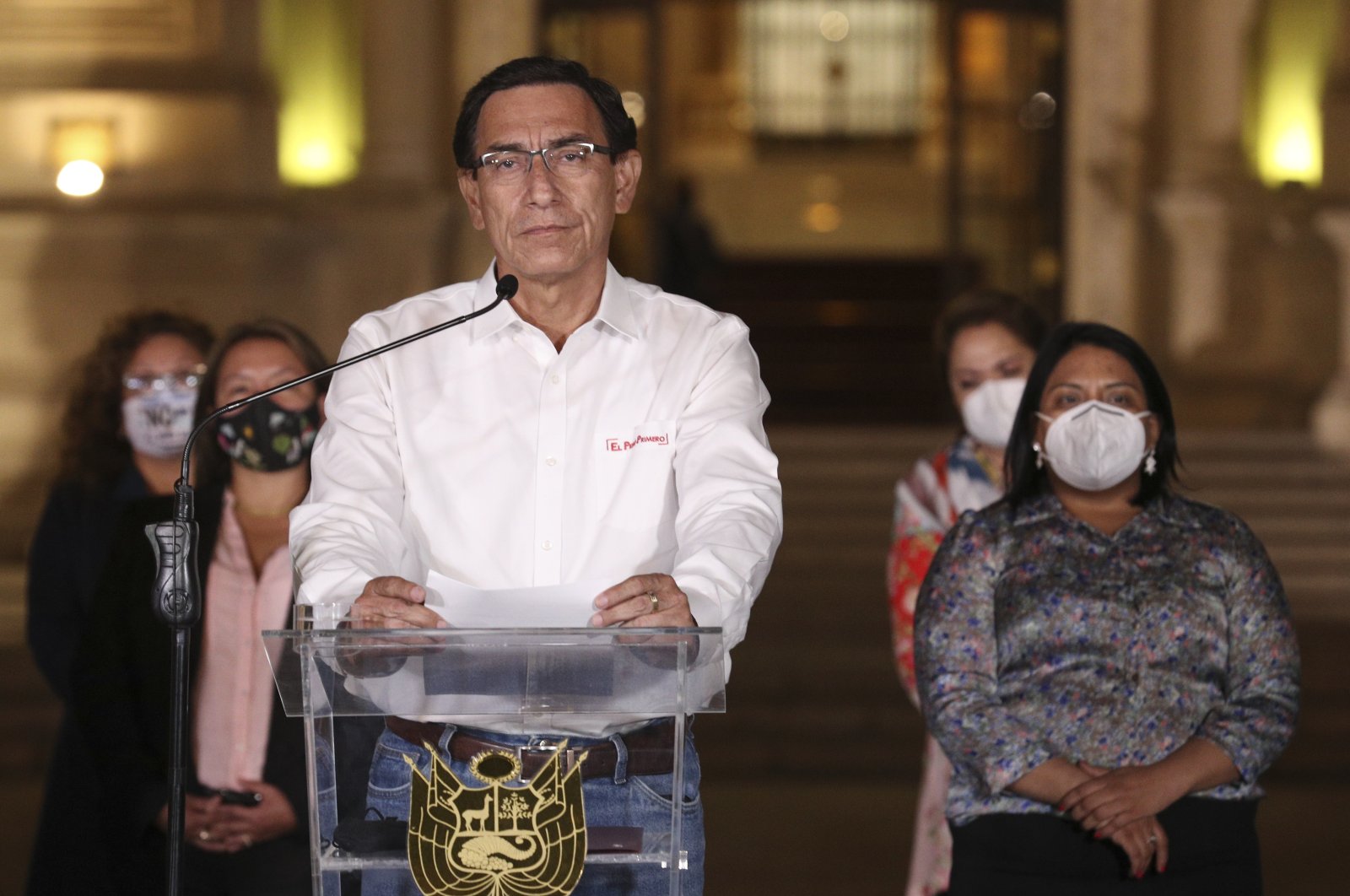 Peru's President Martin Vizcarra speaks in front of the presidential palace after lawmakers voted to remove him from office in Lima, Peru, Nov. 9, 2020. (AP Photo)
by ASSOCIATED PRESS
Nov 10, 2020 10:09 am

Peru tumbled into political turmoil Tuesday as anger mounted over a vote by Congress to oust the country’s popular president over his handling of the pandemic and unproven allegations of corruption years ago.

Thousands poured on to the streets of Peru’s capital Monday night to protest President Martin Vizcarra’s removal, vilifying lawmakers and demanding their resignations. Several politicians not in Congress denounced the ouster as a disguised coup. Some said any new incoming president should be considered illegitimate.

But the outgoing leader who himself rose to power after another president’s downfall quickly announced he wouldn’t pursue any legal challenges, even though he insisted he had committed no crime.

“Today I am leaving the government palace,” Vizcarra said. “Today I am going home.”

According to the chain of succession, the head of the legislature will take his place. Lawmakers scheduled a ceremony to swear in the new leader Tuesday morning.

Analysts called the action by legislators an overt and risky power grab, with Congress already unpopular while Vizcarra is widely lauded for his campaign against corruption. The speed of the move against the president and lack of evidence led some political analysts to warn that Congress could be putting Peru’s democracy in jeopardy.

“To go after a president and destabilize the country’s democracy in the middle of this type of crisis for no serious reason is beyond reckless,” said Steve Levitsky, a Harvard University political scientist who has extensively studied Peru.

The ouster measure was supported by 105 legislators – far more than the 87 votes needed for the two-thirds majority required to remove Peru’s president. Many said they were casting their vote for his removal in the name of dead loved ones.

“Because of his negligence and incapacity we’ve lost thousands of compatriots,” lawmaker Robinson Gupioc said during the more than five hours of debate.

Coming just weeks after Vizcarra easily survived another removal vote, Monday’s action could spell a new chapter of uncertainty for the country, which has the world’s highest per capita COVID-19 mortality rate and is facing a deep recession.

Legislators brought the impeachment proceeding forward on allegations that Vizcarra received more than $630,000 in exchange for two construction projects while serving as governor of a small province in southern Peru in 2011-2014. The allegations are being investigated, but Vizcarra’s supporters have questioned their veracity, noting that they come from construction managers themselves accused of corruption. The accusers could get any potential jail time reduced in exchange for the information.

In his defense, Vizcarra warned opposition lawmakers that a rash decision to remove him could bring grave consequences for the already distressed nation. He arrived at Congress wearing a mask with the image of a condor flying over the Andean mountains and said, “History and Peruvians will judge our decisions.”

Speaking to legislators who at times yelled out against him, Vizcarra said he did not have the authority as governor to usher through the contracts in question, which must go through a lengthy approval process involving multiple actors. One contract was for an irrigation project and the other for a hospital.

In Peru, lawmakers can remove a president on the vaguely defined grounds of “moral incapacity.” Vizcarra told them that such a vote “would increase fears about the viability and institutions of Peru, and that would bring grave economic consequences.”

But in numerous speeches, lawmakers went beyond the corruption allegations in explaining why they wanted Vizcarra out. Many pointed to Peru’s high virus numbers, deadly oxygen shortages and the misuse of rapid antibody tests to diagnose cases even though they can’t identify the infection early during an illness. At least 34,879 people have died among 922,333 infected by the virus in Peru, a nation of 32 million people.

“This is something I can never forgive,” lawmaker Maria Cabrera said.

Vizcarra rose to the nation’s highest office in 2018 after then-President Pedro Pablo Kuczynski resigned amid allegations that he had failed to disclose payments from Brazilian construction giant Odebrecht to his private consulting firm.

Vizcarra made defeating corruption his principal mission, and he is one of the nation’s most popular leaders in recent history.

But he has been unable to make friends in Congress, dismissing lawmakers last year in a brash move cheered by citizens as a victory against dishonest politicians. He has also pushed through initiatives to curb corruption by changing how judges are chosen and to bar politicians with crimes from running for office.

Jo-Marie Burt, a senior fellow with the Washington Office on Latin America, said the impeachment is “terribly destabilizing for Peru.”

“It generates a huge amount of uncertainty at a time when the economy is in a tailspin because of COVID and people are dying,” she said.