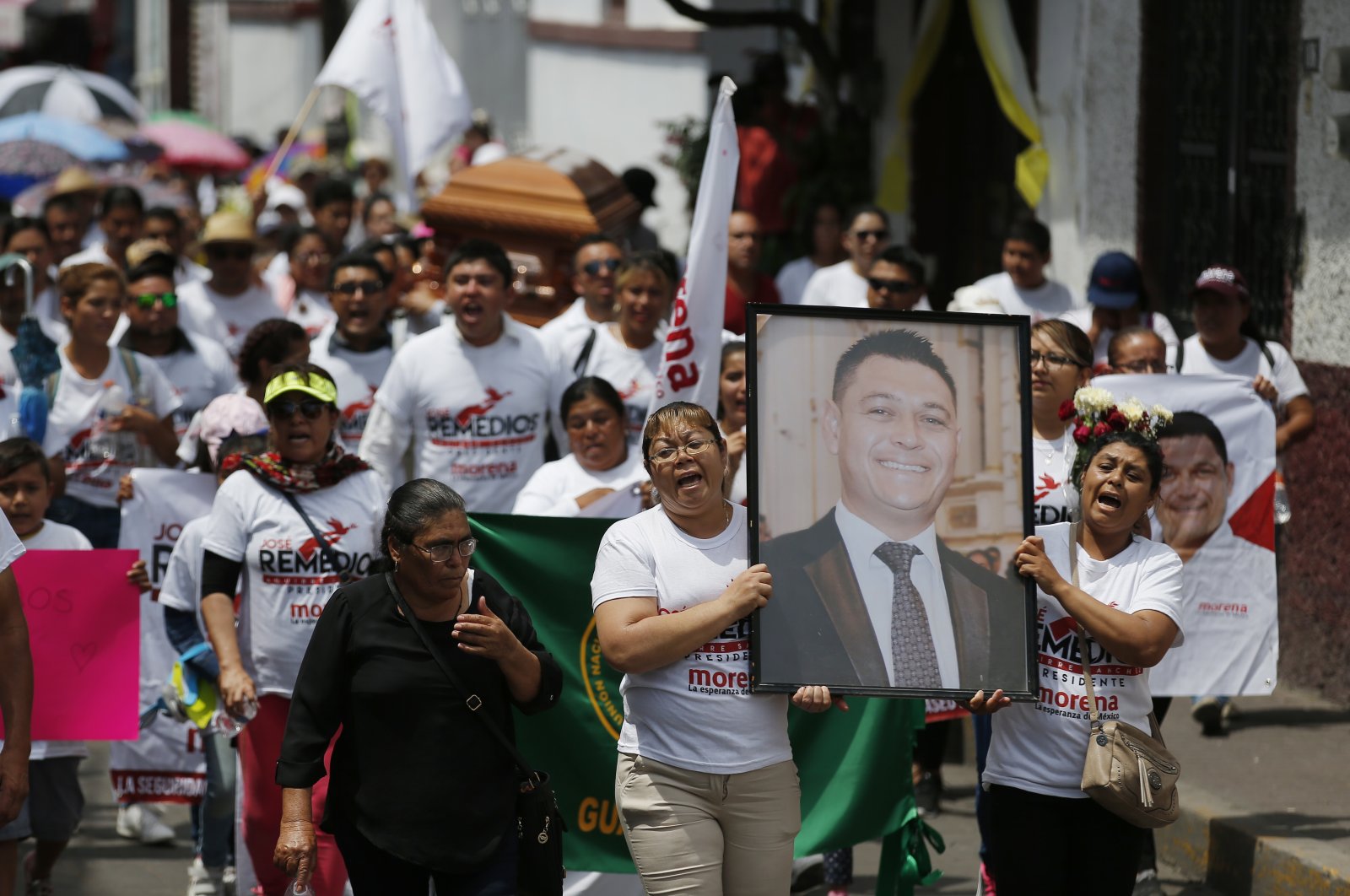 Women carry a photo of the late Jose Remedios Aguirre, a mayoral candidate who was shot in broad daylight two days prior, during his funeral procession in Apaseo El Alto, Mexico, May 13, 2018. (AP Photo)
by French Press Agency - AFP Mar 09, 2021 12:22 pm
RECOMMENDED

Mexico has seen a surge of political violence in the wake of the upcoming elections as dozens of politicians have been murdered by criminal gangs vying for influence and safety remains in question across the country for those that hold office or intend to do so.

At least 66 Mexican politicians have been murdered since September in a blood-stained electoral campaign, including two mayoral candidates killed on the same day last week.

Kidnapping, threats against relatives, arson attacks on homes and extortion are also among the tactics used by drug cartels and other criminal gangs to entrench their power, according to Agence France-Presse (AFP).

She was speaking as the government pledged last week to boost security for candidates ahead of the June 6 national, regional and local polls.

"A mayor who wins thanks to organized or white-collar crime will be a puppet," President Andres Manuel Lopez Obrador said.

For politicians in the Latin American nation, particularly at the local level, running for office can be a death sentence due to violence linked to corruption and the multibillion-dollar narcotics trade.

That was the case for Ignacio Sanchez, a candidate for mayor in the Caribbean coastal town of Puerto Morelos, who was shot dead on Feb. 24.

"He was well regarded ... not like those who are linked to organized crime and hang out with bodyguards. It was a political crime. It was clear that he was going to win," a person close to Sanchez told AFP.

The 42-year-old told his close confidants before his death that a rival had allegedly offered 5 million pesos ($233,000) to whoever killed him, according to the person, who spoke on the condition of anonymity.

Mexico has a dozen cartels and other gangs dedicated to crimes such as drug smuggling, fuel theft and people trafficking.

In addition to threats, some of the criminal organizations, such as the Jalisco New Generation and Sinaloa cartels, "are trying to sponsor candidates," said investigative journalist and author Anabel Hernandez.

The political violence is part of the wider bloodshed gripping Mexico, where more than 300,000 people have been murdered since the government deployed the army to fight the cartels in 2006.

According to the consulting firm Etellekt, more than 150 politicians were killed during a particularly bloody campaign for the 2018 elections that brought Lopez Obrador to power.

Gerardo Rodriguez, a security expert at the Autonomous University of Puebla, said that criminal gangs "seek to use violence to get mayors elected who guarantee impunity for their operations."

Another factor is that "local political bosses use violence because their power is threatened," Rodriguez said.

According to Mexico's Association of Local Authorities, 192 mayors, former mayors and other local politicians were murdered between 2006 and July 2020.

Political rivalry has grown, with deadly consequences, since 2000 when the Institutional Revolutionary Party (PRI) lost its 71-year grip on the presidency, Etellekt head Ruben Salazar said.

Starting that year, "a system of vertical control exercised by the president broke down," he said.

"When mayors began to have the power to designate their candidates, murders of politicians and electoral candidates began to increase," he said.