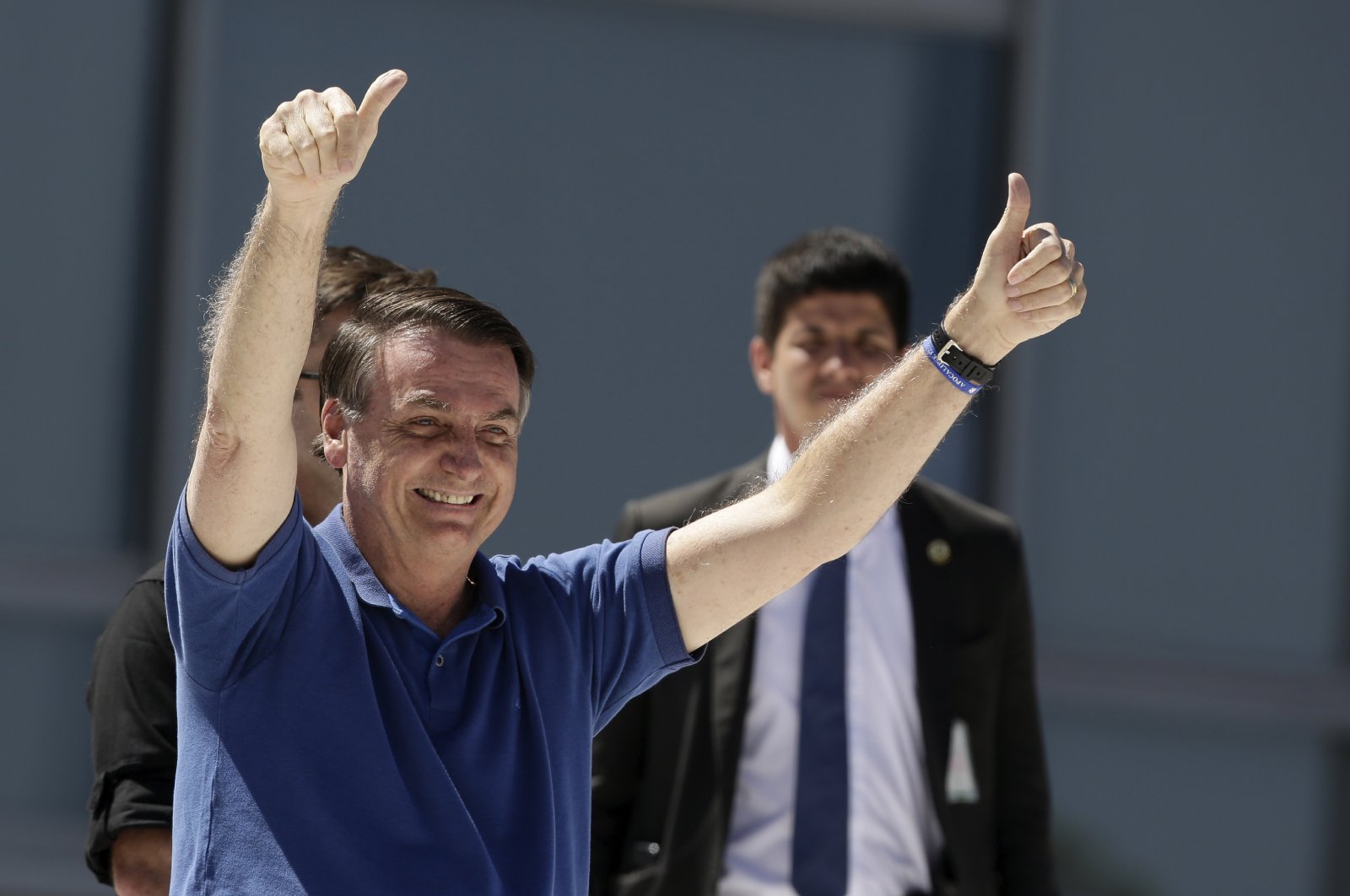 Brazil's President Jair Bolsonaro signals thumbs up to his supporters during a protest against his former Minister of Justice Sergio Moro and the Supreme Court, in front of the Planalto presidential palace, in Brasilia, Brazil, Sunday, May 3, 2020. (AP Photo)
by Anadolu Agency May 04, 2020 10:24 pm
RECOMMENDED

De Souza is a friend of Bolsonaro's family and a close aide to his previous nominee, Alexandre Ramagem, whose appointment was blocked by Brazil's Supreme Court, which enraged the president.

On Saturday, former Justice Minister Sergio Moro, who quit on April 24, presented his testimony regarding the possible obstruction of justice by Bolsonaro.

Hours before, the president called Moro "Judas", referring to the apostle who betrayed Jesus.

"Has Judas, who will testify today, interfered so that no investigation will take place? I will not do anything that is not in accordance with the Constitution. But neither will I allow them to do anything against me or Brazil that goes against our Constitution," Bolsonaro wrote on Twitter.

As Brazil surpassed 100,000 coronavirus cases, its right-wing president attacked Congress and the Supreme Court in a speech to hundreds of supporters who called for the closing of these bodies.

Bolsonaro said his government is supported by the armed forces and the people, and accused governors of imposing confinement measures to the detriment of the country's economy.

On Monday, Bolsonaro condemned an attack on journalists at the Sunday rally who were verbally and physically abused by demonstrators.

He said before a group of supporters outside the Alvorada Palace, his official residence in Brasilia, that the attacks on journalists were carried out by "crazy people" and claimed that those responsible "should be punished."

"I didn't see anything. I was inside the Palace. We condemn any aggression that has occurred. If there were aggressions, by some crazy person they must be punished. There can be no aggression. Now, booing is part of democracy," he said.

On Sunday, a global coalition of artists, celebrities, scientists and intellectuals from all over the world signed an open letter to the Brazilian government, calling on officials to protect the nation's indigenous people who "may disappear completely because they have no means of combating Covid-19," they wrote.

Madonna, Oprah Winfrey, Brad Pitt, Paul McCartney and Brazilian supermodel Gisele Bundchen warned that loggers and ranchers could introduce the virus to indigenous communities who live in remote locations with limited access to health care, which would result in genocide.