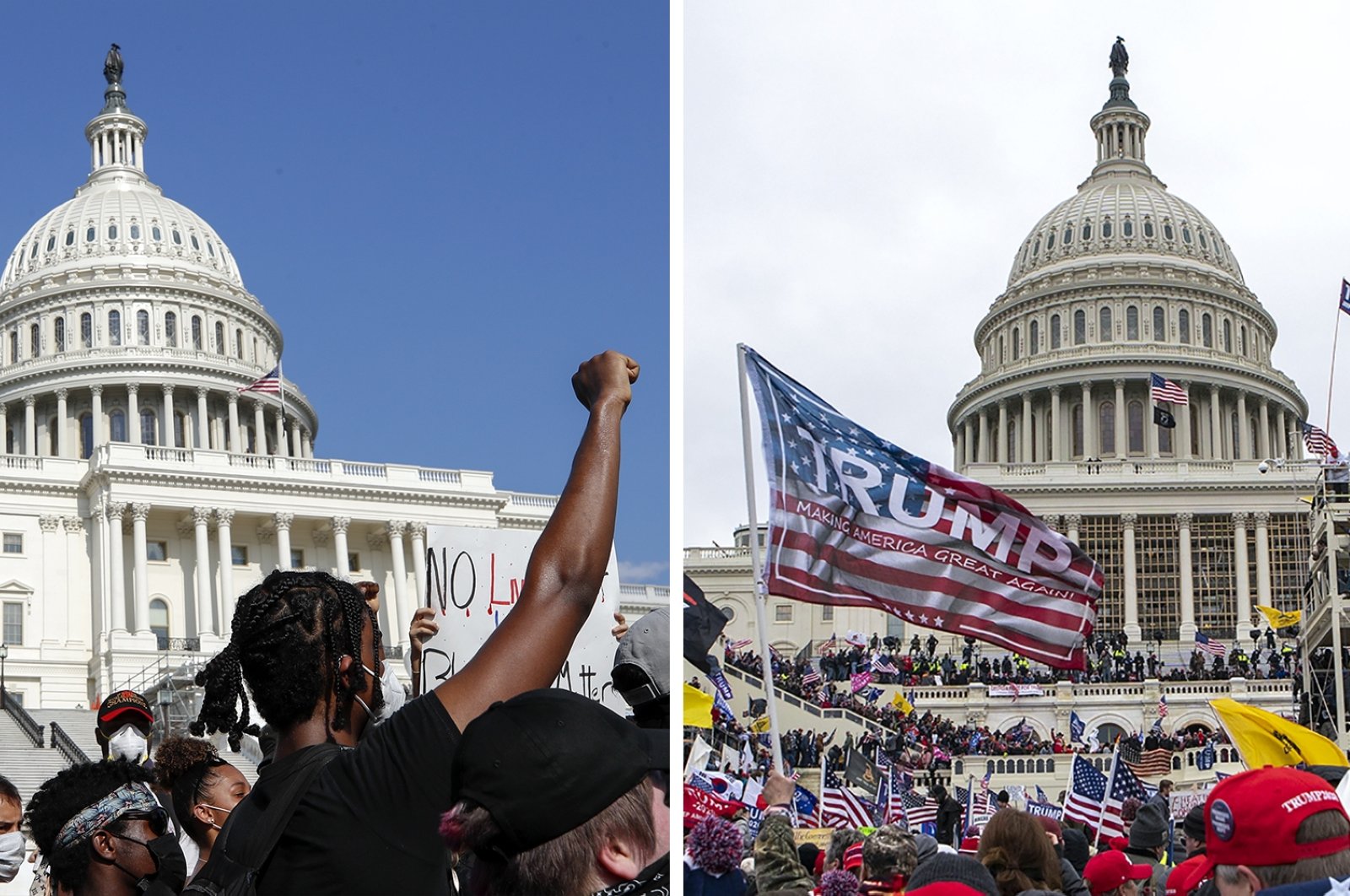 In this combination of photos, demonstrators (L), protest June 4, 2020, in front of the U.S. Capitol in Washington, over the death of George Floyd and on Jan. 6, 2021, supporters of President Donald Trump rally at same location. (AP Photos)
by ASSOCIATED PRESS Jan 07, 2021 9:37 pm
RECOMMENDED

The U.S. Capitol, Jan. 6, 2021: Barely more than a few dozen arrests. Several weapons seized, improvised explosive devices found. Members of a wilding group escorted from the premises, some not even in handcuffs.

The key difference? The first set of protesters were overwhelmingly black Americans and their allies. The second group was overwhelmingly white Americans who support outgoing President Donald Trump's baseless claims of election fraud.

The violent breaching of the halls of power on Capitol Hill by the insurrectionist group on Wednesday represents one of the plainest displays of a racial double standard in both modern and recent history.

“When Black people protest for our lives, we are all too often met by National Guard troops or police equipped with assault rifles, shields, tear gas and battle helmets,” the Black Lives Matter Global Network Foundation said in a statement.

“When white people attempt a coup, they are met by an underwhelming number of law enforcement personnel who act powerless to intervene, going so far as to pose for selfies with terrorists,” it said.

Broad and bipartisan condemnation of the insurrectionist group came swiftly as they had a nearly unhindered, hours-long run of the Capitol building complex, the Senate chamber and the House speaker’s office. The ordeal drew expressions of bewilderment and disbelief from some citizens who believed such a display was impossible in a democracy as revered as America’s.

However, the response to the mayhem is consistent with a long pattern of society’s coddling of racists and downplaying the violent white supremacist ideology that routinely places the grievances of white people above those of their black, often disenfranchised and downtrodden countrymen and women.

Since the founding of democracy in the blood and secession of the American Revolution, white people's destructive and obstructionist conduct has been couched in patriotism. It's been a fundamental part of a national myth about whose dissent and pursuit of redress for grievance is justified, and whose is not.

Newly sworn-in St. Louis Rep. Cori Bush, who was among the protesters to face down police and National Guardsmen in 2014 after police killed Michael Brown in Ferguson, Missouri, told The Associated Press that the race of the Capitol demonstrators played a big part in their ability to breach the congressional fortress.

Had the group been black, “we would have been laid out,” Bush said.

“The thing is, these are the same people who called us terrorists,” Bush continued. “Confederate flags, ‘don’t tread on me,’ ‘blue lives matter’ flags, the Trump flags — all of it symbolizes the same thing. It symbolizes racism and white supremacy.”

The show of force by law enforcement at the Capitol bore little resemblance to the lines of National Guardsmen and other police forces that assembled last year to protect luxury brand retailers against looting, government buildings against breaching and highways against marching by demonstrators across the country.

Rashad Robinson, president of Color of Change, the nation’s largest digital racial justice advocacy group, told the Associated Press (AP) that he sees it as “a clear example of how racism works in this country and the clear ways there are different sets of rules and different sets of outcomes based on what race you are.”

Although Wednesday's events represented one of the most alarming attacks on democratic institutions in recent memory, it wasn't the only one seen that day. Apparent Trump supporters forced disruptions at statehouses across the country, including in Georgia, New Mexico and Ohio.

And that wasn't the first time that such a disparate law enforcement response to such attacks drew national outrage and criticism of police. Last May, a large group of mostly white men carrying long rifles stormed the Michigan Statehouse building in Lansing over the governor's coronavirus pandemic shutdown mandates. There were few arrests and little condemnation from the White House.

In June, Trump administration officials had federal officers clear BLM protesters with flash-bang grenades and tear gas, to facilitate a now-infamous photo-op in front of a church near the White House.

BLM protesters and their supporters in Portland, Oregon, quickly pointed out Wednesday the huge disparity between Trump’s response to racial justice protests in the Pacific Northwest city and his encouragement of the violence in D.C.

On July 27, following his deployment of U.S. agents to quell weeks of demonstrations, Trump tweeted: “Anarchists, Agitators or Protestors who vandalize or damage our Federal Courthouse in Portland, or any Federal Buildings in any of our Cities or States, will be prosecuted under our recently re-enacted Statues and Monuments Act. MINIMUM TEN YEARS IN PRISON. Don’t do it!”

The thousands of Capitol building demonstrators, many who were egged on by the president’s speech at a Wednesday afternoon rally over his election loss, heard a much more compassionate message from their leader, albeit a defiant one.

“I know your pain, I know your hurt,” Trump said in a now-deleted video posted to his Twitter account. “You have to go home, now. ... We love you. You’re very special.”

On Wednesday, President-elect Joe Biden condemned the group and said the “scenes of chaos at the Capitol do not represent who we are.”

Former presidents Barack Obama, George W. Bush, Bill Clinton and Jimmy Carter also weighed in with expressions of consternation, some of them placing the blame squarely on Trump.

Adding to the cruelty of it all, some observers have noted, is the Capitol building's history. It was built with help from enslaved Africans, whose blood and sweat later allowed the union to meet there and strategize its battle against pro-slavery Confederates. On Wednesday, images emerged showing custodial staffers of color in the Capitol sweeping up the shards of glass and trash left behind by the demonstrators.

NAACP President Derrick Johnson said the people who violated the Capitol on Wednesday should not be seen as patriotic.

“This is not protesting or activism; this is an insurrection, an assault on our democracy, and a coup incited by President Trump,” Johnson said.