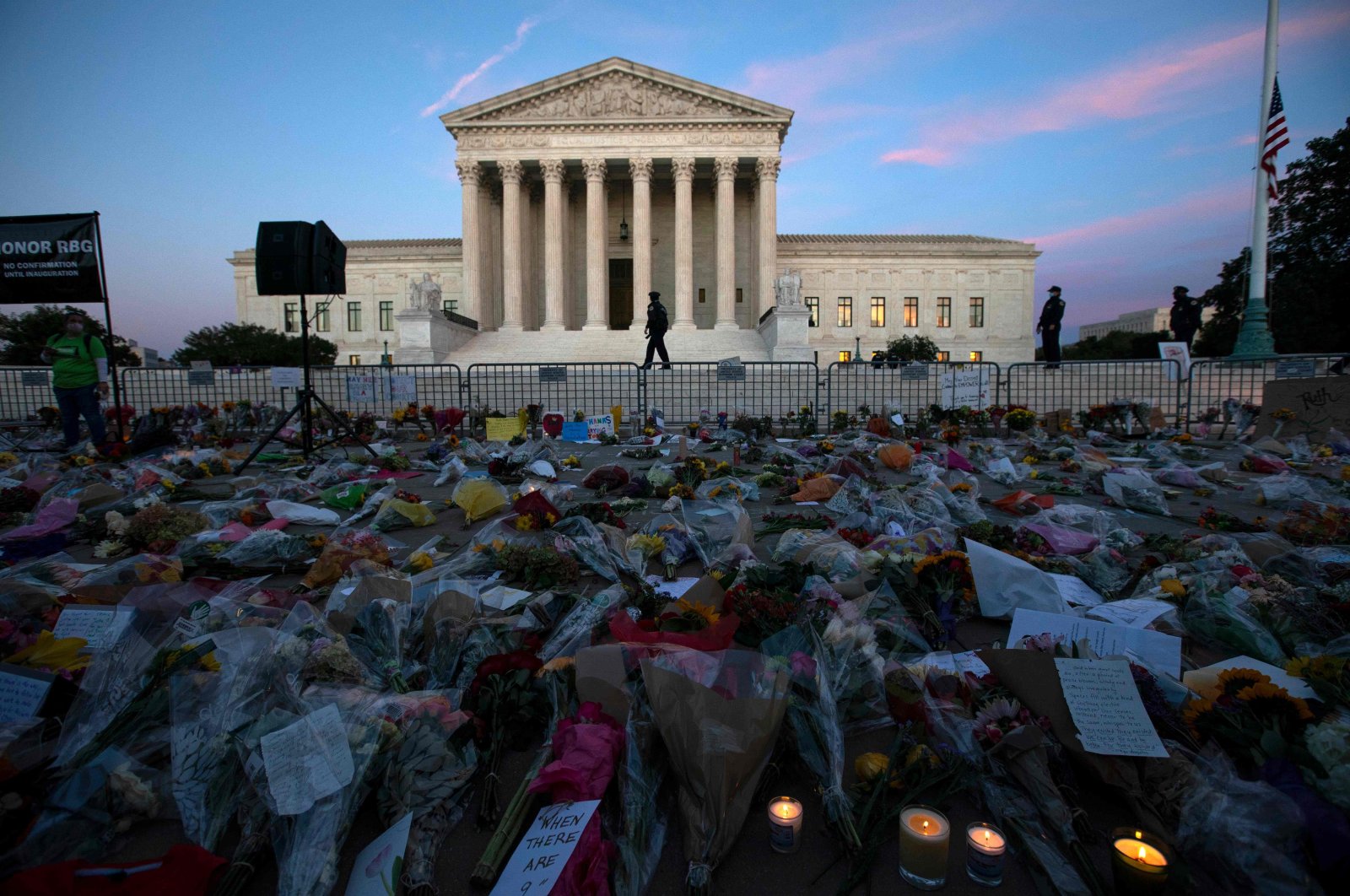 Flowers, candles and signs are pictured at a makeshift memorial outside of the U.S. Supreme Court as people pay their respects to Ruth Bader Ginsburg, Washington, D.C., Sept. 19, 2020. (AFP Photo)
by ASSOCIATED PRESS Sep 21, 2020 12:50 pm
RECOMMENDED

Joe Biden on Sunday slammed President Donald Trump and leading Senate Republicans for trying to jam through a replacement for the late Justice Ruth Bader Ginsburg and urged more senators to stand with a pair of GOP colleagues who oppose the election-season rush.

The extraordinary televised plea from the Democratic presidential candidate to Republican senators reflected the ferocious maneuvering that has followed Ginsburg's death at 87 on Friday. Her passing upended a campaign that had, until then, focused on Trump's handling of the coronavirus pandemic, the nation's economic collapse and racial unrest that has stoked protests in U.S. cities.

Trump said Monday he is looking at four or five jurists to replace Ginsburg and would nominate a replacement at the end of this week, while insisting that the Senate should vote before the coming election. "I will announce it either Friday or Saturday and then the work begins, but hopefully it won't be too much work," Trump told Fox News. He said he wanted to wait until after memorial services were over.

Senate Majority Leader Mitch McConnell was moving ahead swiftly with plans for confirmation hearings and votes.

Just hours before Biden spoke, a second Republican senator, Lisa Murkowski of Alaska, joined Sen. Susan Collins of Maine in opposing efforts to fill Ginsburg's seat before the next president is elected.

It takes four Republicans to break ranks to keep Trump's nominee off the court. Attention quickly focused on Sen. Mitt Romney of Utah, who voted to convict Trump on one count of impeachment, and Sen. Chuck Grassley of Iowa, a former chairman of the Judiciary Committee.

Biden acknowledged that those Republicans and others like them were his target audience when he warned that Trump's plan was an “abuse of power.”

“Uphold your constitutional duty, your conscience,” said Biden, speaking in battleground Pennsylvania. "Let the people speak. Cool the flames that have engulfed our country.”

There was little chance of calm overtaking the historic campaign as early voting progressed and the death toll from the virus reached 200,000 Americans.