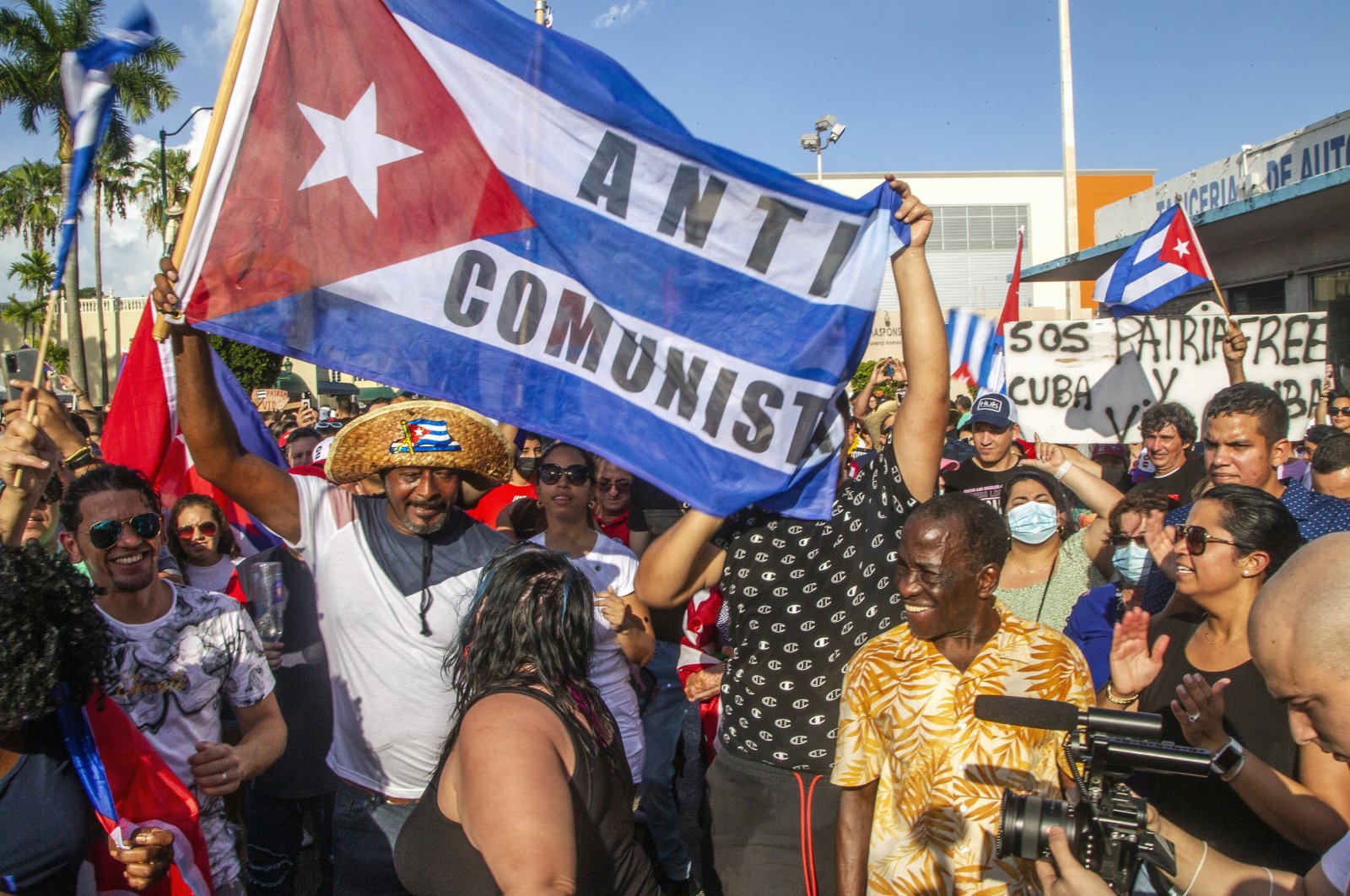 Cuban exiles rally at Versailles restaurant in Miami's Little Havana in support of protesters in Cuba as thousands of Cubans took to the streets in rare protests, Miami, Florida, U.S., Sunday, July 11, 2021. (AP Photo)
by DAILY SABAH WITH AGENCIES Jul 12, 2021 8:59 am

Thousands have taken to the streets in rare anti-government protests in Cuba, where the coronavirus pandemic and an economic crisis have caused frustration and anger

Chanting "freedom" and calling for President Miguel Diaz-Canel to step down, thousands of Cubans joined street protests from Havana to Santiago on Sunday in the biggest anti-government demonstrations on the Communist-run island in decades.

The protests erupted amid Cuba's worst economic crisis since the fall of the Soviet Union, its old ally, and a record surge in coronavirus infections. People voiced anger over shortages of basic goods, curbs on civil liberties and the authorities' handling of the pandemic.

Thousands took to the streets in various parts of Havana, including the historic center, their shouts of "Diaz-Canel step down” drowning out groups of government supporters waving the Cuban flag and chanting "Fidel."

Special forces jeeps, with machine guns mounted on the back, were seen throughout the capital and the police presence was heavy even long after most protesters had gone home by the 9 p.m. curfew in place due to the pandemic.

"We are going through really difficult times," Miranda Lazara, 53, a dance teacher, who joined the thousands of protesters who marched through Havana. "We need a change of system."

“I just walked through town looking to buy some food and there were lots of people there, some with signs, protesting,” local resident Claris Ramirez told Reuters news agency by phone. “They are protesting blackouts, that there is no medicine,” she added.

Thousands of people also gathered in downtown Havana and along parts of the seaside drive amid a heavy police presence, while protests took place later in the day in Palma Soriano in Santiago de Cuba province.

Diaz-Canel, who also heads the Communist Party, blamed the unrest on old Cold War foe the United States, which in recent years tightened its decades-old trade embargo on the island, in a televised speech on Sunday afternoon. Diaz-Canel said many protesters were sincere but manipulated by U.S.-orchestrated social media campaigns and "mercenaries” on the ground and warned that further "provocations” would not be tolerated, calling on supporters to confront "provocations."

The president was due to make another address to the nation at 9 a.m. on Monday, according to state-run media. Julie Chung, the acting undersecretary of the U.S. State Department's Office of Western Hemisphere Affairs, said it was deeply concerned by "calls to combat” in Cuba and stood by the Cuban people’s right for peaceful assembly.

In one area of Havana, protesters took out their anger on an empty police car, rolling it over and then throwing stones at it. Elsewhere, they chanted "repressors" at riot police. Some protesters said they went on to the streets to join in after seeing what was happening on social media, which has become an increasingly important factor since introducing mobile internet to Cuba two and a half years ago, although connections were patchy on Sunday.

The Caribbean island nation of 11 million inhabitants, where public dissident is usually restricted, has seen a growing number of protests over the past year, although nothing on this scale or simultaneously in so many cities. The anti-government demonstrations were the largest since the summer of 1994, said Michael Bustamante, an assistant professor of Latin American history at Florida International University.

"Only now, they weren't limited to the capital; they didn't even start there, it seems," he said.

"I just walked through town looking to buy some food, and there were lots of people there, some with signs, protesting,” resident Claris Ramirez said by phone. "They are protesting blackouts, that there is no medicine."

President Diaz-Canel visited the town, later saying in his broadcast remarks: "We are calling on all the revolutionaries in the country, all the Communists, to hit the streets wherever there is an effort to produce these provocations."

There were protests later on Sunday hundreds of miles to the east in Palma Soriano, Santiago de Cuba, where social media video showed hundreds marching through the streets, again confirmed by a resident.

"They are protesting the crisis, that there is no food or medicine, that you have to buy everything at the foreign currency stores, and on and on the list goes,” the resident, Claudia Perez, said.

The protests in Havana started around 3 p.m. and fizzled out around 8 p.m., with some protesters giving up after security forces thwarted their attempt to reach Revolution Square Cuba has been experiencing a worsening economic crisis for two years, which the government blames mainly on U.S. sanctions and the pandemic, while its detractors cite incompetence and a Soviet-style one-party system.

A combination of sanctions, inefficiencies and the pandemic has shut down tourism and slowed other foreign revenue flows in a country dependent on them to import the bulk of its food, fuel and inputs for agriculture and manufacturing.

The economy contracted 10.9% last year, and 2% through June of 2021. The resulting cash crunch has spawned shortages that have forced Cubans to queue for hours for basic goods throughout the pandemic.

Cuba has begun a mass vaccination campaign, with 1.7 million of its 11.2 million residents vaccinated to date and twice that many have received at least one shot in the three-shot process.

Still, the arrival of the delta variant has prompted cases to surge, with health authorities reporting a record 6,923 cases and 47 deaths on Sunday – twice as many as the previous week. Hospitals in the worst affected province have been overwhelmed.