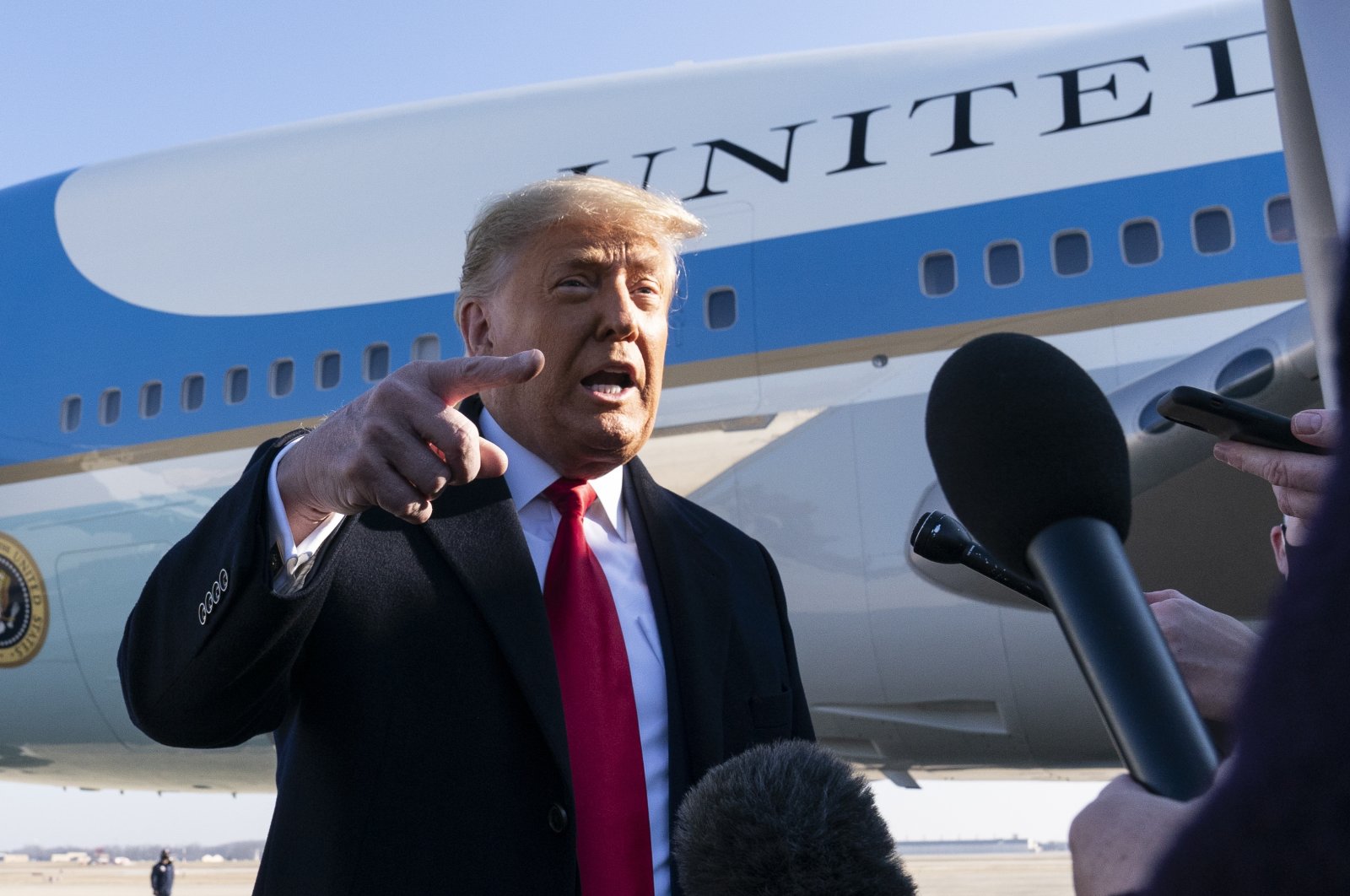 U.S. President Donald Trump emerged from isolation at the White House Tuesday to brand the likely second impeachment of his presidency "absolutely ridiculous" and warn that it has triggered "tremendous anger."

Speaking as he boarded Marine One at the White House for a trip to Texas, Trump called his scheduled impeachment in the House of Representatives on Wednesday a "continuation of the greatest witch hunt in the history of politics."

With only eight days left in his one-term administration, Trump finds himself alone, shunned by former supporters, barred by social media, and now facing a second impeachment over his instigation of a riot against Congress on Jan. 6.

His trip to Alamo, Texas, where he will tout claims of success in building a U.S.-Mexican border wall, is his first live public appearance since he rallied thousands of followers on the National Mall to march on Congress.

Although this is not the same Alamo as the famous fortress in another part of Texas, the trip marks something of a last stand for the Republican.

Ever since the Nov. 3 election, the real estate tycoon has been obsessively pushing a lie that he, not Democrat Joe Biden, was the real winner and last week, in a speech he described Tuesday as "totally appropriate," he called on the huge crowd to "show strength."

The crisis galvanized many of Trump's former boosters in the corporate and sporting world to turn their backs.

In Congress, where the Republican party has been in thrall to the populist leader for four years, even ultra-loyal senior figures like Sen. Lindsey Graham have finally told Trump that he must accept his election defeat.

Trump, however, remains in denial.

He has yet to congratulate Biden or urge his supporters to stand behind the incoming president after he is inaugurated on Jan. 20 – a gesture of political unity considered all but routine after U.S. elections.

And according to Axios, Trump and the top Republican in the House of Representatives, Kevin McCarthy, had a stormy phone conversation Tuesday in which Trump claimed that left-wing Antifa activists, not his supporters, attacked Congress.

"It's not Antifa," McCarthy reportedly responded. "I know. I was there."

When Trump continued to push his conspiracy theory that he was the true election winner, McCarthy reportedly interrupted, telling him: "Stop it. It's over. The election is over."

The House of Representatives will vote Tuesday on a longshot bid to get Vice President Mike Pence and the cabinet to invoke the U.S. Constitution's 25th Amendment, which would declare Trump unfit to perform his duties and install Pence as acting president.

This is unlikely to happen.

Although Pence is reportedly furious about Trump's behavior last week, the two met at the White House on Monday for the first time since the Congress attack and had "a good conversation," according to a senior administration official.

That signaled that whatever Pence and the dwindling number of White House officials feel, they are committed to keeping the presidency limping along until Jan. 20.

Still, with a string of cabinet officials quitting the government – most recently the acting head of the Department of Homeland Security Chad Wolf on Monday – it's also clear that Trump's grip on power is tenuous.

In an interview Tuesday on ABC News, Health Secretary Alex Azar did not dismiss outright the option of removing Trump, saying: "I'm not going to get into or discuss the 25th Amendment here."

Democrats will follow up the 25th Amendment vote with impeachment proceedings in the House on Wednesday. The single charge of "incitement of insurrection" is all but sure to get majority support.

The Republican-controlled Senate, however, is in recess until Jan. 19 and its leadership says there is no way to rush through an impeachment trial before Biden takes over the following day.

This means that Trump, who was acquitted in the Senate last year after his first impeachment, would not be forced out of office early.

Top Senate Democrat Chuck Schumer has reportedly floated the idea of using a rare parliamentary maneuver to force the chamber back into session under emergency circumstances, giving time for the start of an impeachment trial.

But not even all Democrats are gunning for a trial, worried that this would overshadow Biden's first days in office.

The new president will already face the challenges of an out-of-control COVID-19 pandemic, the stumbling vaccination program, a shaky economy, and now the aftermath of violent political opposition from parts of Trump's huge voter base.