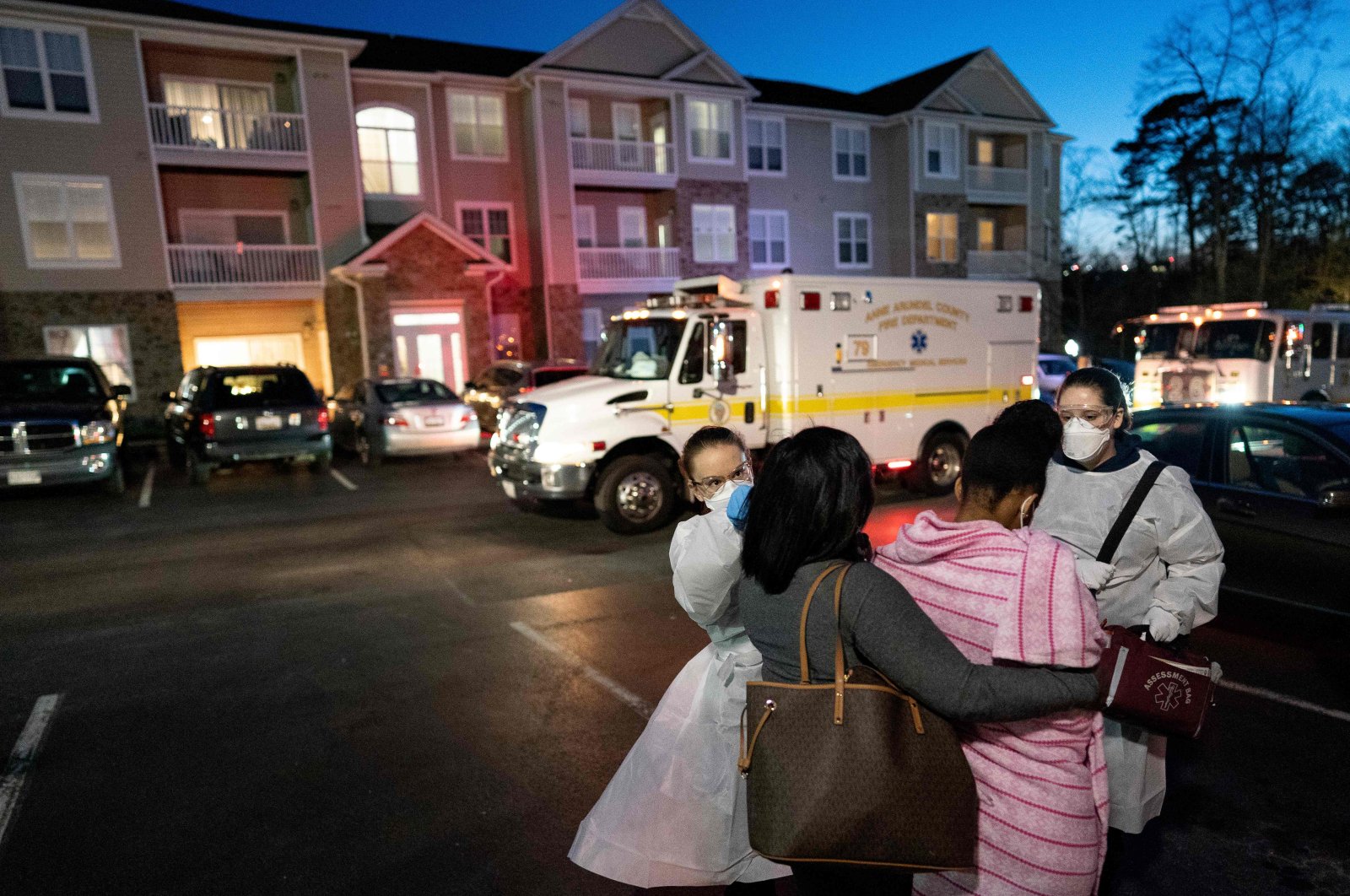 The U.S. death toll from the coronavirus eclipsed Italy's for the highest in the world Saturday at about 20,000.

According to the latest figures by the U.S.' Johns Hopkins University, the number of cases rose to 514,415. The death toll stands at 19,882, with more than 2,000 new fatalities reported by the university based in Baltimore, Maryland.

The global death toll from the virus surged past 107,000, with the U.S. quickly becoming the epicenter of the pandemic that first emerged in China late last year. With 19,468 dead, Italy has the second-highest global death toll. The U.S. has more cases than any other country, followed by Spain with 161,852 and Italy with 147,577.

The global infection rate now stands at more than 1.7 million, though with many countries only testing the most serious cases the real numbers are believed to be higher.

But President Donald Trump said that with the U.S. infection trajectory "near the peak" and social distancing working well, he was considering ways to re-open the world's biggest economy as soon as possible. He acknowledged the risk of higher death tolls if businesses restart too soon – even as the World Health Organization (WHO) cautioned countries against lifting lockdown measures too quickly.

"But you know what? Staying at home leads to death also," Trump said, pointing to the massive economic suffering for millions of Americans.

It is unclear when it will be possible to end the lockdown, with New York Governor Andrew Cuomo saying millions in the state will have to be tested before it can reopen.

New York hospitals are straining to treat a steady influx of patients, and the unclaimed dead – up to 25 a day – are now being buried in unmarked mass graves in a public cemetery in the state.

Public health experts have warned that the U.S. death toll could spike to 200,000 over the summer if unprecedented stay-at-home orders that have closed businesses and kept most Americans indoors are lifted after 30 days.

Trump, seeking re-election in November, has said he wants life to return to normal as soon as possible and that the sweeping restrictions on movement aimed at curbing the spread of the COVID-19 disease caused by the novel coronavirus carry their own economic and public-health cost.

"I'm going to have to make a decision, and I... hope to God that it's the right decision," he told reporters on Friday. "It's the biggest decision I've ever had to make."

Trump said the facts would determine the next move. Asked what metrics he would use to make his judgment, he pointed at his forehead: "The metrics right here, that's my metrics."

The current federal guidelines run to April 30. The president will then have to decide whether to extend them or start encouraging people to go back to work and a more normal way of life. Trump said he would unveil a new advisory council, possibly on Tuesday, that will include some state governors and will focus on the process of reopening the U.S. economy.

The government has said the economy purged 701,000 jobs in March. That was the most job losses since the Great Recession and ended the longest employment boom in U.S. history that started in late 2010.

While emergency measures such as stay-at-home orders were working, "they result in catastrophic damage to state economies," the governors said in a statement.

They also called on the U.S. Congress to appropriate $500 billion to meet the states' budgetary shortfalls that have resulted from the "unprecedented" crisis.

The two top Republicans in Congress on Saturday said they would continue to oppose Democrats' demands to include funding for items other than small business relief in a proposed coronavirus aid bill.

With more than 90% of the country under stay-at-home orders, the Christian calendar's holiest weekend has mostly featured services livestreamed or broadcast to worshippers watching from home. With many churches already short of funds, untouched collection plates at what is usually a busy time of the year are adding to the pressure on their finances.

A handful of holdout U.S. churches planned to go ahead with in-person services on Easter Sunday, saying their rights to worship outweighed public health warnings.

But there were glimmers of hope this week. Dr. Anthony Fauci, the government's top infectious disease expert, and other health officials pointed to declining rates of coronavirus hospitalizations and admissions to intensive care units – particularly in hard-hit New York state – as signs that social distancing measures are paying off.

New York City's public schools, which had been due to reopen on April 20 in a best-case scenario, will stay closed for the rest of the school year, Mayor Bill de Blasio said at a briefing on Saturday, adding that it was "the right thing to do."

The stay-at-home orders imposed in recent weeks across 42 states have taken a huge toll on American commerce, with some economists forecasting job losses of up to 20 million by month's end, raising questions about how long business closures and travel restrictions can be sustained.

The Trump administration renewed talk of quickly reopening the economy after an influential university research model this week lowered its U.S. mortality forecasts to 60,000 deaths by Aug. 4, down from at least 100,000, assuming social-distancing measures remain in place.

However, new U.S. government data show infections will spike over the summer if stay-at-home orders are lifted after 30 days, according to projections first reported by the New York Times and confirmed by a Department of Homeland Security official.

A new outbreak was reported on Friday in San Francisco, where 68 residents and two staff members at a homeless shelter tested positive, marking one of the largest known clusters of infections yet in such a facility anywhere in the country.

Around 36 employees became infected with COVID-19 at a beef production plant in Greeley, Colorado, according to meatpacking company JBS USA. Two employees have died, said the union representing workers at the plant.