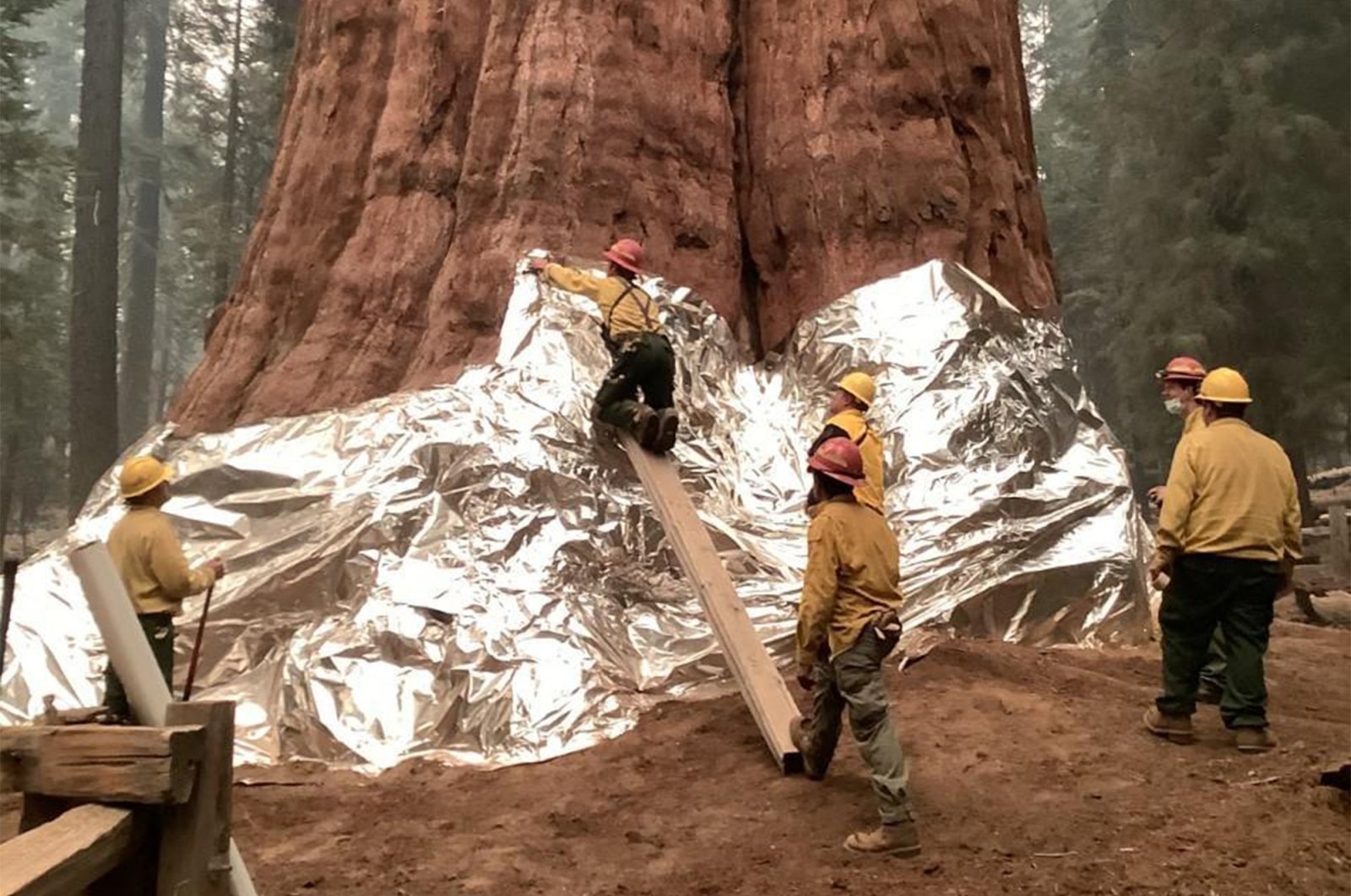 Firefighters wrap the base of the giant sequoia known as General Sherman with a fire-resistant blanket to protect it from the intense heat of approaching wildfires at Sequoia National Forest in California, U.S., Sept. 17, 2021. (National Park Service via AFP)
by French Press Agency - AFP Sep 18, 2021 12:07 pm
RECOMMENDED

Firefighters battling to protect the world's biggest tree from wildfires ravaging the parched western United States said Friday they are optimistic it can be saved.

"We have hundreds of firefighters there giving it their all, giving extra care," Mark Garrett, communications officer for the region's fire department, told Agence France-Presse (AFP), of the operation in Sequoia National Park.

Crews are battling the spreading Paradise and Colony fires, which have so far consumed 4,600 hectares (11,400 acres) of forest since they were sparked by lightning a week ago.

The blazes are threatening Giant Forest, a grove of around 2,000 sequoias that includes five of the largest trees on the planet – some up to 3,000 years old.

On Thursday, General Sherman was wrapped in fire-proof blankets and aluminum foil intended to protect its giant trunk from the worst of the flames.

By Friday, managers felt they had the upper hand, thanks in part to clearing of undergrowth and controlled burns that starve the fire of fuel.

"I think the most challenging part is the terrain here," said Garrett.

But "we haven't seen explosive fire behavior; it really slowed down and gave us a chance to get ahead of it."

Around 600 personnel are involved in the fight.

"We have folks up in the Giant Forest protecting structures and preparing everything. The fact is that they've been prescribed burning for the past 25 or 30 years so it is really prepared."

Millions of acres of California's forests have burned in this year's ferocious fire season.

Scientists say global warming, stoked by the unchecked use of fossil fuels, is making the area ever-more vulnerable to bigger and more destructive wildfires.

The enormous trees of the Giant Forest are a huge tourist draw, with visitors traveling from all over the world to marvel at their imposing height and extraordinary girth.

While not the tallest trees – California redwoods can grow to more than 90 meters – the giant sequoias are the largest by volume.

Smaller fires generally do not harm the sequoias, which are protected by a thick bark and often only have branches 30 meters above the ground.

But the larger, hotter blazes that are laying waste to the western U.S. are dangerous to them because they climb higher up the trunks and into the canopy.