US health care system scrambles to cope with coronavirus pandemic 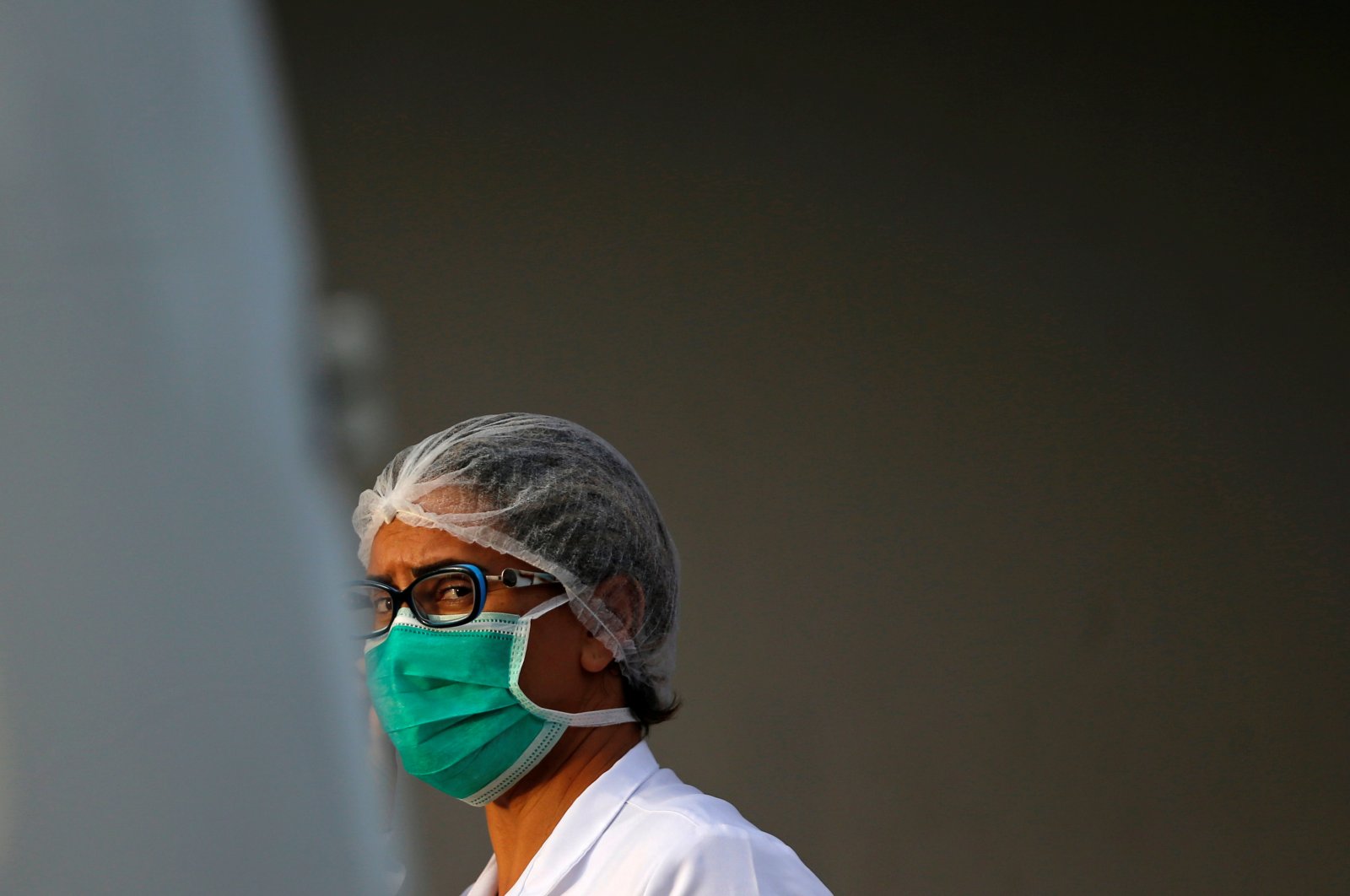 A nurse wears a protective face mask at the North Wing Regional Hospital after reports of the coronavirus in Brasilia. Nurses are usually the first to pay the price of an overloaded health care system. (Reuters Photo)
by Mindy Ann Yartaşı Mar 11, 2020 11:17 am

Understaffed hospitals, understocked test kits and high medical costs have put a strain on the U.S.’ strategy to deal with the COVID-19 outbreak

Scarce equipment, 44 million uninsured citizens, testing delays and staff shortages coupled with chronically high medical costs are expected to widely hinder the U.S.’ response to the coronavirus epidemic. The American health care system is bracing to face the spread of the novel coronavirus, or COVID-19, head-on. The risk it poses not only to the public but also to health care professionals has led to questions about whether the system could handle a full-blown outbreak.

With the American death toll at more than 30 and the number of verified cases at around 800 and rising across more than 30 states, the U.S. health care system has been criticized by both those working in the sector and people seeking treatment. A lack of public confidence hovers over the industry about whether it can provide a safe environment for patients infected with the virus as well as for those wanting tests to detect a possible infection and medical staff working closely with those seeking treatment.

Frustrating both concerned citizens and health professionals alike, doctors in the U.S. are predominantly only testing patients exhibiting signs of a possible COVID-19 infection. Symptoms of infection, including a fever, cough or shortness of breath, can appear two to 14 days after exposure, but research has found the virus can be transmitted from an infected individual with no obvious symptoms. With the possibility of pre-symptom transference, health experts believe testing all suspected cases should be a new priority for containing the virus’s spread.

With a rising number of infections, the Center for Disease Control (CDC) continues to be widely criticized for lagging in widespread testing and confirming suspected cases. The CDC’s rationed testing is a result of a dangerously limited quantity of kits. So few tests mean their administration is widely based on the severity of the cases. This methodology further puts the public at risk by ignoring possible infections that have yet to present symptoms. For one case in California last month, it took four days and trips to two hospitals for a patient with COVID-19 to be tested due to not meeting the CDC’s current requirements.

In an anonymous letter to Business Insider, a self-quarantined nurse in California expressed her frustration with the CDC for not providing her a test after caring for an infected patient. "This is not the ticket dispenser at the deli counter; it's a public health emergency!... I am a registered nurse, and I need to know if I am positive before going back to caring for patients," she said. The nurse also stressed that leaving medical staff untested requires them to gamble with their infection status. "I am appalled at the level of bureaucracy that's preventing nurses from getting tested.... Delaying this test puts the whole community at risk," she stressed.

The frustrated nurse is just one of thousands having to stay home to do their part in preventing the virus’s spread. However, one in four of the more than 32 million American workers does not have paid sick leave. Some workers, particularly those in low paying jobs in places like restaurants, stores and airports, do not even have the option to take paid sick days. They must either show up and interact with customers, risking the further spread of the virus, or forfeit their paychecks and possibly their jobs. As a result, they are forced to choose between their health, the public’s health and their livelihoods, while exposing not only coworkers but also customers, fellow pedestrians and the general public to possible transmission, accelerating the outbreak.

According to Nicolas Ziebarth, an associate professor of economics at Cornell University in the College of Human Ecology: “When people gain access to paid sick leave, the spread of the flu decreases. ... It’s important in this situation that when you have people who have symptoms and don’t feel well, that they do not go to work and spread diseases.” Slowing the spread buys time for the government to implement steps to slow the infection rate and allows more time for health officials to develop a vaccine.

Employee outrage led Vice President Mike Pence on Monday to hint at the possible introduction of a new economic package that would provide mandated sick leave for workers but provided no specifics or a timeline for its enforcement. As it is, Washington already lags far behind European countries, which offer some variety of paid sick leave across the board. Echoing the public’s frustration, U.S. Sen. Bernie Sanders said via Twitter on Saturday, "In the richest country in the history of the world, it is an outrage that we do not guarantee paid leave for everyone."

For citizens who find themselves infected, seeking medical treatment is a challenge on its own. The U.S. does not have universal health care and lacks a uniform health care system. It also has some of the most expensive health care costs in the world. With the average amount spent on health per person $3,018 worldwide, the American figure is more than twice as expensive at $8,047. More than 40 million Americans are uninsured, and 44 million are underinsured, often having to pay high out-of-pocket costs and deductibles. As a result, millions of Americans have medical debt. The high cost of health care for those with little to no insurance coverage often prevents people from seeking medical attention, only going to the hospital for emergencies.

Facing overwhelming costs, Medicare, Medicaid and major private insurers have promised to cover the cost of the test to detect a COVID-19 infection. Likewise, copayments, deductibles and other out-of-pocket costs are also being waved to encourage people to get tested. However, once patients test positive, additional medical expenses can quickly pile up. For those without insurance, the average outpatient visit costs $500, and the average in-patient, or overnight, stay costs $22,000. Even for those with insurance, the average insurance copayment for an emergency visit is $180 and around $300 for the hospital admission. According to a U.S. Bureau of Labor Statistics (BLS) report, a full-time salaried worker in 2019 earned $936 a week, so even those with insurance would be hard-pressed to cover high copayments and deductibles for treatment. High costs are bound to deter many from seeking treatment. Avoidance of medical care could lead to a higher transmission rate between untreated infected people and the rest of the population.

To make matters worse, hospitals and other medical facilities across the country were already widely understaffed before the virus hit. Hospitals in the U.S. often run at or near full capacity under normal circumstances and are unable to quickly increase their services for large-scale health emergencies. According to Johns Hopkins Center for Health Security: "There are currently shortages of health care workers of all kinds. Emergency departments are overcrowded and often have to divert patients to other hospitals."

Hundreds of American health workers are already in quarantine after being exposed to the virus. At least five have tested positive for the infection. If large numbers of health professionals contract the virus at once and are quarantined at home, the situation could be dire for the public seeking treatment.

To counter staff shortages, the CDC has revised its requirement of home quarantine for health workers exposed to COVID-19 but not showing symptoms. However, the limited number of tests remains a serious concern. Those working in the health sector are especially vulnerable to infectious diseases due to their repeated exposure to viral particles. Long, stressful work hours also put a strain on their immune system, making them more vulnerable to infections.

Staffing issues aside, the hospitals are ill-equipped to deal with large-scale infections. The U.S. Department of Health and Human Services has estimated that in a confirmed epidemic, 865,000 would need hospitalization for a “moderate” outbreak, while a “severe” epidemic could see up to 9.9 million seeking medical treatment. Health agencies have reported that less than 100,000 intensive care unit beds are available countrywide. Likewise, if a widespread outbreak does occur, equipment shortages, including ventilators, are also expected.