US marks end of slavery amid tensions over racist past, present 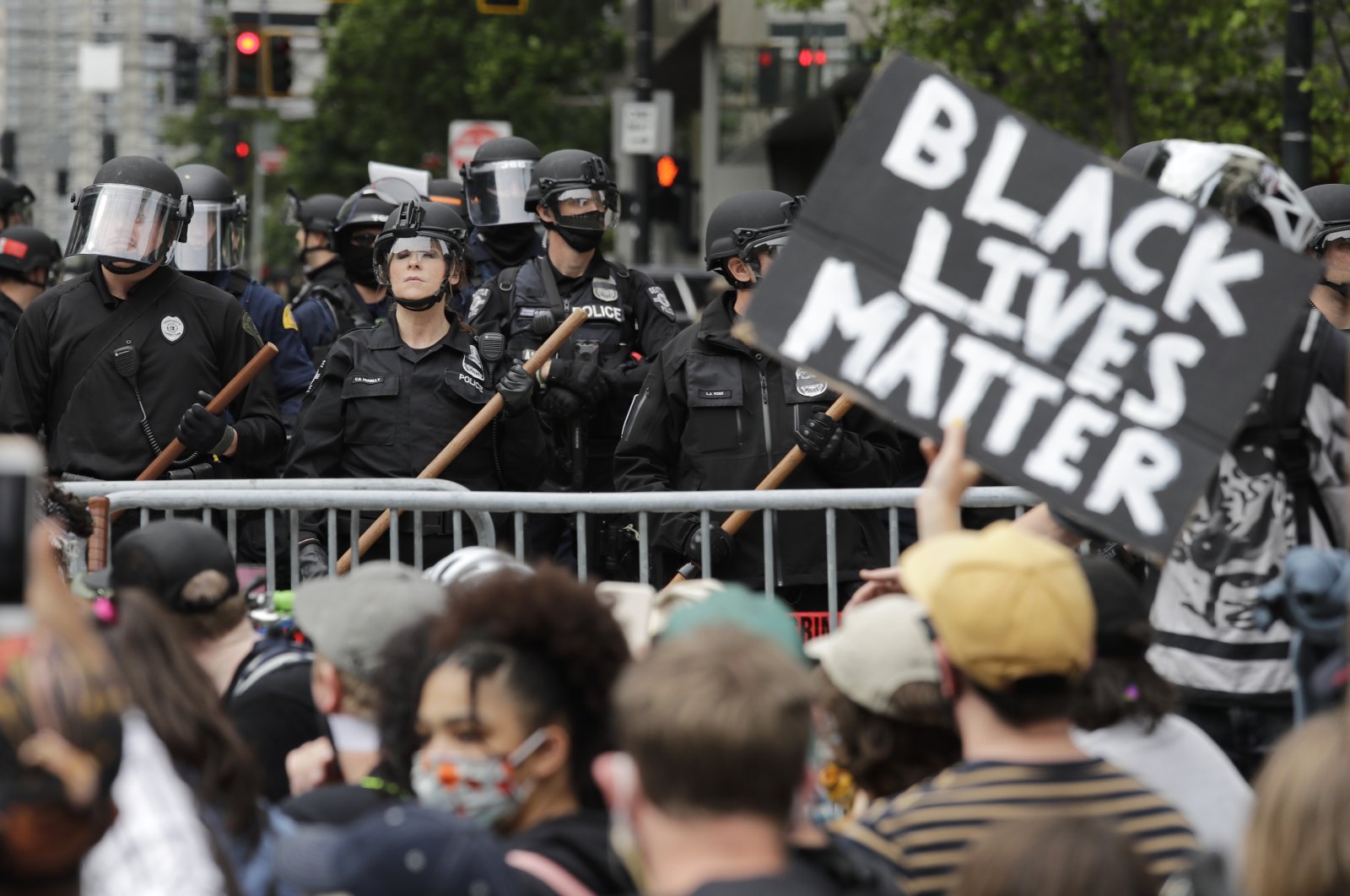 Police officers behind a barricade look on as protesters fill the street in front of Seattle City Hall, following protests over the death of George Floyd, a black man who was killed in police custody in Minneapolis, Seattle, Washington, U.S., June 3, 2020. (AP Photo)
by French Press Agency - AFP Jun 19, 2020 10:45 am
RECOMMENDED

The United States marks the end of slavery Friday by celebrating Juneteenth, with the unofficial annual holiday taking on renewed significance as millions of Americans confront the nation's living legacy of racial injustice.

Demonstrations, prayers and cultural celebrations with food and music will enliven communities from New York to Los Angeles to honor the day in 1865 when a Union general proclaimed in Galveston, Texas that all slaves were free.

Some 155 years after the demise of the pro-slavery Confederacy, several tragedies this year have led the country into a renewed reckoning on race.

They have also energized a quest for equality among African Americans who decry how systemic racism and injustice have been allowed to fester in the world's flagship democracy.

Forty-six-year-old African-American George Floyd was killed on May 25 when a white Minneapolis police officer pressed his knee onto Floyd's neck for nearly nine minutes, ignoring multiple pleas of "I can't breathe."

Video of the horrific incident triggered coast-to-coast protests against racial injustice and police brutality. Millions took to the streets under the "Black Lives Matter" banner.

Further fueling tensions, an officer in Atlanta last week shot dead a black man who was running away after a scuffle with police.

Both the offending officers in the incidents have been charged with murder, while the killings have spurred U.S. lawmakers to introduce sweeping new police reforms.

As Americans grapple with their country's legacy, Juneteenth has the potential to amplify calls for action and reform.

Several commemorations have gone virtual to account for the coronavirus pandemic, but many are going ahead as planned or with modifications such as social distancing and mask-wearing guidelines.

Protests are scheduled in cities like Tulsa, Oklahoma, which hosts a daylong "I, Too, Am America" rally for justice.

U.S. President Donald Trump used incendiary language to level criticism at protesters following Floyd's death, and he added fuel to the fire when he scheduled a huge campaign rally on Juneteenth in Tulsa, his first since the pandemic began.

Trump faced an outcry over his provocative choice of date and location – Tulsa having suffered one of the country's worst racist massacres, in 1921, when as many as 300 black Americans were killed – and subsequently changed the rally to Saturday.

Dozens of events Friday throughout New York will mark the holiday, including a march to City Hall demanding "justice, dignity and equality" for black Americans.

Pressure has mounted for Juneteenth to be declared a national holiday. New York and Virginia have moved to make it an official state holiday.

Several major U.S. companies including Nike and Twitter recently announced they were making Juneteenth a paid holiday for employees.

Floyd's death has reverberated nationwide. Several monuments depicting Confederate generals or soldiers have been toppled by protesters or ordered removed by local governments.

The auto-racing series NASCAR banned Confederate flags at its events.

And in the U.S. Capitol, House Speaker Nancy Pelosi ordered the removal Thursday of four statues of 19th-century lawmakers who served in the Confederacy.

Despite the progress made with the civil rights movement of the 1950s and 1960s, America's black minority – about 13% of the population – has struggled under systemic inequality.

Black household wealth is a fraction of that of whites, their health care outcomes are poorer, they are under-represented in U.S. politics and are jailed at far higher rates than whites in an era of mass incarceration.

As Juneteenth approached, Trump insisted he delayed his rally to June 20 out of respect.

"Nobody had ever heard of it," Trump claimed in a Wall Street Journal interview Thursday, apparently oblivious that his White House annually releases a statement commemorating the day.

"I did something good," he added. "I made Juneteenth very famous."