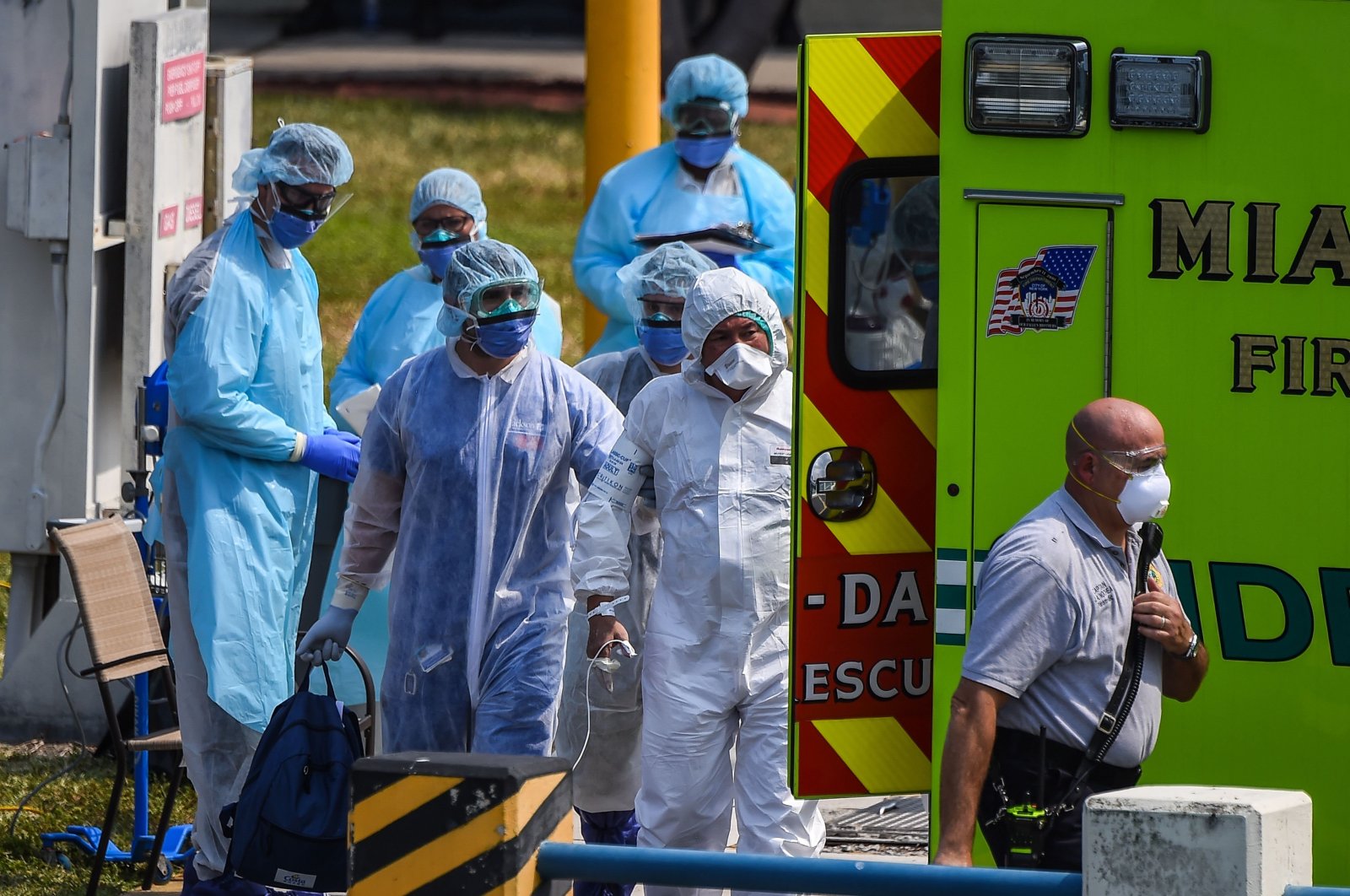 Medics assist a sick crew member from one of two boats which requested assistance, as they arrive at the US Coast Guard Base in Miami, on March 26, 2020. (AFP Photo)
by DAILY SABAH WITH AGENCIES Sep 16, 2020 1:56 pm
RECOMMENDED

The United States remains the worst-hit nation in the world as the country stands poised to record the 200,000th coronavirus fatality.

The U.S. has reported nearly 6.6 million cases of COVID-19, the disease caused by the virus, the highest number in the world, accounting for 20% of cases globally, despite the U.S. making up just 4% of the world's population.

As the ongoing surge of infections in several states has fueled the outbreak in the country, top U.S. infectious disease expert Dr. Anthony Fauci called the state of Vermont’s ongoing efforts to control the coronavirus a model for the nation.

Vermont has the lowest rate of positive tests for the coronavirus in the country and the lowest number of cases per capita. The state has conducted rapid testing and contact tracing of potentially infected individuals and is continuing its gradual reopening. Vermont has recorded 1,700 total coronavirus cases and 58 confirmed deaths.

Global cases are rapidly approaching 30 million, with more than 930,000 known COVID-19 deaths, as the World Health Organization (WHO) envoy warned the pandemic was "still at the beginning."

Coronavirus infections in India soared past 5 million on Wednesday. India, home to 1.3 billion people, has reported some of the highest daily cases jumps in the world recently, as a World Health Organization (WHO) special envoy described the global pandemic situation as "horrible" and "grotesque." The spread of the virus has accelerated in some of the most populous parts of the world such as India, where the latest million infections were detected over just 11 days.

U.S. President Donald Trump on Tuesday said a vaccine against the deadly coronavirus could be three or four weeks away, despite cautionary notes sounded by some U.S. public health officials about that accelerated timeline. Trump, speaking at a town hall hosted by ABC News in Philadelphia, defended his handling of the coronavirus crisis and said a vaccine could be ready for distribution before the U.S. presidential election on Nov. 3.

"We're very close to having a vaccine," he said. "If you want to know the truth, the previous administration would have taken perhaps years to have a vaccine because of the FDA and all the approvals. And we're within weeks of getting it ... Could be three weeks, four weeks."

Earlier this month, Fauci told CNN that most experts believed a vaccine would be ready by November or December. "It is conceivable that you can have it by October, though I don't think that that's likely." Other experts say a scientifically credible vaccine will not be available until early 2021.