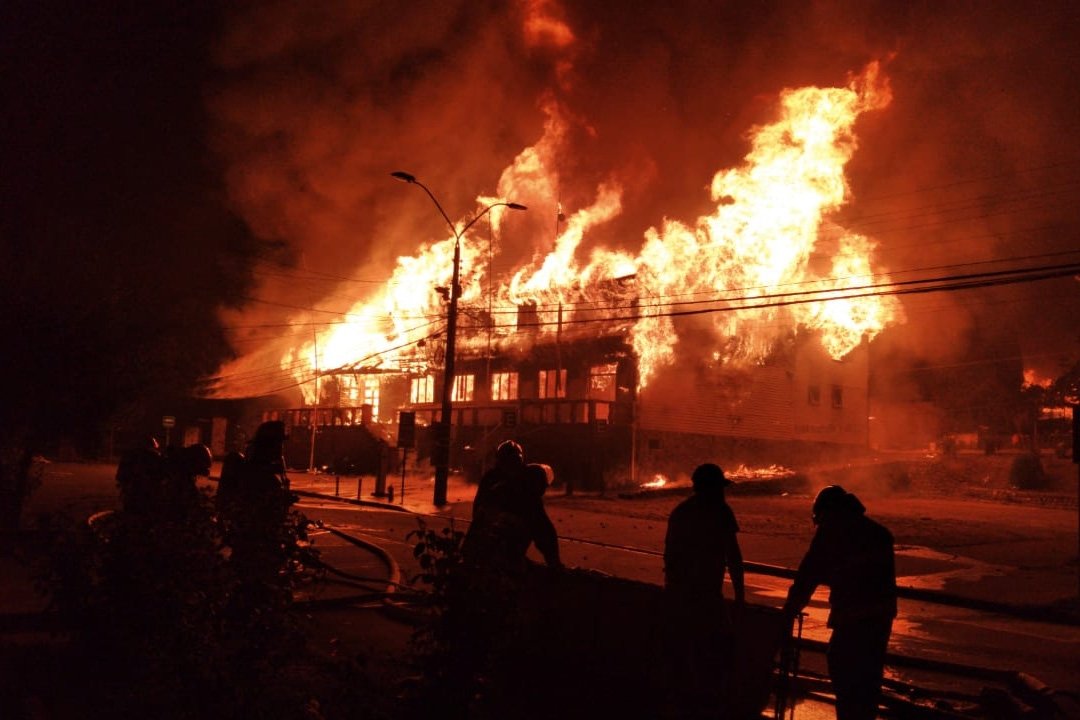 The building of the Municipality of Panguipulli set on fire by protesters during a demonstration over the murder of a street artist by the local police, Feb. 5, 2021. (AFP Photo)
by French Press Agency - AFP Feb 06, 2021 1:42 pm
RECOMMENDED

Hundreds poured into the streets and a public building was burned down in protest of the fatal police shooting of a street artist in Chile.

The incident took place in Panguipulli after the juggler refused to cooperate with a police search by two uniformed men.

The check resulted in a dispute that ended with one of the agents firing at the street artist, according to a video widely circulated by local channels and on social media.

"We regret the loss of this young juggler. I hope that justice is done," Ricardo Valdivia, Panguipulli's mayor, told Radio Cooperativa.

Witnesses of the incident started to shout at the officers, leading to violent demonstrations and the burning of the building.

Protesters set fire to several other buildings and set up barricades in streets around the town before riot police fired tear gas and water cannons, according to images from local media.

A video posted on Facebook by local official Carlos Duran showed several fires burning across the town and smoke rising above its skyline.

The local police force backed the officer who shot the artist.

Boris Alegria, lieutenant colonel of the Panguipulli police, said in a video that the officer used his weapon to "safeguard his own life" in "legitimate self-defense."

The Chilean government ordered the force to hand over all records of the incident to the Public Ministry, which has launched an investigation.

Panguipulli, which has a population of 32,500, is located 850 kilometers (528.17 miles) south of the capital Santiago, where residents banged pots and pans in anger over the killing.

Chileans took to social media to call for reforms and condemn the shooting.

"In a police force with a minimum professional level this should not have happened," tweeted writer Pedro Gandolfo.

"A shameful act with a tragic result."