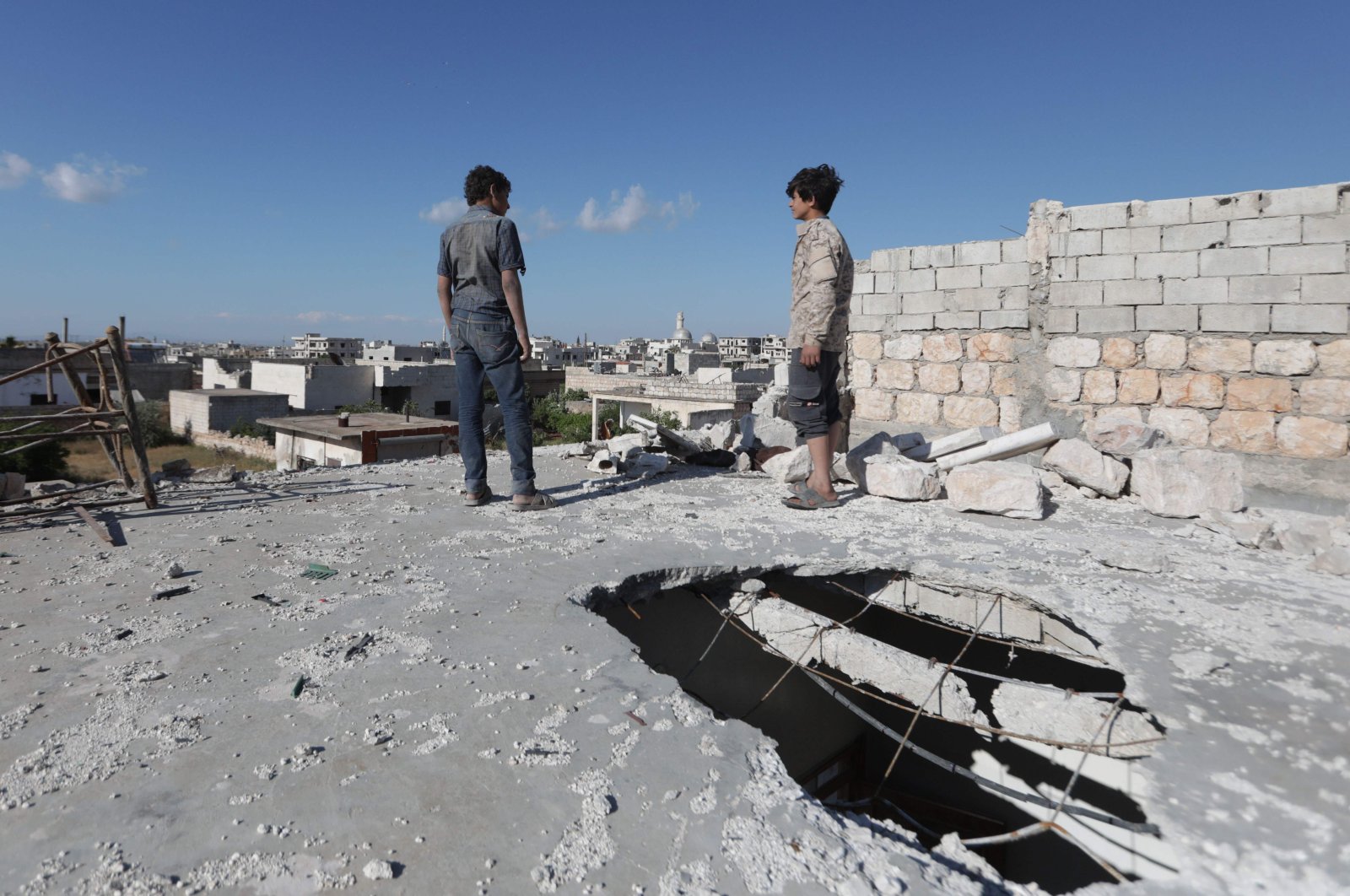 Syrian youths stand on May 6, 2020 on the damaged roof of a building in al-Nayrab, a town ravaged by pro-Assad forces' bombardment near the M4 strategic highway, in Syria's northwestern Idlib province (AFP Photo)
by Anadolu Agency May 11, 2020 6:10 pm
RECOMMENDED

Amnesty International has said that the United Nations Security Council must not cut aid to civilians in Idlib, Syria, as a U.N. resolution allowing humanitarian assistance to the region draws close to expiration.

Amnesty's call came on Saturday after it published a 40-page report that showed 18 cases, mostly in the first two months of the year, where the Syrian government and Russian forces targeted schools and hospitals in opposition-held areas, including Idlib, Aleppo and Hama.

The report, titled ‘Nowhere is safe for us': Unlawful attacks and mass displacement in north-west Syria contained intercepted Russian and Syrian flight communications corroborated by eyewitness accounts and expert analysis of satellite imagery.

The U.K.-based rights group said that Syrian and/or Russian attacks severely damaged or destroyed ten medical facilities in Idlib and Aleppo between December 2019 and February 2020, killing nine members of staff.

One attack comprised of three airstrikes that hit the al-Shami hospital in Ariha town, Idlib Governorate, on Jan. 29, killing 11 civilians and injuring over 30 others, and was unlawfully carried out by Russian forces, according to Amnesty.

Heba Morayef, Amnesty International's Middle East and North Africa Director, said: "Even by the standards of Syria's calamitous nine-year crisis, the displacement and humanitarian emergency sparked by the latest onslaught on Idlib has been unprecedented.

"The U.N. Security Council must not cut the vital lifeline of cross-border humanitarian aid while thousands of lives hang in the balance.

"The latest offensive continued an abhorrent pattern of widespread and systematic attacks aimed at terrorizing the civilian population.

"Meanwhile, Russia has continued to provide invaluable military support – including by directly carrying out unlawful airstrikes – despite evidence that it is facilitating the Syrian military's commission of war crimes and crimes against humanity.

"U.N. officials have already called Idlib a humanitarian ‘horror story' – this will only worsen unless the Security Council sees beyond political ploys and sustains the precious lifeline of cross-border humanitarian aid."

The latest fighting in Idlib has forced almost one million people, over 80% of whom are women and children, to flee towards Turkey.

In July 2014, the U.N. Security Council unanimously passed a resolution allowing delivery of cross-border air to northwestern Syria and other opposition-held areas without the Syrian government's consent.

The resolution, which has since been extended a number of times, albeit with increased difficulty and reduced scope, is set to expire on July 10.

The Syrian regime and its backers want the aid to be channeled through Damascus, making it more difficult for the U.N. and humanitarian agencies to deliver timely and sustained aid.

The regime has previously sought to restrict aid requirements through bureaucratic requirements and blacklisting aid workers associated with opposition-held areas.