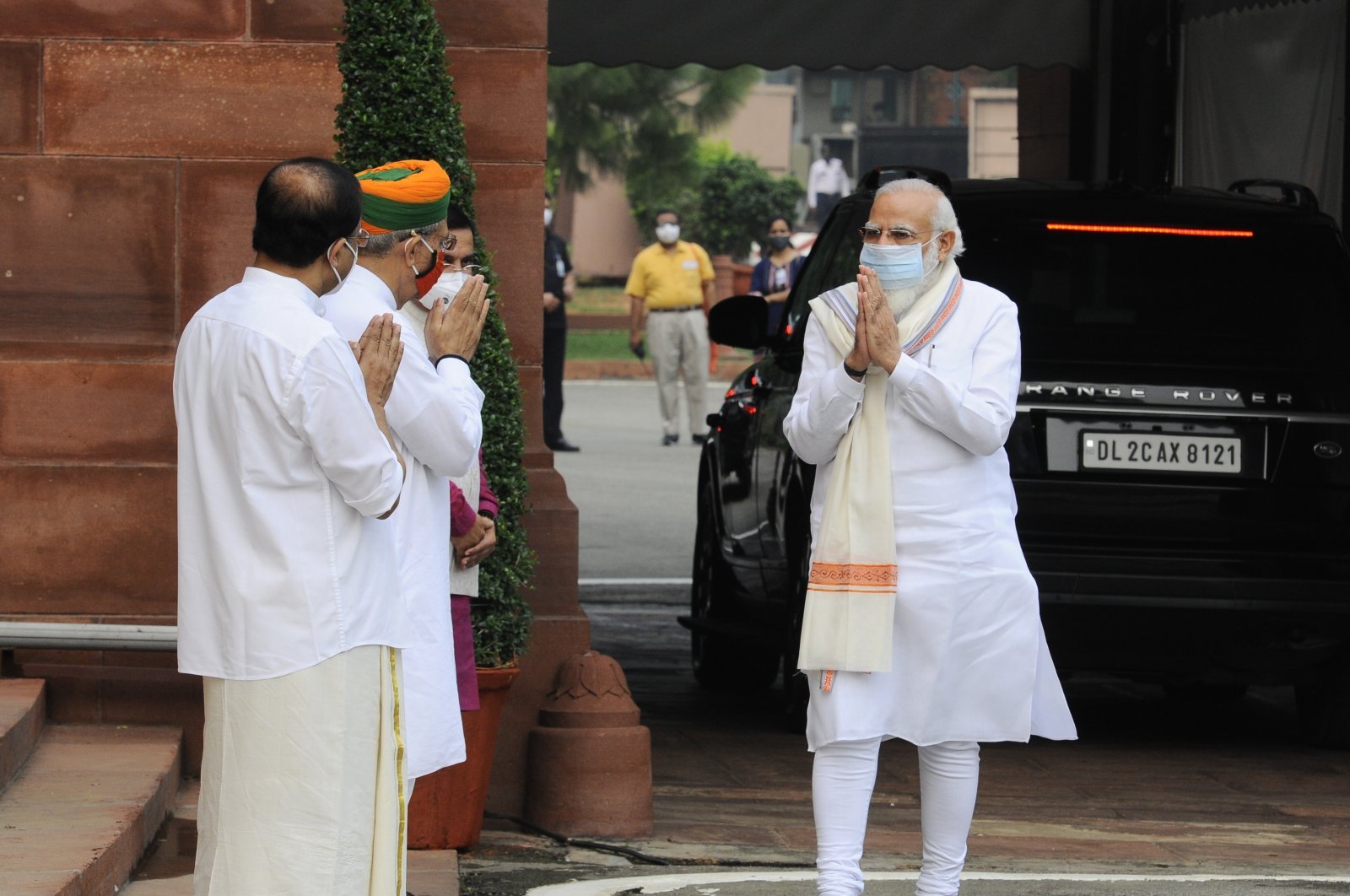 Indian Prime Minister Narendra Modi (R) is received by his ministerial colleagues as he arrives at the parliament in New Delhi, India, Sept. 14, 2020. (AP Photo)
by Compiled from Wire Services Sep 14, 2020 6:01 pm
RECOMMENDED

At least 25 Indian parliamentarians tested positive for the coronavirus on the first day of the session as the country reopened its parliament on Monday after more than five months of closure, even as India continues to report the most daily new infections of the coronavirus in the world and daily virus deaths remain above 1,000.

According to Indian local broadcaster NDTV, some 25 members of parliament have tested positive for COVID-19 in the mandatory tests carried out before the session started on Monday morning. It also said that about 56 people tested positive during the RT-PCR Tests conducted in the parliament building by Sept. 12. The number includes officials, media persons and lawmakers.

The 18-day session comes as coronavirus infections in India surge faster than anywhere else in the world. The more than 92,000 new cases added Monday raised India's totals past 4.8 million. More than 79,700 people have died.

"All safety measures have been taken to conduct the session as per guidelines issued for COVID-19,” a government statement said. The statement highlighted that all lawmakers must wear masks and follow other sanitization protocols, sit on seats separated by transparent plastic sheets and keep their meetings limited.

The Question Hour, when lawmakers ask questions to ministers and hold them accountable for the functioning of their ministries, will not be allowed.

Opposition parties have protested the decision to do away with the Question Hour and are expected to grill the government over its handling of the pandemic, the nosediving economy and simmering tensions with China.

The main opposition Congress party leader Rahul Gandhi targeted Prime Minister Narendra Modi over the spike in virus cases and accused the government of implementing the lockdown without a plan.

"Unplanned lockdown was the gift of one man’s ego, which led to the spread of coronavirus across the country,” Gandhi tweeted Monday.

Millions of Indians lost their jobs instantly and tens of thousands of migrant workers, out of money and fearing starvation, poured out of cities and headed back to villages when Modi ordered the nationwide lockdown on March 24.

The unprecedented migration not only hollowed out Indian's economy but also spread the virus to the far reaches of the country. Restrictions were eased since to revive the economy, even as virus cases grew.

In his tweet, Gandhi also referred to a video Modi shared last month on Instagram where he was strolling with peacocks at his residence.

Gandhi said the people of India have to "save their own lives because PM is busy with peacocks.”