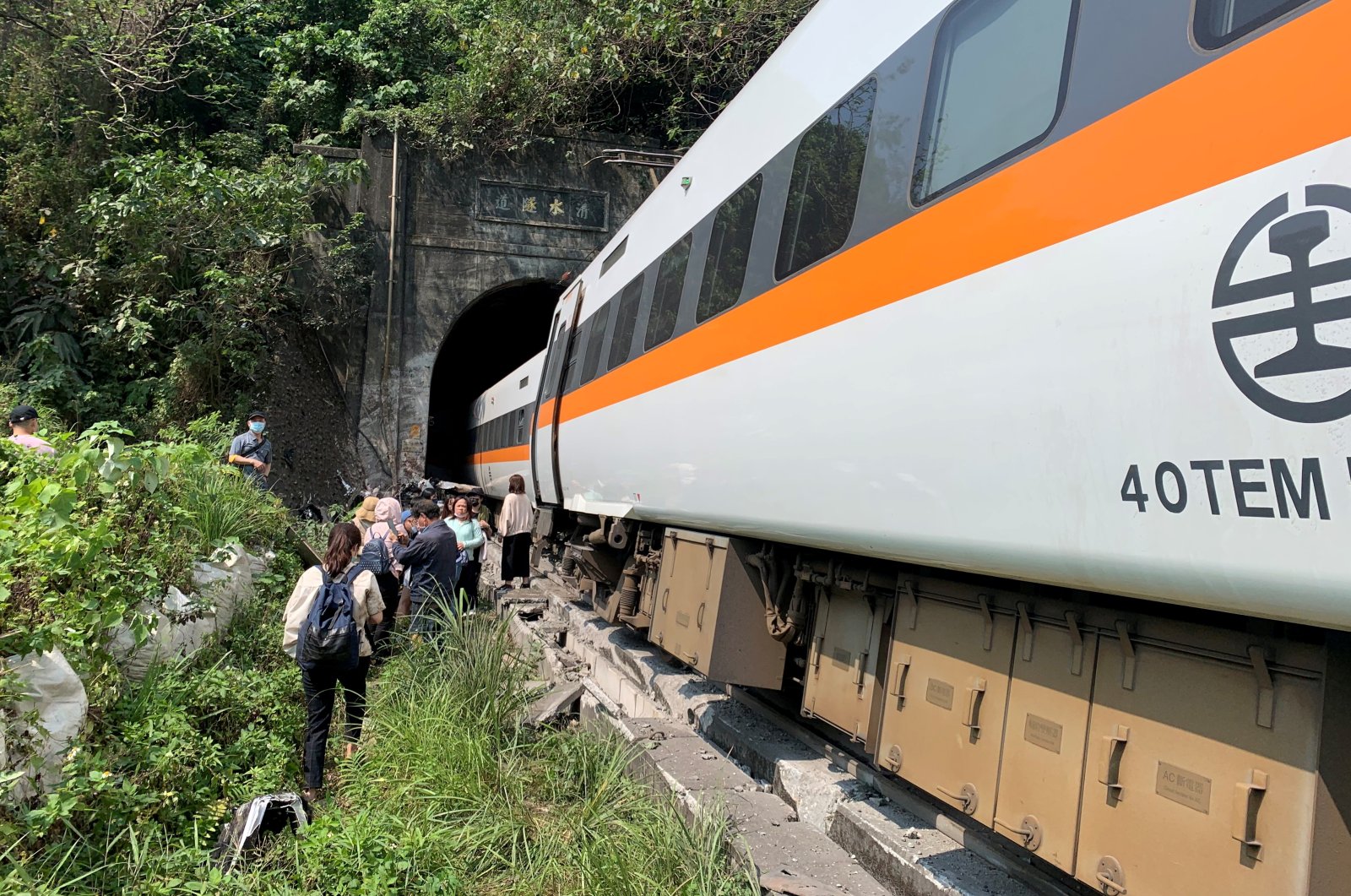 People walk next to a train which derailed in a tunnel north of Hualien, Taiwan, April 2, 2021, (Taiwan's National Fire Agency via Reuters)
by ASSOCIATED PRESS
Apr 02, 2021 8:35 am

A passenger train smashed into a truck on its tracks and partially derailed outside a rail tunnel along Taiwan’s east coast Friday, killing 51 people and injuring dozens, local police said. Survivors were climbing out windows and onto roofs to reach safety.

The train derailed near the Taroko Gorge scenic area on the first day of a long holiday weekend when many people were using Taiwan's extensive rail system. The train had been carrying more than 400 people.

Images from the scene showed train cars wedged against the walls of the tunnel; part of the wall of one car had smashed into a seat. "Many people were crushed under train seats in the collision. And there were other people on top of the seats. So those at the bottom were pressed and crushed and lost consciousness," a passenger with gauze taped to her elbow told Taiwanese broadcaster EBC, which did not show her face or give her name.

"At the beginning, they still responded when we called them. But I guess they lost consciousness afterward.”

The National Fire Service confirmed the death toll, which included the train's young, newly married driver, and said all aboard had now been accounted for. More than 100 people were injured, it said. Railways news officer Weng Hui-ping called the crash Taiwan's deadliest rail disaster.

Weng said a construction truck operated by the railway administration slid onto the track from a work site on the hillside above. No one was in the truck at the time. He said the speed of the train was not known.

The train had only partially emerged from a tunnel, and with much of it still inside, many escaping passengers were forced to scramble out of doors and windows and scale the sides of the train to walk along the roof to safety.

The stretch of track where the orange-striped train came to a halt hugs the coastline. Yellow and red police tape marked the area of the crash, where tents had been set up and dozens of rescuers and officials had converged.

Taiwan is a mountainous island, and most of its 24 million people live in the flatlands along the northern and western coasts that are home to most of the island’s farmland, biggest cities and high-tech industries.

The lightly populated east is popular with tourists, many of whom travel there by train to avoid mountain roads. An investigation has been launched into the crash, and there was no immediate word about any arrests.

In a tweet, Taiwanese President Tsai Ing-wen said emergency services "have been fully mobilized to rescue & assist the passengers & railway staff affected. We will continue to do everything we can to ensure their safety in the wake of this heartbreaking incident."

The crash came on the first day of the four-day Tomb Sweeping Festival, an annual religious holiday when people travel to their hometowns for family gatherings and to pay their respects at the graves of their ancestors.

Taiwanese Premier Su Tseng-chang said the Railways Administration would be required to immediately conduct checks along other track lines to "prevent this from happening again.”

About 50 volunteers from the Tzu Chi Buddhist Foundation stationed at an aid tent near the crash site said children were among the dozens who escaped the train cars. They were treating minor wounds and offering lunches.

"We see people coming off the train and they look shaken and nervous,” said Chen Tzu-chong, a Tzu Chi team leader on site.

Taiwan's last major rail crash was in October 2018, when an express train derailed while rounding a tight corner on the northeast coast, killing at least 18 people and injuring nearly 200.

In 1991, a collision in western Taiwan killed 30 people and another crash a decade earlier also killed 30. Those were said to be the worst previous crashes on the rail system that dates from the late 19th century.

Taiwan's extensive rail system has undergone substantial upgrades in recent years, particularly with the addition of a high-speed line connecting the capital Taipei with west coast cities to the south. The train involved in Friday's derailment, the Taroko No. 408, is one of Taiwan's newer models.