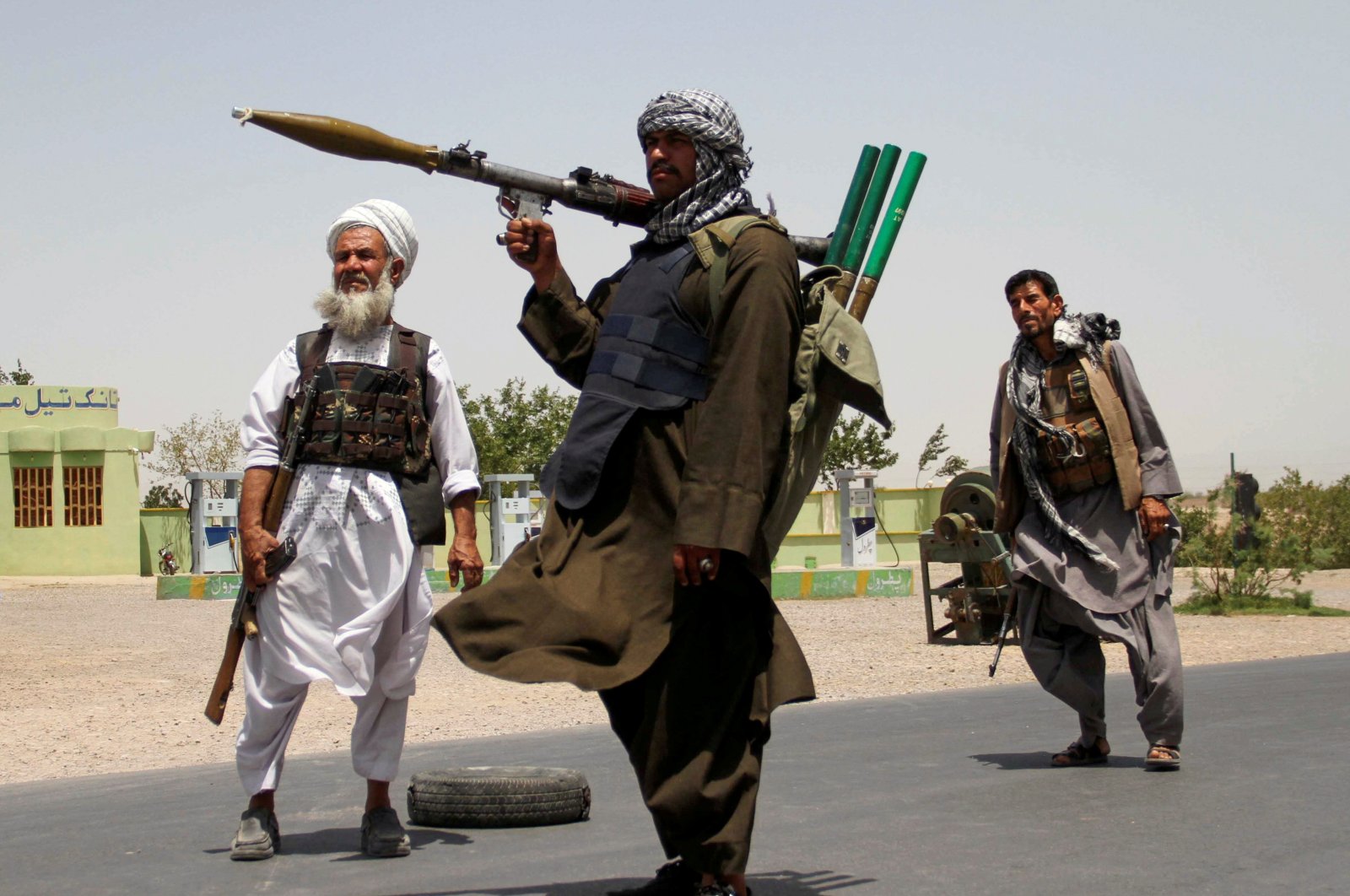 Former Mujahideen hold weapons to support Afghan forces in their fight against the Taliban on the outskirts of Herat province, Afghanistan, July 10, 2021. (Reuters Photo)
by French Press Agency - AFP Aug 02, 2021 8:59 am
RECOMMENDED

Afghan forces battled Monday to stop a major city from falling to the Taliban following weekend offensives by the insurgents on urban centers in a sharp escalation.

Hundreds of commandos were deployed to the western city of Herat while authorities in the southern city of Lashkar Gah called for more troops to rein in the assaults even as Afghan airstrikes left scores dead on the streets, residents said.

Flights out of Kandahar, Afghanistan's second-largest city and the former stronghold of the insurgents, were suspended on Sunday after two rockets hit the runway before dawn. The Taliban claimed the attack, saying government warplanes were "bombarding" their positions from the airport.

Airport chief Massoud Pashtun said flights resumed later on Sunday after the runway was repaired. The facility is vital to maintaining the logistics and air support needed to keep the Taliban from overrunning the city, while also providing aerial cover for large tracts of southern Afghanistan. The rocket barrage came as the Taliban inched closer to overwhelming at least two other provincial capitals, including nearby Lashkar Gah in Helmand province.

"Fighting is going on inside the city and we have asked for special forces to be deployed," Ataullah Afghan, head of Helmand provincial council, told Agence France-Presse (AFP).

Afghan security forces have increasingly relied on airstrikes to push the militants back from cities even as they run the risk of hitting civilians in heavily populated areas.

"Every inch of the city has been bombed," Badshah Khan, a resident of Lashkar Gah, a city of 200,000 people, told AFP by phone, adding the two warring sides were fighting "street to street" battles. "You can see dead bodies on the streets. There are bodies of people in the main square," he said, adding the Taliban had even surrounded the city's police headquarters and governor's office. Humanitarian organization Emergency said its hospital in Lashkar Gah was 90% full after receiving dozens of casualties.

"We heard bombing from the hospital throughout the night and the morning, plus small arms fire, machine guns, snipers and artillery," said Viktor Urosevic, the medical coordinator at Emergency. Further west in Herat, fighting continued on the city's outskirts overnight with airstrikes targeting Taliban positions, following another day of dramatic clashes between the insurgents and Afghan forces bolstered by local militia fighters.

Herat provincial governor's spokesman Jailani Farhad said around 100 militant fighters had been killed in the attacks, a claim difficult to independently verify. On Sunday, the Ministry of Defense said hundreds of commandos had been sent to Herat to help beat back the insurgent assault.

Clashes have intensified since early May, with the insurgents capitalizing on the final stages of the withdrawal of U.S.-led foreign forces after almost 20 years.

As the country's security forces struggled to keep the Taliban at bay, President Ashraf Ghani blamed Washington on Monday for Afghanistan's deteriorating security.

"The reason for our current situation is that the decision was taken abruptly," Ghani told parliament, referring to the withdrawal of foreign forces.

Ghani said he had warned Washington that the withdrawal would have "consequences."

His rant came as the United States said it will take in thousands more Afghan refugees as violence surged across the country.

"In light of increased levels of Taliban violence, the U.S. government is working to provide certain Afghans, including those who worked with the United States, the opportunity for refugee resettlement," the State Department said in a statement.

Washington has already started evacuating thousands of interpreters and their families who worked with the military and embassy over the past two decades.

"The threat is high in these three provinces ... but we are determined to repel their attacks," Afghan security forces spokesman Ajmal Omar Shinwari told reporters, adding it was like an "emergency situation" there.

The United Nations Assistance Mission in Afghanistan (UNAMA) demanded the Taliban "provide answers" for the rocket attack on its office in Herat Friday that killed an Afghan guard. In a tweet posted on Sunday, UNAMA indicated there were also "violent occurrences at the Herat base" on Saturday, without offering details. For months, the Taliban's rapid territorial gains during the final stages of the U.S. military withdrawal have largely been in sparsely populated rural areas. But in recent weeks they have brought increasing pressure on provincial capitals and seized key border crossings.

The capture of any major urban center would take their current offensive to another level and fuel concerns that the army is incapable of resisting the advances. The government has repeatedly dismissed the militants' steady gains over the summer as lacking strategic value but has largely failed to reverse their momentum.

The Taliban have seized Afghan cities in the past but have retained them only briefly. The U.S. military, despite being in its final stages of withdrawal, has also carried out airstrikes against the Taliban to help the Afghan forces keep the insurgents from overrunning urban areas.