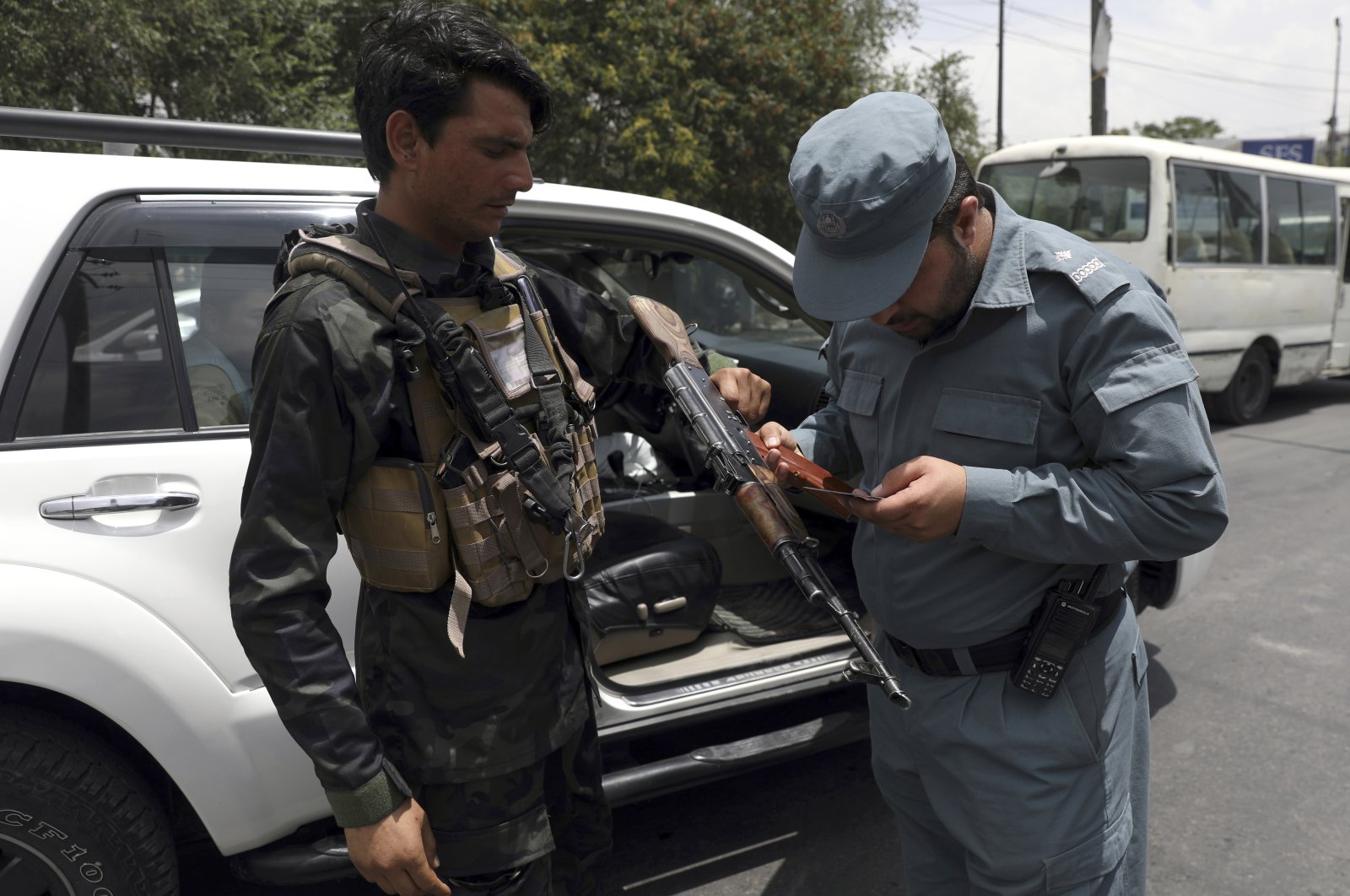 An Afghan police officer checks the documentation of a gun owner, at a temporary checkpoint in Kabul, Afghanistan, July 4, 2021. (AP Photo)
by French Press Agency - AFP Jul 06, 2021 11:09 am
RECOMMENDED

Afghan authorities on Tuesday deployed hundreds of commandos and pro-government militiamen to counter the Taliban's blistering offensive in the north, which has seen more than 1,000 government troops flee into neighboring Tajikistan.

Fighting has raged across several provinces, but the insurgents have primarily focused on a devastating campaign across the northern countryside, seizing dozens of districts in the past two months. Last week, all U.S. and NATO forces left Bagram Air Base near Kabul – the command center of anti-Taliban operations – effectively wrapping up their exit after 20 years of military involvement that began in the wake of the 9/11 attacks.

"We are planning to launch a big offensive to retake the lost territories from the enemy," Fawad Aman, a spokesperson for the Ministry of Defense told Agence France-Presse (AFP). "Our forces are being organized on the ground for this operation."

Hundreds of troops and pro-government militiamen were deployed in the northern provinces of Takhar and Badakhshan, where the Taliban have captured swathes of territory, often without any fighting.

Afghan defense officials have said they intend to focus on securing major cities, roads and border towns in the face of the Taliban onslaught, launched as U.S. and NATO troops pressed ahead with their final withdrawal in early May.

The militants' successes have spurred fears that Afghan forces are in crisis, particularly now vital U.S. air support has been massively curtailed by the handover of Bagram Air Base. A foreign security analyst said on condition of anonymity that the Taliban's attacks in the north were to "crush some of their old enemies" like the notorious warlord Abdul Rashid Dostum.

"Last year, the Taliban had attacked areas near cities like Lashkar Gah and Kandahar in the south, and they were battered by U.S. airstrikes," the analyst said. "This time, they went for the north and have achieved tremendous success.

The timing of the assault in the north has been right given the lack of U.S. airpower now."

On Monday, more than 1,000 Afghan troops fled into Tajikistan, forcing the neighboring country to boost the frontier with its own soldiers.

Several hundred had already crossed into the country in recent weeks in the face of a Taliban offensive. Tajik President Emomali Rakhmon has ordered "the mobilization of 20,000 reserve troops to further strengthen the border between Tajikistan and Afghanistan," a statement from the presidency said late Monday.

The fighting in the north has also forced Moscow to close its consulate Mazar-i-Sharif, the capital of Balkh province and one of Afghanistan's largest urban centers near the border with Uzbekistan.

"The situation is changing rapidly. The Afghan forces, as they say, have abandoned too many districts. This logically creates nervousness," Moscow's envoy to Afghanistan Zamir Kabulov told state-run Tass news agency on Monday. "Many" consulates in Mazar-i-Sharif have "temporarily suspended their activities until the situation becomes clear," he said.

Last week, the insurgents also took a key district in their former southern stronghold of Kandahar province, and on Tuesday they claimed to have captured a district in the nearby Nimroz province. The speed and ease of the Taliban's effective takeover of swathes of areas in Takhar and Badakhshan represent a massive psychological blow to the Afghan government.

Both provinces had once served as the strongholds for the anti-Taliban Northern Alliance during the gruesome civil war of the '90s and were never routed by the militants.

"Afghan forces have lost their morale," said analyst Atta Noori in Kabul. "It is an emergency situation for the Afghan government. They need to step up their counteroffensive as soon as possible."

Afghan commander General Mirassadullah Kohistani, who is now in charge of Bagram Air Base – from where U.S. warplanes bombed the Taliban hideouts for 20 years – put on a brave front when asked about the insurgents rapid gains. "We are trying to do the best and as much as possible secure and serve all the people," he said.