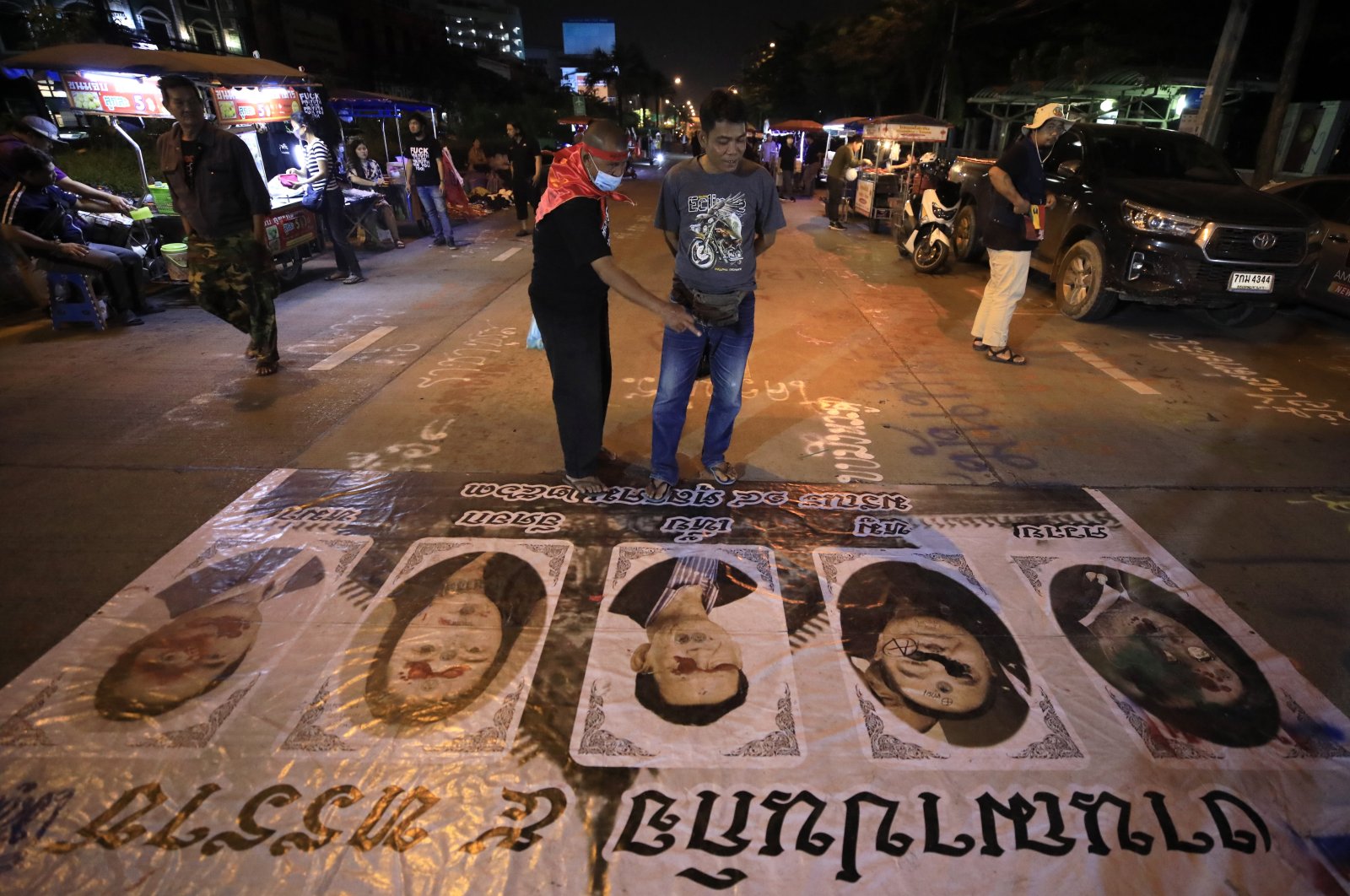 Pro-democracy protesters look on the pictures (R-L) the Prime Minister Prayut Chan-o-cha, the Deputy Prime Minister General Prawit Wongsuwan and members of the House of Representative, Paiboon Nititawan, Pareena Kraikupt and the founder of a pro-royalist group 'Thai Pakdee' (Loyal Thai) Warong Dechgitvigrom on the road ground as the block a road during an anti-government protest outside the Bangkok Remand Prison in Bangkok, Thailand, 24 Oct. 2020. (EPA Photo)
by AGENCIES Oct 24, 2020 8:00 pm
RECOMMENDED

Anti-government protesters in Thailand said on Saturday they would hold demonstrations on Sunday and Monday after Prime Minister Prayuth Chan-ocha ignored their 10 p.m. (3 p.m. GMT) deadline to resign.

Asked by journalists whether he would stand down, Prayuth simply said "won't quit" after Buddhist prayers that were held to call for national healing following months of protests that have also demanded reforms of the monarchy.

"The government is sincere in solving the problem and committed to following the law in doing so,” he told reporters.

After the 10 p.m. deadline passed, protesters called another rally for central Bangkok on Sunday, at a major intersection in the capital's main shopping district where they have gathered before.

Prayuth’s office had issued a statement earlier in the day repeating his plea to resolve differences through Parliament, which will discuss the political situation in a special session starting Monday.

"Although the ongoing political situation comprises many opposing views among different groups, we should rather take this as an opportunity for Thais to consult each other on what is best for the nation,” the statement said.

Prayuth this past week issued a call to allow Parliament to seek a solution to the crisis and in a gesture to appease the protesters, revoked a state of emergency for Bangkok he had imposed a week earlier that made protest rallies illegal.

"If all parties are committed to exercise full restraint and flexibility, the circumstances would be more conducive to deescalating the current tense political conflict and reaching an outcome that is acceptable to all stakeholders,” said Saturday’s statement, quoting government spokesperson Anucha Burapachaisri.

The protesters, however, said they would stick to their deadline for Prayuth to meet their demands that he resign and that their arrested comrades be released from jail. They have shown no enthusiasm for leaving matters in the hands of Parliament.

On Saturday morning, one of the protest leaders, Jatupat "Pai Dao Din” Boonpattararaksa, had told a crowd outside Bangkok Remand Prison that protesters should gather there and consider their next step as they waited for a response from Prayuth.

Protesters rallied outside the prison on Friday to press for their comrades’ release. They welcomed the release of Jatupat, who called for seven others still imprisoned to be freed.

In addition to calling for Prayuth's resignation, the protesters’ core demands include a more democratic constitution and reforms to the monarchy.

The protesters charge that Prayuth, who as then-army commander led a 2014 coup, was returned to power unfairly in last year’s general election because laws had been changed to favor a pro-military party. The protesters also say that a constitution written and passed under military rule is undemocratic.

The implicit criticism of the monarchy, which protesters believe wields too much power, has irked conservative Thais because it traditionally has been treated as sacrosanct and a pillar of national identity.

There is concern that the situation may become more volatile because in the past week there has been a mobilization of forces who claim to be defenders of the monarchy.

King Maha Vajiralongkorn made a rare appearance Friday night as he and Queen Suthida and other members of the royal family walked through a crowd of ardent royalists who had gathered on a street to cheer him as he passed by.

The king, in an unusually informal manner, was seen on a widely circulated video giving thanks to an onlooker who earlier in the week had held up a sign supporting the monarchy in the midst of anti-government supporters. The video showed the queen pointing out the man to the king.

Vajiralongkorn also spoke briefly with Suwit Thongprasert, a royalist activist who had been part of a group whose violent protests in 2014 put pressure on an elected government that helped trigger the coup led by Prayuth. Suwit was a Buddhist monk known as Buddha Issara when he was a leader of the right-wing People’s Democratic Reform Committee during the 2014 protests.