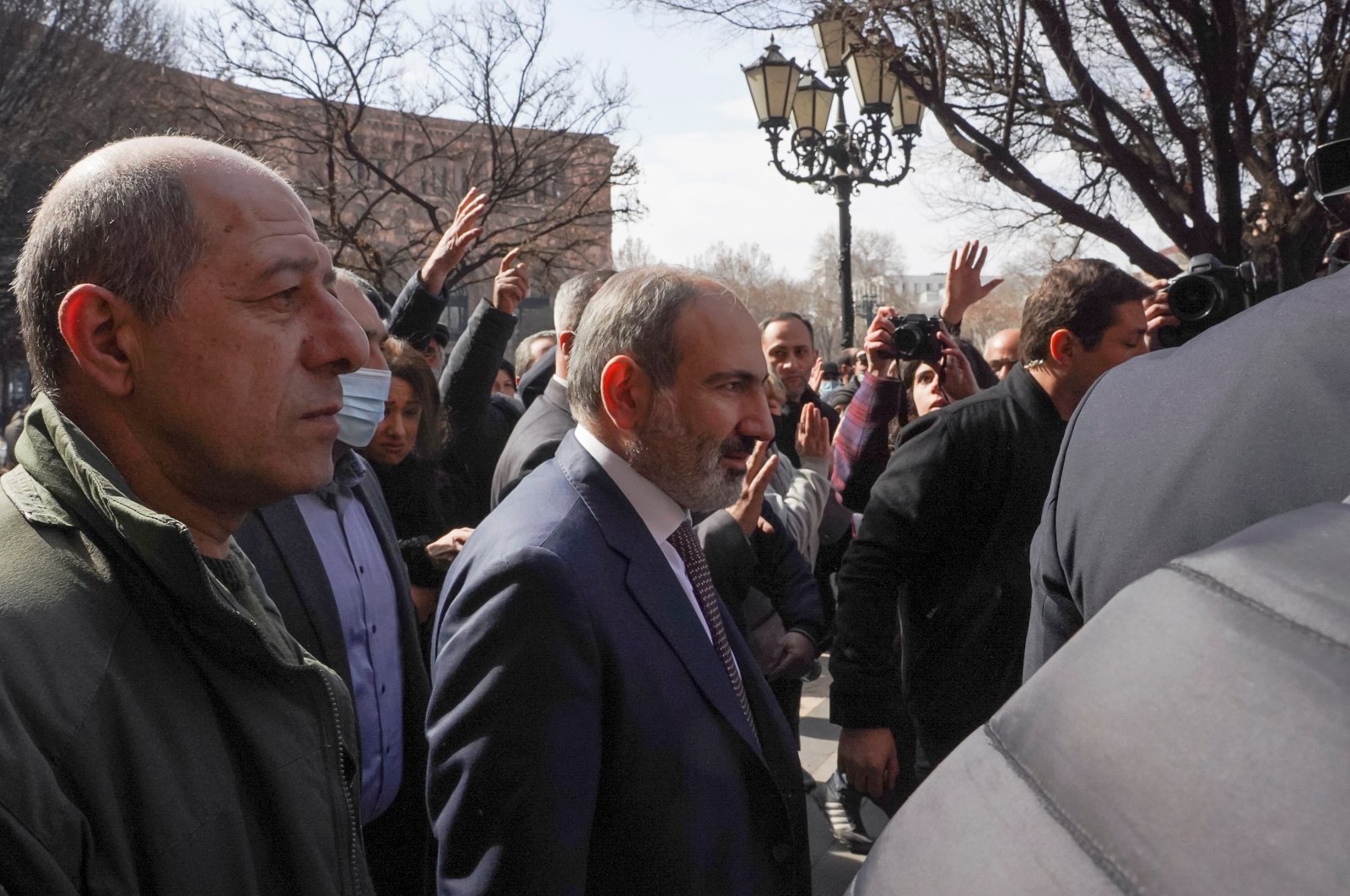 Armenian Prime Minister Nikol Pashinian meets with participants of a gathering after he called on followers to rally in the centre of Yerevan, Armenia, Feb. 25, 2021. (Reuters Photo)
by DAILY SABAH WITH AGENCIES Feb 25, 2021 11:10 am
RECOMMENDED

Pashinian called the military's statement a "military coup attempt” and ordered the firing of the chief of the General Staff. He urged the military to only listen to his orders and called on his supporters to take to the streets and back him.

The country’s prime minister called the reaction of the military, who demanded his resignation, emotional, adding that even the dismissed military leaders remain “his brothers and soldiers of the Motherland.”

“I hope you are accustomed to information terror. A variety of rumors are spread - allegedly that we have prepared an airplane and ready to escape. We are here and will not leave our homeland under any circumstances. My family is here,” Pashinian concluded.

Meanwhile, Armenia's largest opposition party Prosperous Armenia, which has called on Pashinian to step down for months, gave him an ultimatum Thursday to resign and avert civil war.

"We call on Nikol Pashinian not to lead the country towards civil war and to avoid bloodshed. Pashinian has one last chance to avoid turmoil," it said in a statement.

The developments came after Armenia saw a spike in demonstrations this week demanding the resignation of Pashinian. Throngs of opposition demonstrators swarmed the streets of the Armenian capital, chanting "Nikol, you traitor!” and "Nikol, resign!” Opposition supporters blocked the streets around Yerevan, paralyzing traffic around the capital.

In 2018, Pashinian rose to prominence as the leader of widespread demonstrations across the country against the political establishment, demanding an end to corruption and a more democratic Armenia.

He was elected prime minister by the parliament after the bloc he led received 70.4% of the vote in elections held in December 2018.

The Armenian army launched attacks on civilians and Azerbaijani forces and violated three humanitarian cease-fire agreements during the 44-day conflict.

Pashinian said he signed an "unspeakably painful" deal that allowed Azerbaijan to claim control over regions it took back in the fighting.

Heavy fighting that erupted in late September marked the biggest escalation of the decades-old conflict between Armenia and Azerbaijan, killing more than 6,000 people on both sides. Despite the simmering public anger over the military defeat, Pashinian has made moves to shore up his position and the protests died down as the winter cold set in.

But the demonstrations resumed with new vigor this week, and the spat between Pashinian and the top military commanders has weakened his position.

"We are watching with concern the development of the situation in Armenia. We consider it exclusively an internal affair of Armenia - our very important and close ally in the Caucasus," Kremlin spokesperson Dmitry Peskov told reporters on Thursday. "Naturally we call for calm," he added.

Meanwhile, Turkey's Foreign Minister Mevlüt Çavuşoğlu stated that as a country that "opposes any types of coups no matter what, Turkey condemns the coup attempt in Armenia."