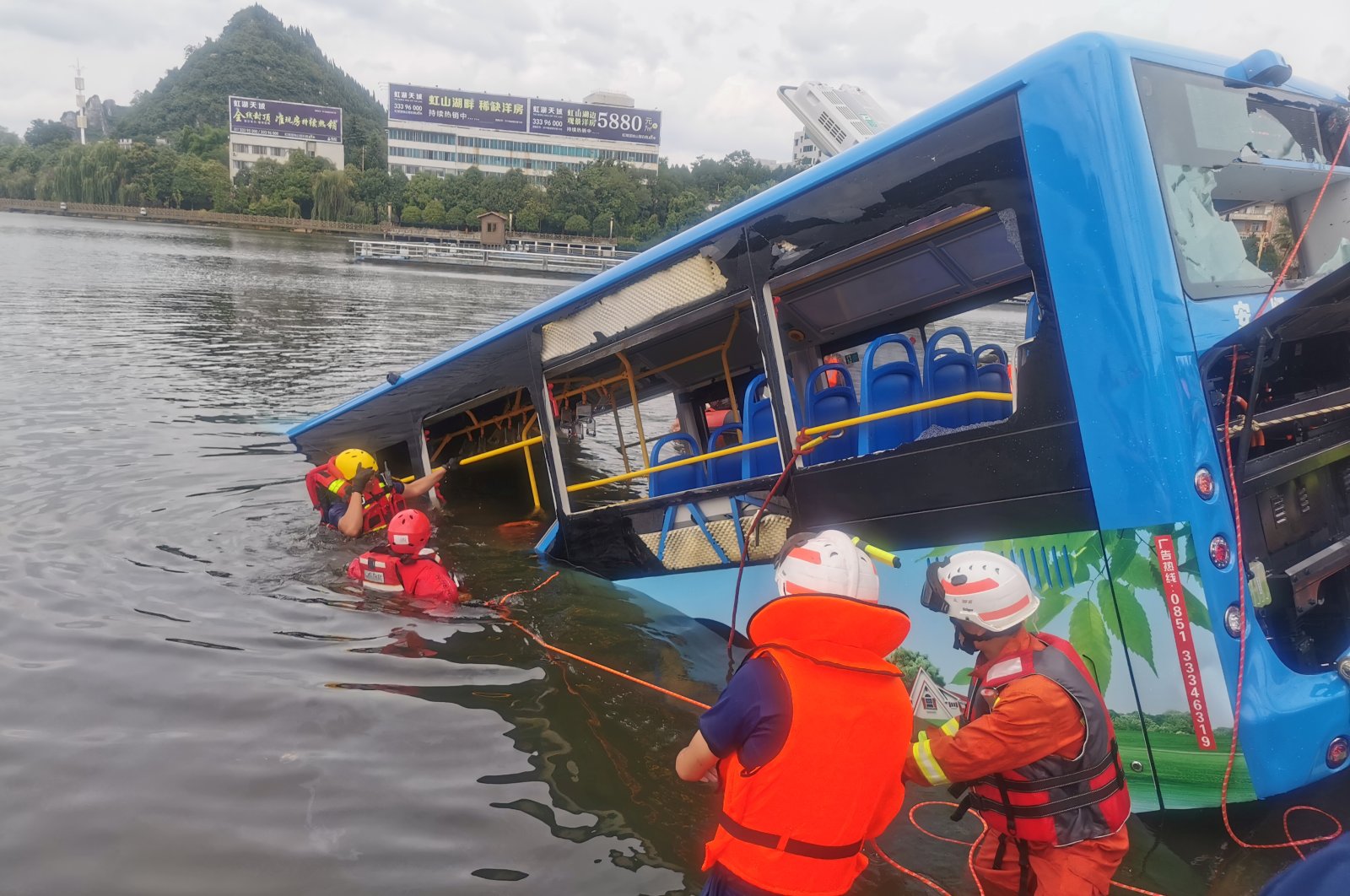 Rescue workers are seen at the site where a bus carrying students plunged into a reservoir, in Anshun, Guizhou province, China, July 7, 2020. (China Daily Photo via Reuters)
by Agencies Jul 07, 2020 1:29 pm
RECOMMENDED

At least 21 people were killed when a bus carrying students to their annual college entrance exam plunged into a lake in southwest China on Tuesday, authorities and state media said.

The bus crashed into a guardrail and veered into Hongshan Lake in Guizhou province, leaving 15 others injured, the local emergency management department said in a statement.

The incident took place around noon in Anshun city and eyewitnesses said the bus' passengers included students who were on their way to sit their gruelling "gaokao" examinations, state broadcaster CCTV reported.

Security camera footage shared on social media by CCTV showed the vehicle veering across at least five lanes cutting into oncoming traffic to plough through barriers on the other side of the road.

All those injured in the crash are being treated in the hospital. Local authorities pledged an investigation into the cause of the accident.

Separately from the incident, severe flooding and heavy rains have killed at least two people and disrupted the first day of widely anticipated college entrance exams being held one month late because of the coronavirus outbreak.

The Chinese language exam in She county in southern Anhui province was canceled after only 500 of the 2,000 students had reached the exam site by 10 a.m. Tuesday, the Huangshan city government said.

More than 10 million students were slated to take the exams nationwide in what was described as the country's largest collective event since COVID-19 restrictions were put in place in January.

Anhui and neighboring Hubei province, the epicenter of the pandemic in China, appeared to be the hardest hit by the rain.

Nearly 30,000 people were evacuated in Hubei's Huanggang city after water started seeping from a reservoir, the China News Service reported. The reservoir has been reinforced and a channel dug to release floodwater.

Two people died in Hubei and nearly 1 million have been affected in the province by the flooding, the state-owned news service said.

Anhui raised its emergency flood response to the second-highest level, calling the situation grave as water rose above warning levels at 19 rivers, five lakes and more than 400 reservoirs.

More than 120 people have died or are missing in seasonal flooding that hits southern China every year. The bodies of four people who died in a recent landslide in Sichuan province have been found, China National Radio said Tuesday.