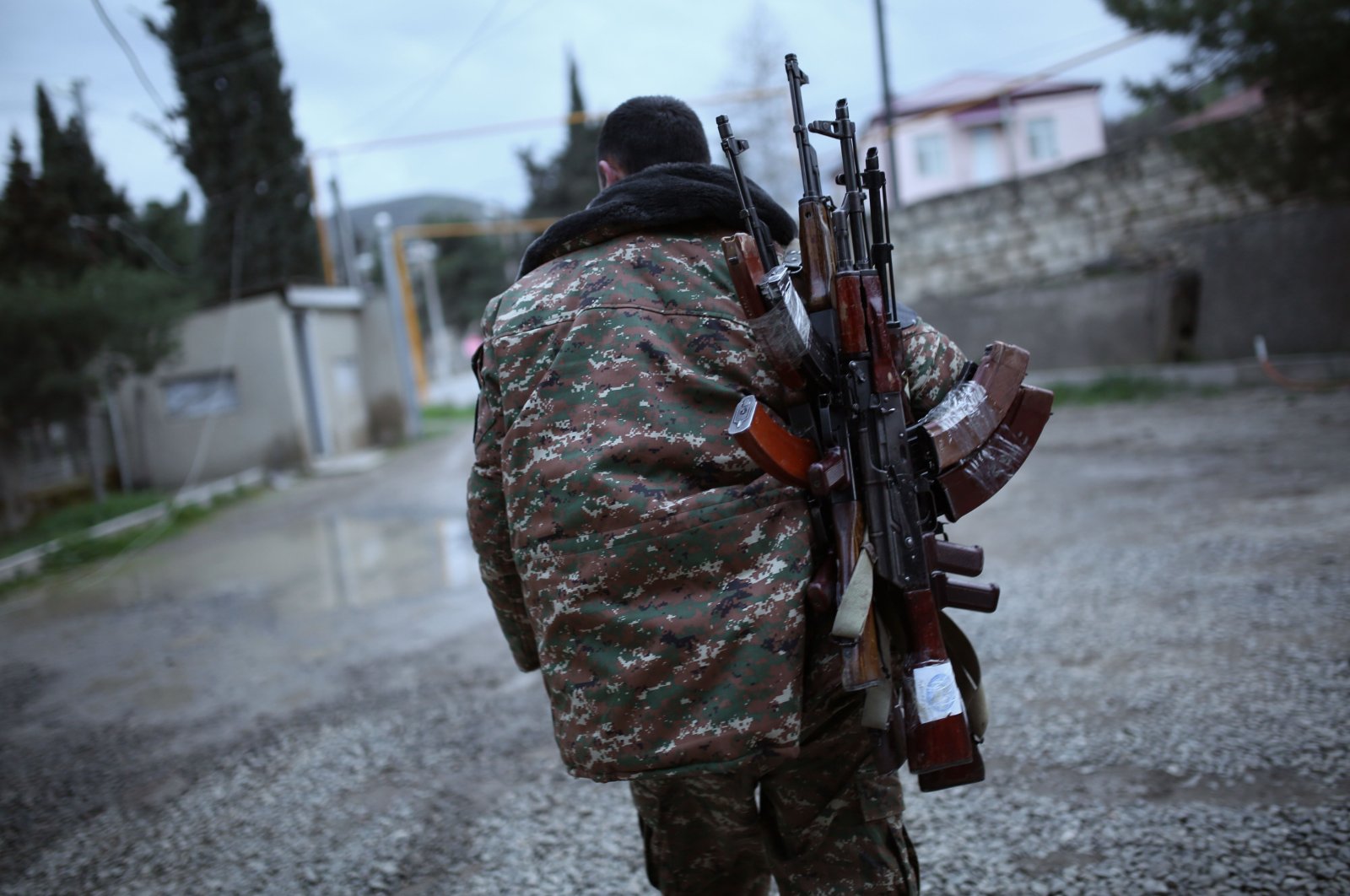 In this file photo taken on April 4, 2016, a soldier of the self-defence army of Nagorno-Karabakh carries weapons in the Martakert region. (AFP Photo)
by Daily Sabah with Wires Jul 13, 2020 12:34 pm
RECOMMENDED

Azerbaijan’s ministry of defense says Armenian positions were destroyed by the Azerbaijani troops in the Tovuz region on the Azerbaijan-Armenia border on Monday morning after three Azerbaijani soldiers were killed and four were wounded in Sunday clashes.

In a statement, Azerbaijan’s Defense Ministry said that the cease-fire violations of the Armenian soldiers continued until the morning.

According to Baku, Azerbaijani forces with the help of artillery and tanks destroyed a strong point, artillery installations and automotive equipment and killed multiple soldiers in the Armenian military's territory.

One Azerbaijani soldier has been killed during the clashes, the ministry said.

Armenian Prime Minister Nikol Pashinian accused Azerbaijan of provoking the clashes and warned that it would "bear responsibility for the unpredictable consequences."

His Defense Minister David Tonoyan warned that Yerevan "will be reacting to Azerbaijani actions, including by taking advantageous positions" in their territory.

Armenia's Foreign Minister Zohrab Mnatsakanyan discussed the crisis over the phone with the head of the Collective Security Treaty Organization (CSTO), a Moscow-led military bloc.

Azerbaijani President Ilhan Aliyev denounced what he described as "another provocation of Armenia” and vowed to protect Azerbaijan's national territory.

Referring to the military alliance, Aliyev's office said on Sunday that Armenia's "military adventure" was aimed at drawing CSTO into the fighting.

Turkey's Foreign Ministry called on Armenia to come to its senses and stop attacking Azerbaijan.

"Turkey will continue, with all its capacity, to stand by Azerbaijan in its struggle to protect its territorial integrity," the ministry said.

In Moscow, the Russian Foreign Ministry has expressed "serious concern” about the outbreak of fighting and warned against further escalation that could undermine regional security.

Former Soviet republics Armenia and Azerbaijan have for decades been locked in a simmering conflict over Nagorno-Karabakh, a breakaway territory that was at the center of a bloody war in the 1990s.

The ongoing clashes are far from Karabakh and are directly between the two Caucasus states, which rarely happens.