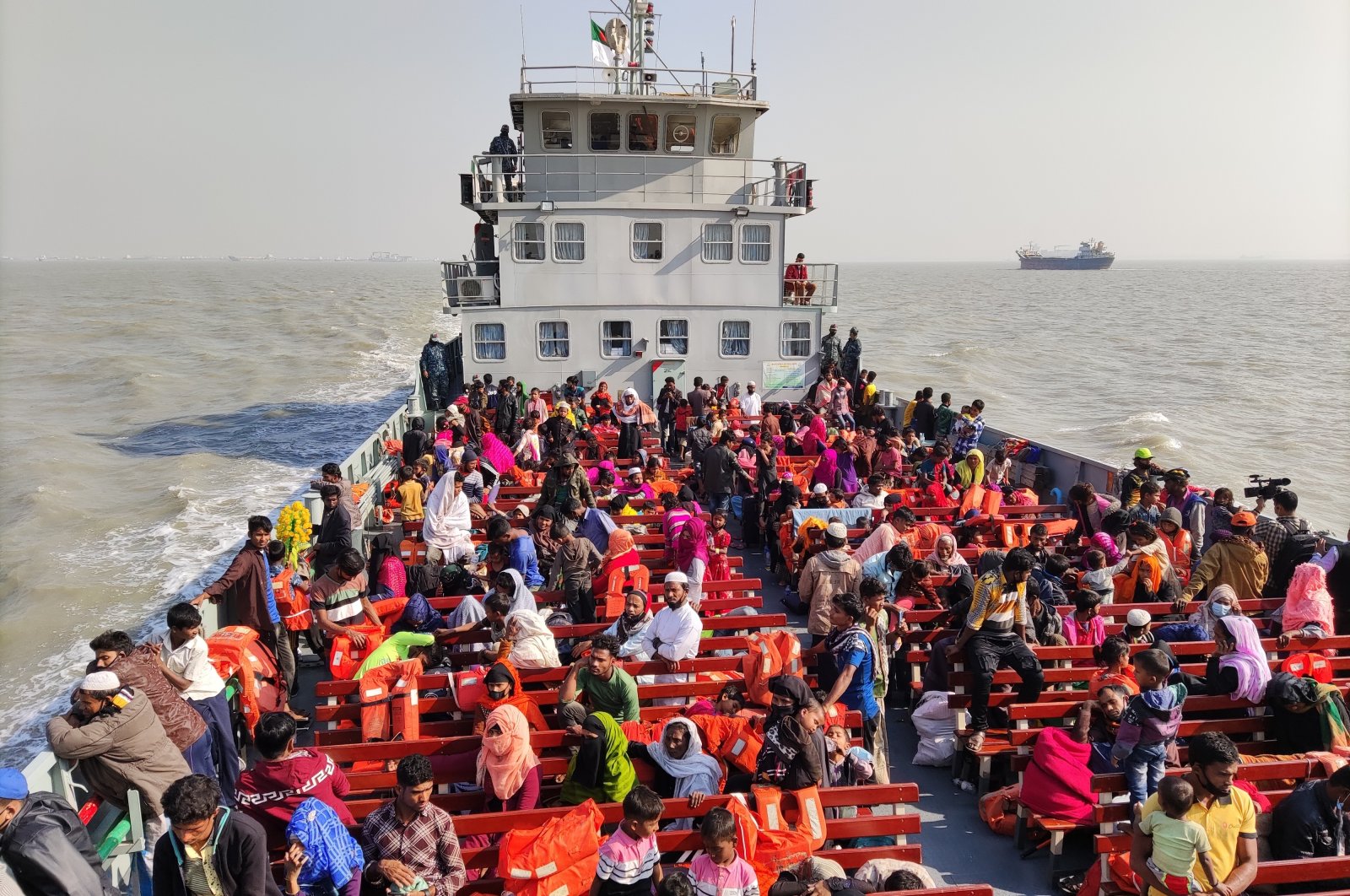 Rohingya refugees travel in a naval ship to be transported to an isolated island in the Bay of Bengal, in Chittagong, Bangladesh, Tuesday, Dec. 29, 2020. (AP Photo)
by DAILY SABAH WITH AGENCIES Dec 29, 2020 11:39 am
RECOMMENDED

Five Bangladesh Navy ships carrying more than 1,700 Rohingya refugees left the southeastern port city of Chattogram on Tuesday for an isolated island, where they will be relocated despite concerns among human rights groups about their safety.

The refugees were expected to reach the Bhashan Char island after a three-hour journey, a government official involved with the process said.

The official, who spoke on condition of anonymity because he was not authorized to talk to the media, said the refugees were taken to Chattogram from their camps in Cox's Bazar by buses on Monday and stayed overnight in a temporary camp.

Authorities insist the refugees were selected for relocation based on their willingness and that no pressure was applied on them. But several human rights and activist groups say some were forced to go to the island, located 21 miles (34 kilometers) from the mainland, according to The Associated Press (AP).

The island surfaced only 20 years ago and was not previously inhabited. It was regularly submerged by monsoon rains but now has flood protection embankments, houses, hospitals and mosques built at a cost of more than $112 million by the Bangladesh Navy. The island's facilities are designed to accommodate 100,000 people, just a fraction of the million Rohingya Muslims who fled waves of violent persecution in their native Myanmar and are currently living in crowded, squalid refugee camps in Cox's Bazar district where as many as a dozen people sharing one shelter and scarce access to soap and water in some areas.

The Rohingya carried bags of belongings, toys and chickens as they sat on wooden benches during the three-hour trip from Chittagong to Bhashan Char. Housing blocks have been set up for the new arrivals on the island that Foreign Minister Abdul Momen has called a "beautiful resort."

"They are very eager to go to Bhashan Char because they have heard from their relatives, those who have gone to Bhashan Char, that it is an excellent place," Momen told Agence France-Presse (AFP).

Authorities sent the first group of 1,642 Rohingya to the island on Dec. 4, despite calls for a halt by human rights groups. International aid agencies and the U.N. have opposed the relocation since it was first proposed in 2015, expressing fear that a big storm could overwhelm the island and endanger thousands of lives.

The United Nations also voiced concern that refugees be allowed to make a "free and informed decision” about whether to relocate. Amnesty International and Human Rights Watch have urged the government to cancel the plan. An influential Cabinet minister and general secretary of the governing party, Obaidul Quader, said Monday that the Rohingya are being moved to the island because their repatriation to Myanmar has been delayed. He said refugees who were earlier taken to Bhashan Char have expressed satisfaction.

"A lack of transparency in the consultation process with refugees and allegations from within the community about cash incentives being offered to Rohingya families to relocate to Bhashan Char as well as the use of intimidation tactics are making the relocation process questionable," Amnesty International said, while Bangladeshi foreign ministry asserting that the "Rohingya people who have shifted there are very happy with the arrangement" and "some evil groups are spreading negative propaganda."

About 700,000 Rohingya Muslims, mostly women and children, fled from Buddhist-majority Myanmar to Bangladesh after August 2017, when Myanmar's military began a harsh crackdown on the minority group following an attack by insurgents. Security forces have been accused of mass rapes, killings and burning of thousands of homes.

Bangladesh has attempted to start sending refugees back to Myanmar under a bilateral agreement, but no one was willing to go. The Rohingya are not recognized as citizens in Myanmar, rendering them stateless and face other state-sanctioned discrimination.