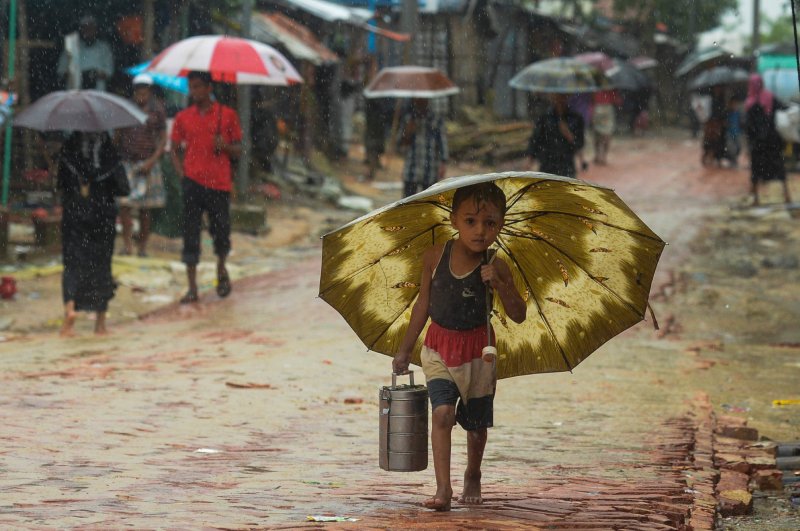 A Rohingya refugee boy shelters under an umbrella as he makes his way during a monsoon rainfall at Kutupalong refugee camp, Ukhia, Sept.12, 2019. (AFP Photo)
by French Press Agency - AFP Feb 26, 2020 12:36 pm

Bangladesh has yet again shelved a controversial plan to relocate some 100,000 Rohingya refugees to a flood-prone island in the Bay of Bengal, a minister said Wednesday.

Authorities have long sought to relocate some of the country's million-plus Rohingya population to Bhashan Char, despite warnings the silty strip of land was prone to violent and potentially deadly monsoon storms.

The move would take some pressure off the overcrowded border camps home to huge numbers of the persecuted and stateless Muslim minority, most of whom fled neighboring Myanmar in 2017 after a brutal military crackdown. But rights groups say that some refugees had been coerced into agreeing to relocation, and the plan has been staunchly opposed by the Rohingya community at large.

Junior disaster management minister Enamur Rahman said Bangladesh would increase its focus on diplomatic talks aimed at returning the refugees home. "The relocation plan has been postponed," he told AFP, adding that there had been "much progress" in repatriation discussions with Myanmar with China acting as an intermediary.

Bangladesh and Myanmar have already signed a repatriation deal to send back some Rohingya to their homeland, but safety fears mean very few have agreed to return. Bangladesh's navy has spent years building homes, facilities and floodwalls on Bhashan Char at a cost of $280 million.