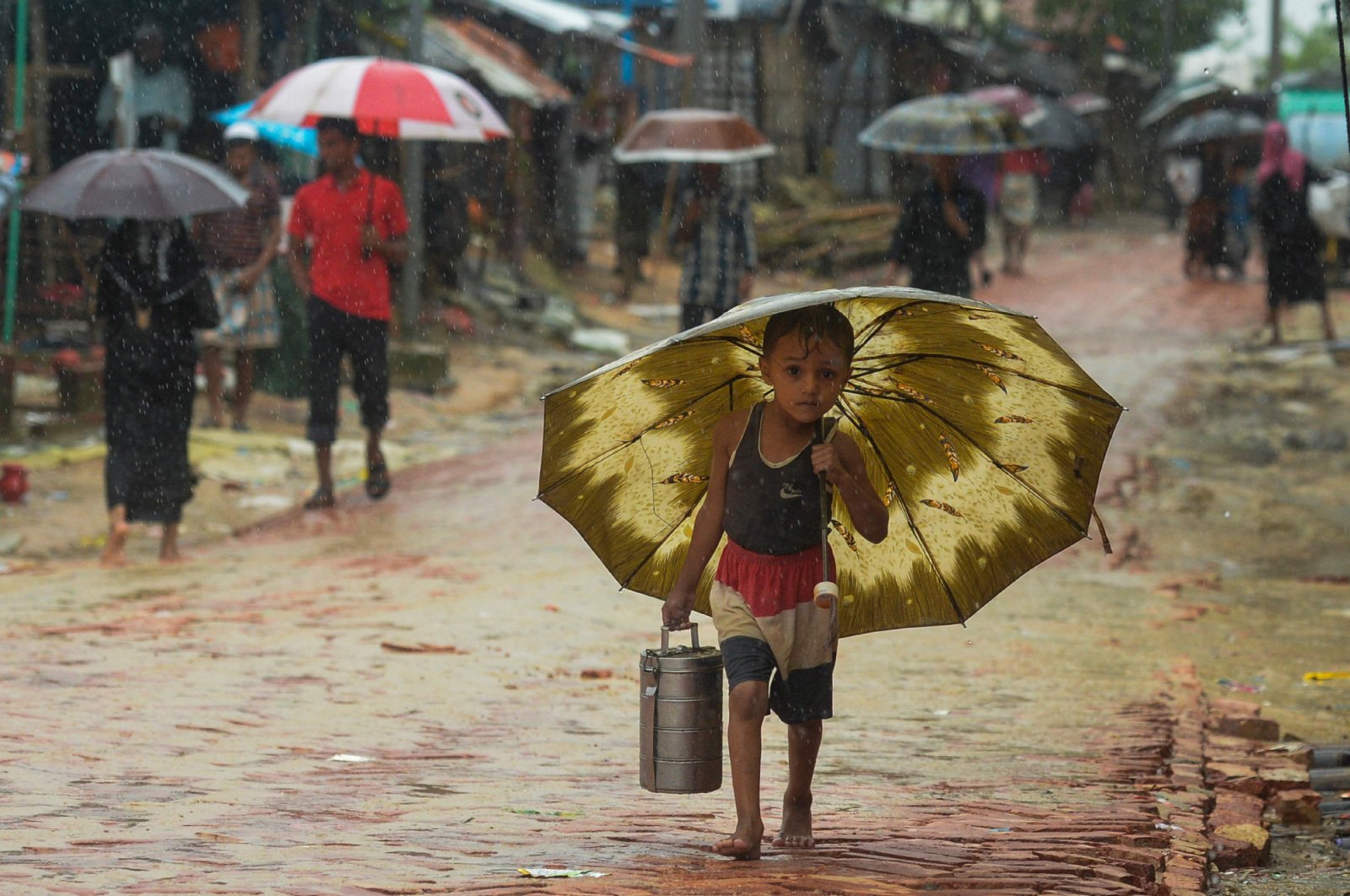 A Rohingya refugee boy shelters under an umbrella as he makes his way during a monsoon rainfall at Kutupalong refugee camp in Ukhia on Sept. 12, 2019. (AFP Photo)
by Compiled from Wire Services Jul 09, 2020 2:44 pm
RECOMMENDED

Hundreds of Rohingya refugees on a flood-prone island in the Bay of Bengal will not be allowed to leave unless they agree to return home, Bangladesh authorities said Thursday.

The 306 Rohingya Muslim from Myanmar were put on Bhashan Char island in April after being taken off two boats trying to traffic them to Malaysia.

Their plight has been taken up by the United Nations, an international rights group and community leaders, who want them moved to more established refugee camps on the mainland.

"They will stay at Bhasan Char until they are repatriated to Myanmar," Mohammed Khorshed Alam Khan, administrator for the district covering the island, told Agence France-Presse (AFP).

He said the refugees are well taken care of and have better facilities than in the overcrowded camps in Cox's Bazar where 700,000 Rohingya fled in 2017 to escape a Myanmar military clampdown.

In April, Bangladesh authorities said the Rohingya would be kept on the island in order to stop the spread of coronavirus in the sprawling refugee camps.

But Human Rights Watch (HRW) questioned that motivation and said the refugees were not being treated well.

"Bangladesh authorities are using the pandemic as an excuse to detain refugees on a spit of land in the middle of a churning monsoon sea while their families anxiously pray for their return," said Brad Adams, the organization's Asia representative.

He also asked why Bangladesh authorities were not giving aid workers access to the island settlement.

A Rohingya leader from the Cox's Bazar camps said relatives of those on the island wanted to hold talks with Bangladesh's refugee commissioner.

"We request the authorities to send our children to our families," said Mohib Ullah, head of the Arakan Rohingya Society for Peace and Human Rights, which lobbies for the Rohingya.

HRW said it had received reports that refugees on Bhashan Char had little freedom of movement or adequate access to food, safe water and medical care.

A government official involved with the case rejected the criticism but admitted some refugees wanted to be reunited with their families.

According to Amnesty International, more than 750,000 Rohingya refugees, mostly women and children, have fled Myanmar and crossed into Bangladesh after their country's forces launched a crackdown on the minority Muslim community in August 2017, pushing the number of persecuted people in Bangladesh above 1.2 million.

Since Aug. 25, 2017, nearly 24,000 Rohingya Muslims have been killed by Myanmar’s state forces, according to a report by the Ontario International Development Agency (OIDA).

Some 18,000 Rohingya women and girls were raped by Myanmar’s army and police and over 115,000 Rohingya homes were burned down with 113,000 others vandalized, it added.