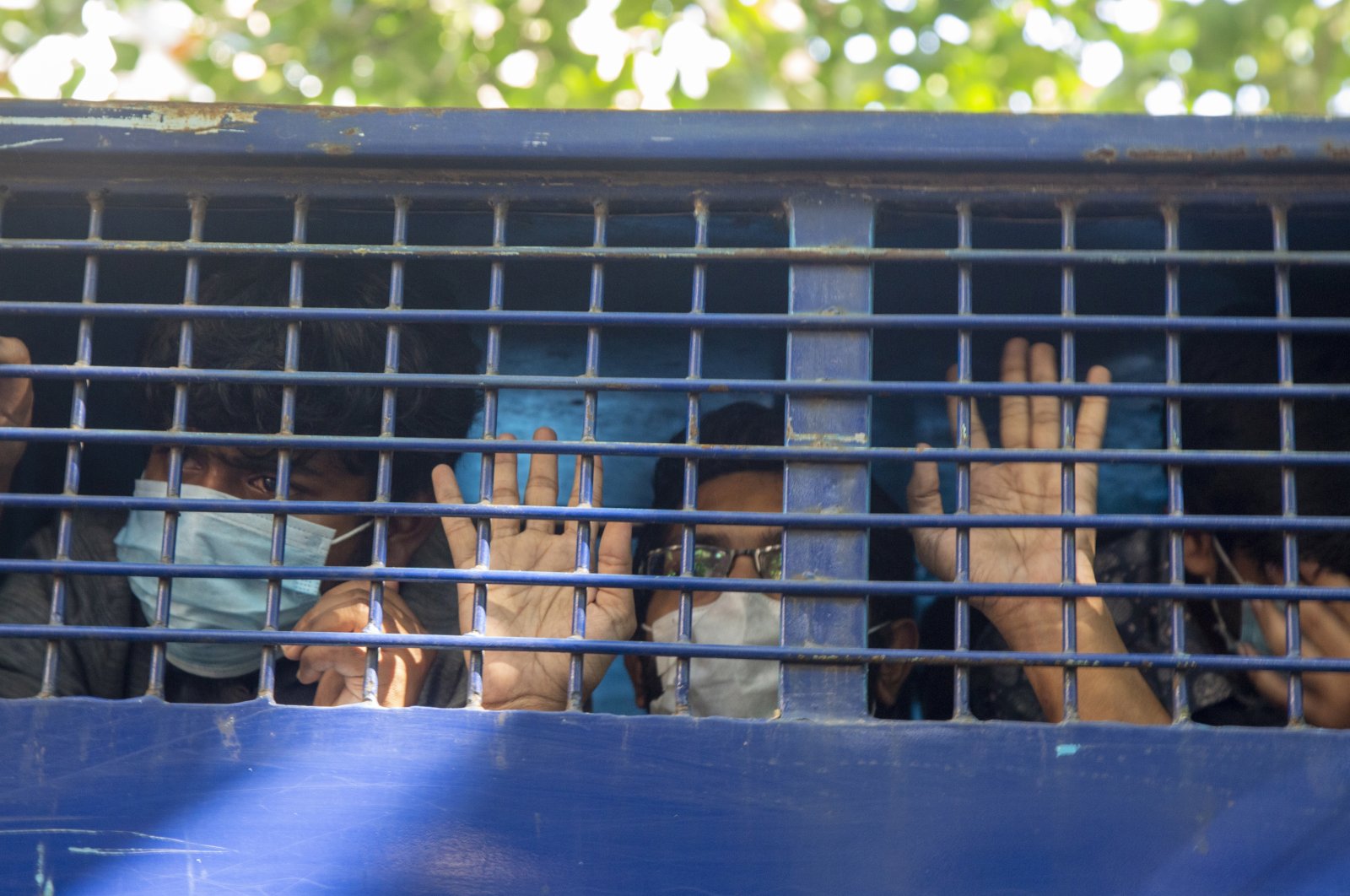 The students accused of murder try to speak to the media as they are escorted outside the court during the verdict day for the murder of student Abrar Fahad at the Speedy Trial Tribunal-1 in court, Dhaka, Bangladesh, Dec. 8, 2021. (EPA Photo)
by French Press Agency - AFP Dec 08, 2021 4:39 pm
RECOMMENDED

The battered body of Abrar Fahad, 21, was found in his dormitory hours after he wrote a Facebook post slamming Prime Minister Sheikh Hasina for signing a water-sharing deal with India.

He was beaten with a cricket bat and other blunt objects for six hours by 25 fellow students who were members of the ruling Awami League's student wing, the Bangladesh Chhatra League (BCL).

"I am happy with the verdict," Fahad's father Barkat Ullah told reporters outside court after the sentencing. "I hope the punishments will be served soon."

All those given death sentences were between 20 and 22 years old at the time of the murder and attended the elite Bangladesh University of Engineering and Technology alongside Fahad.

Three of the defendants are still at large, while the rest were in the courtroom.

Faruque Ahmed, a lawyer for some of the defendants, said the sentence would be appealed.

"I am very disappointed at the verdict. It is not fair," he told Agence France-Presse (AFP).

"They are young men and some of the best students of the country. They were sentenced to death despite no proper evidence against some of them."

In it, he criticized the government for signing an accord that allowed India to take water from a river that lies on the boundary the two countries share.

Fahad had been seen – in leaked CCTV footage that went viral on social media – walking into a dormitory with some BCL activists.

About six hours later, his body was carried out by the students and laid on the ground.

Protests in the days after Fahad's murder called for the attackers to be harshly punished and for the BCL to be banned.

Hasina vowed soon afterward that the killers would get the "highest punishment."

The country's justice minister, Anisul Huq, said the verdict showed that "nobody will be able to walk freely after committing such crimes."

Chhtra Odhikhar Parishad, a leading student group, held a demonstration to praise the verdict and demand quick execution of the death sentences.

"The verdict is the victory of the people," said Akram Hossain, the group's general secretary.

The BCL has earned notoriety in recent years after some of its members were accused of killing, violence and extortion.

In 2018, its members allegedly used violence to suppress a major anti-government student protest.

Those rallies were sparked by anger over road safety after a student was killed by a speeding bus.

Death sentences are common in Bangladesh with hundreds of people on death row. All executions are by hanging, a legacy of the British colonial era.

In August, a court sentenced six extremists to death for the murders of two gay rights activists.

Sixteen people were handed the death penalty in 2019 for burning alive a 19-year-old student who accused her seminary's headteacher of sexual harassment.