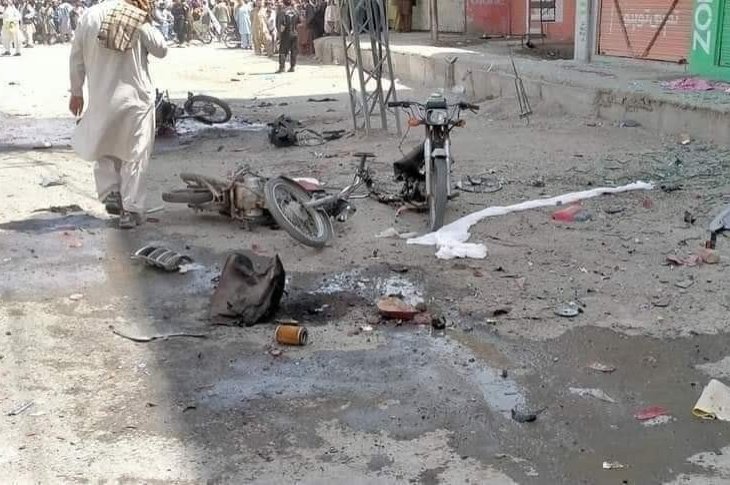 A bomb targeting an anti-drug force tore through a busy market in the southwestern Pakistani province of Balochistan near the Afghan border on Monday, killing at least five people and wounding 10 others, police and hospital officials said.

The bomb was planted in a motorcycle parked outside a construction site on Mall Road, the city's downtown, and was detonated via remote control, local broadcaster Geo News reported, quoting unnamed police officials.

The bombing targeted a unit tasked with combating narcotics smuggling. Mohammad Ali, a local police official, said some of the wounded were in critical condition.

No one immediately claimed responsibility for the explosion.

Security forces and police cordoned off the area of the blast, where residents said several shops and vehicles were damaged.

Pakistan's Prime Minister Imran Khan condemned the bombing and said he was praying for the recovery of those wounded.

Interior minister Ejaz Shah said in a statement that "such attacks are aimed at spreading fear among the people."

Mineral-rich Balochistan, bordering Afghanistan and Iran, is the largest of Pakistan's four provinces, but its roughly 7 million inhabitants have long complained they do not receive a fair share of its gas and mineral wealth.

China is investing in the area under a $54 billion project known as the China-Pakistan Economic Corridor, upgrading infrastructure, power and transport links between its far-western Xinjiang region and Pakistan's Gwadar port in Balochistan.

Thousands of paramilitary troops carry out security checks and help police in maintaining law and order in parts of Pakistan.