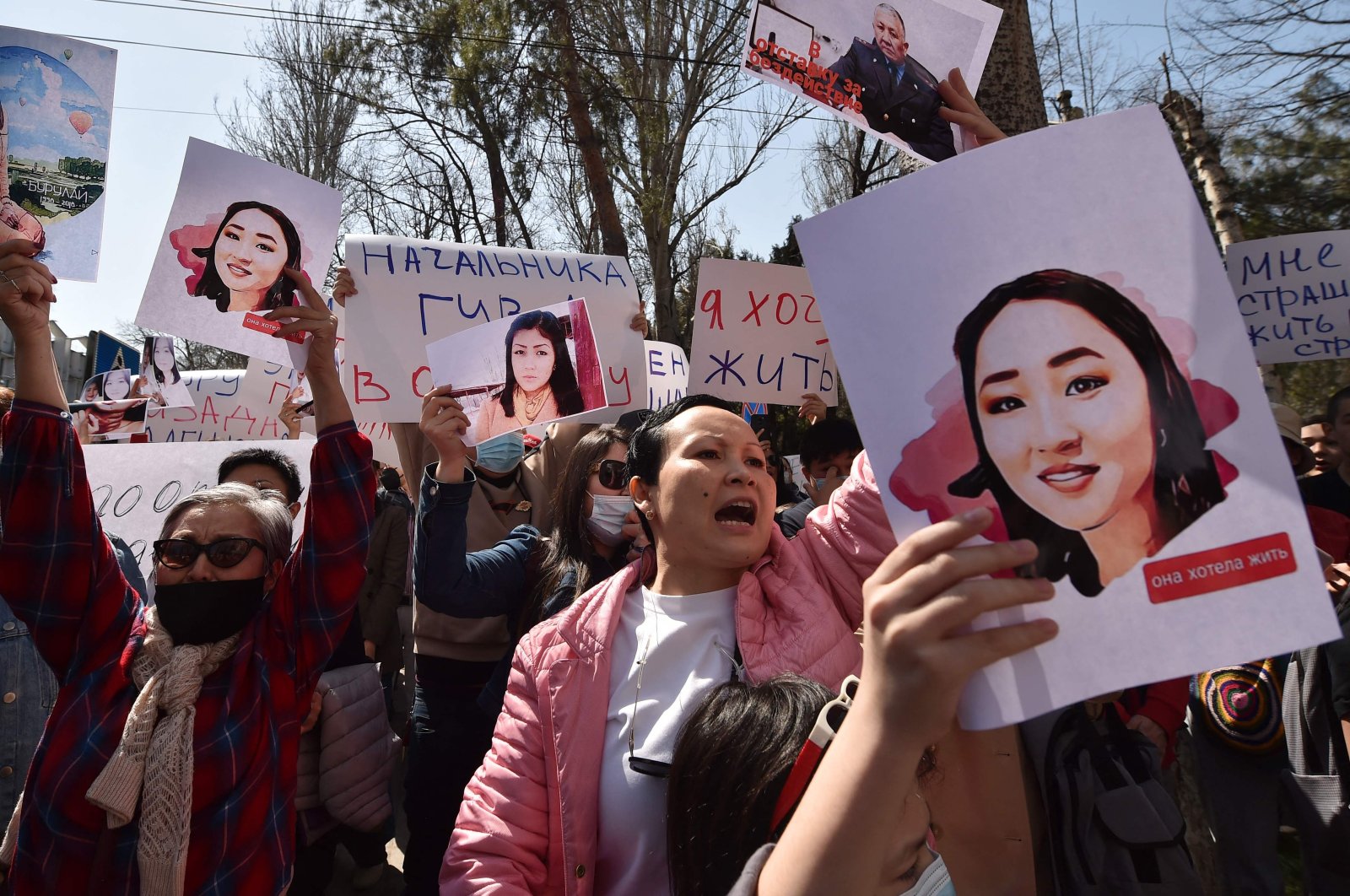 People hold pictures as they attend a rally for the protection of women's rights in Bishkek, Kyrgyzstan, on April 8, 2021. (AFP Photo)
by French Press Agency - AFP Apr 08, 2021 6:12 pm
RECOMMENDED

Hundreds of protesters gathered in front of Kyrgyzstan’s interior ministry on Thursday, demanding the resignation of police chiefs after a young woman was abducted for marriage and later found dead outside the country's capital Bishkek.

Police said Wednesday the body of 27-year-old Aizada Kanatbekova had been found two days after security camera footage widely shared on social networks showed her being bundled into a car by three men.

One of the other kidnappers was detained by police, state television reported Thursday. Bride kidnapping, known locally as Ala Kachuu, has roots in the Central Asian country's nomadic past and persisted into the Soviet era, albeit on a smaller scale.

But the practice became chronic after the country gained independence in 1991, with convictions extremely rare and survivors reluctant to file complaints due to threats of violence and cultural stigma.

Journalist Mahinur Niyazova, who tweeted a call to rally outside the interior ministry headquarters, told Agence France-Presse (AFP) that the murder showed police had other priorities rather than defending women from violence.

"It is impossible to be quiet and observe the violence that our women, who lack any rights, must endure," said Niyazova, who is the deputy editor of popular news website 24.kg.

The protesters called for the sacking of the interior minister and the city police chief and held banners bearing slogans such as "Who will answer for Aizada's murder?," "End the femicide" and "Who still thinks that murder is a tradition?"

The rally drew some 500 people and prompted Prime Minister Ulugbek Maripov to address the protesters. He asked them to "have patience" and promised that everyone associated with the kidnapping would be punished, as several demonstrators shouted him down and called for his dismissal too.

President Sadyr Zhaparov on Facebook described Kanatbekova's death as "a tragedy and pain not only for her family, but also for our entire state." He said the incident should be "the last bride kidnapping in history."

The last time a bride kidnapping death brought protesters onto the streets in Kyrgyzstan was in 2018, when 20-year-old medical student Burulai Turdaaly Kyzy was killed in a police station where officers had held her with her kidnapper as she prepared to file a statement against him.

According to the United Nations Women's office in Bishkek, one in five marriages in the impoverished republic of 6.5 million are concluded after a bride kidnapping incident.