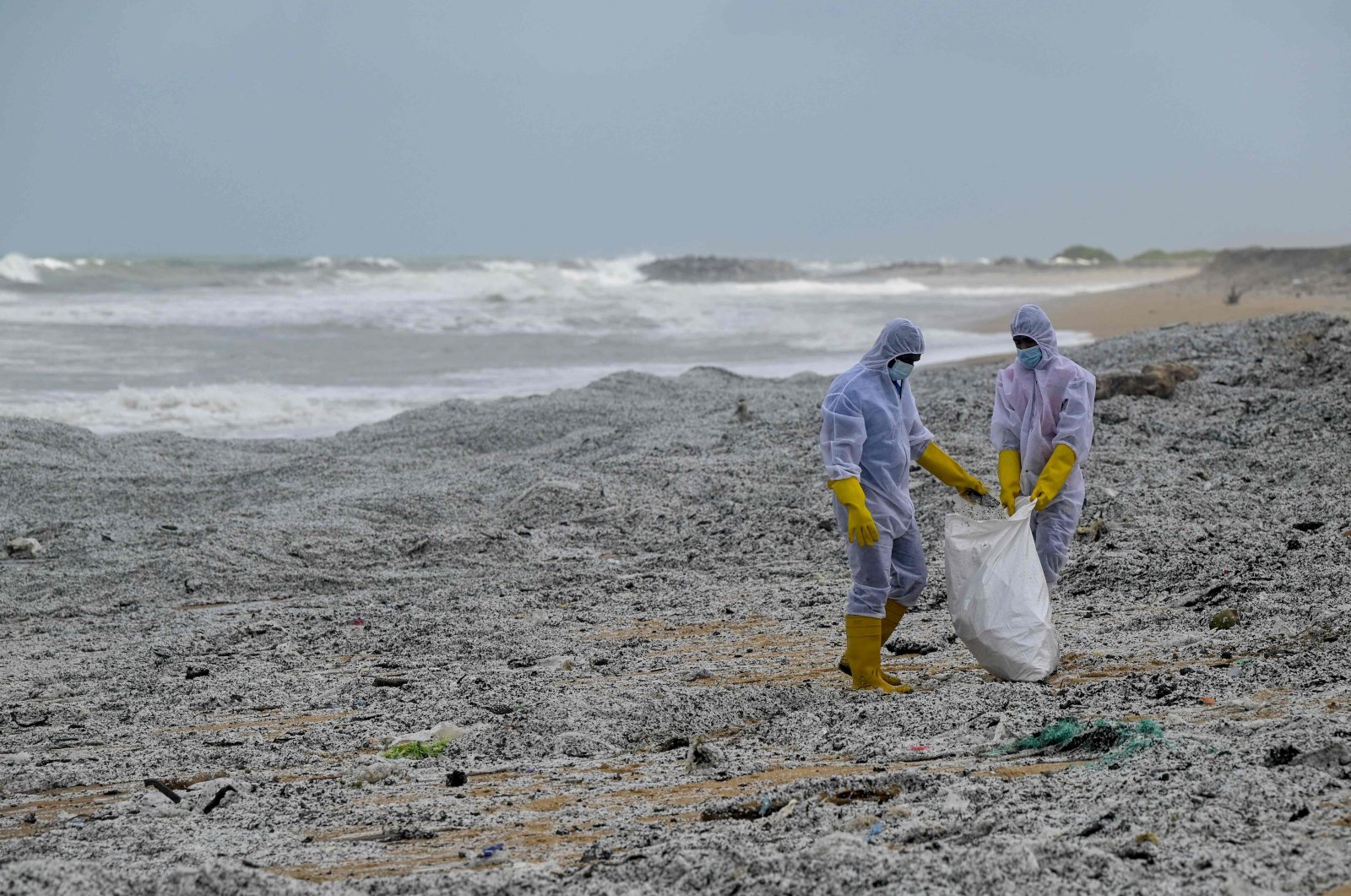 Sri Lankan Navy soldiers work to remove debris washed ashore from the Singapore-registered container ship MV X-Press Pearl, which has been burning for the ninth consecutive day in the sea off Sri Lanka's Colombo Harbor, on a beach in Colombo, May 28, 2021. (AFP Photo)
by French Press Agency - AFP May 28, 2021 9:52 am
RECOMMENDED

Plastic waste from a container ship that has been burning off the coast of Sri Lanka for days covered beaches of the island nation in an apparent outcome of a potentially bigger environmental disaster.

Tons of charred plastic pellets from Singapore-registered MV X-Press Pearl washed ashore near the capital Colombo Friday as an international effort to salvage the vessel dragged into a ninth day.

Thick black smoke rose from the container ship anchored just outside Colombo harbor, heightening fears that it could break up spilling its 278 tonnes of bunker oil.

Navy personnel in hazmat suits were sent to clean millions of plastic granules mixed with burned oil and other residue that covered Negombo beach, 40 kilometers (25 miles) north of the capital.

The plastic-covered beach, normally a draw for tourists and known as a fishing center, was declared off-limits. The smoking container ship could be seen on the horizon.

Bulldozers scooped up tons of the polythene pellets that came from at least eight containers that fell off the ship on Tuesday.

Officials said the vessel was known to carry at least 28 containers of the pellets that are used as a raw material in the packaging industry.

The fire broke out on May 20 as the ship waited to enter the Colombo port.

It is also carrying 25 tons of nitric acid, an unspecified quantity of ethanol and lubricants in its 1,500 containers.

Authorities believe the fire was caused by a nitric acid leak which the crew had been aware of since May 11, Sri Lanka's Marine Environment Protection Authority (MEPA) said.

MEPA Chairperson Dharshani Lahandapura said the crew could have avoided the disaster had they offloaded the leaking containers or returned them to the port of origin before entering Sri Lankan waters.

Lahandapura said the MEPA is bracing for an oil spill if the X-Press Pearl breaks up as monsoon winds have fanned the flames across the length of the ship.

She said the vessel was carrying 278 tons of bunker oil and 50 tons of marine gasoil when the fire erupted.

Sri Lanka navy chief Vice Adm. Nishantha Ulugetenne said Thursday it would take days to extinguish the fire, even with the weather improving.

Four Indian vessels have joined Sri Lanka's navy in the battle to contain the fire. Salvage operations are led by the Dutch company SMIT which has sent specialist fire fighting tugs.

The 25-member crew evacuated on Tuesday and two of them suffered minor injuries in the process, the owners of the vessel said on Thursday.

SMIT, a renowned salvage troubleshooter, was also involved in dousing the flames on an oil tanker that caught fire off Sri Lanka's east coast last September after an engine room explosion that killed a crewman.

The fire on the New Diamond tanker took more than a week to put out and left a 40-kilometer long oil spill. Sri Lanka has demanded the owners pay a $17 million clean-up bill.