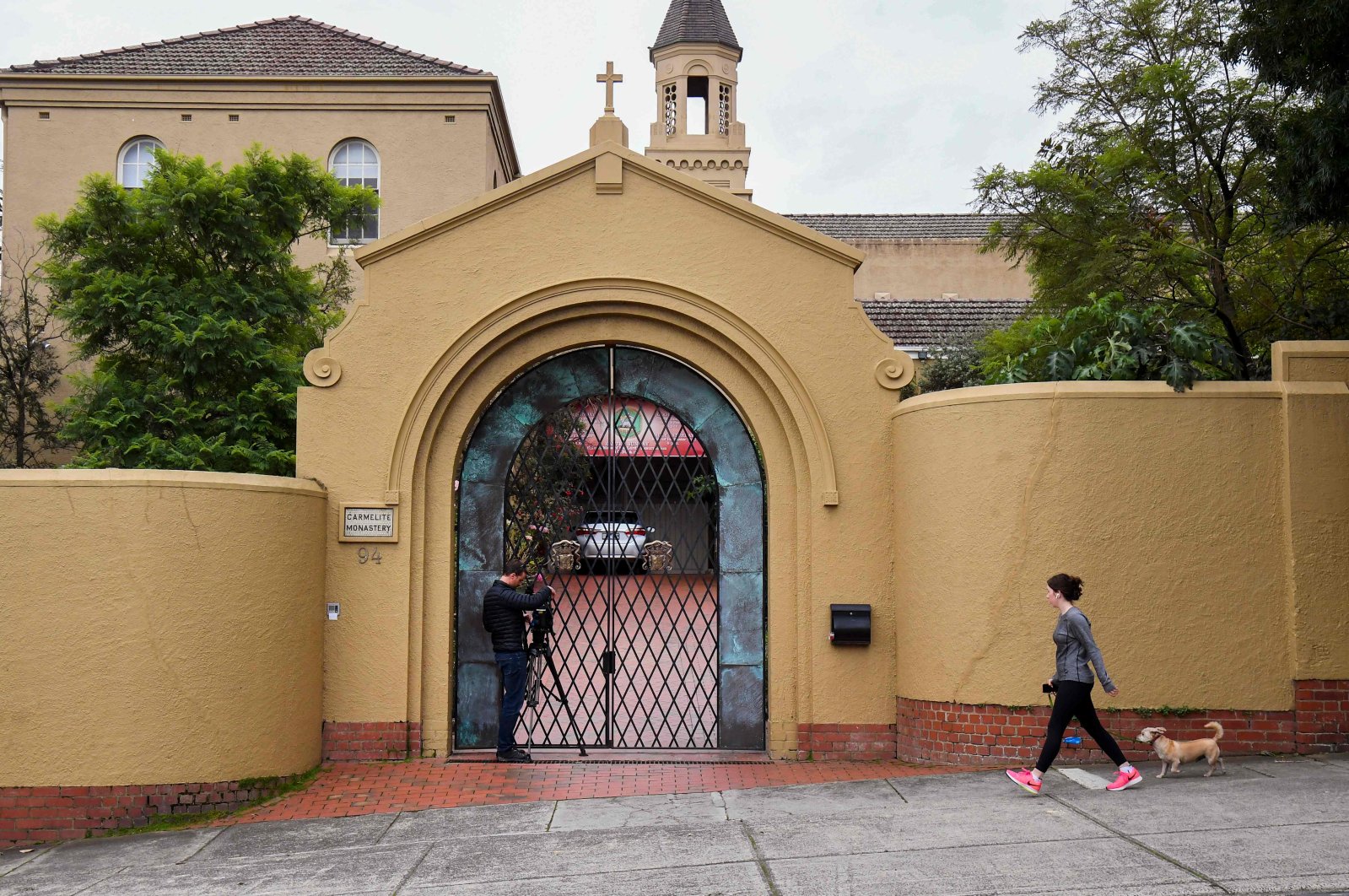 A woman walks her dog past the Carmelite Monastery in Melbourne, Australia, Tuesday, April 7, 2020, where Cardinal George Pell is staying after having been released from Barwon Prison earlier in the day. (AFP Photo)
by French Press Agency - AFP
Apr 07, 2020 10:31 am

Cardinal George Pell was released from prison Tuesday, hours after Australia's High Court quashed his conviction for child sex abuse, bringing to an abrupt end the most high-profile pedophilia case faced by the Catholic Church.

The 78-year-old left Barwon Prison near Melbourne after the court overturned five counts of sexually abusing two 13-year-old choirboys in the 1990s.

Pell, who had steadfastly maintained his innocence throughout a lengthy court process, left the jail where he has been held for the last year and issued a statement saying that a "serious injustice" had been remedied by the decision.

A jury convicted Pell in December 2018, and that decision was upheld by a three-judge panel in Victoria state's Court of Appeal last August in a split verdict.

But Australia's High Court found there was "a significant possibility that an innocent person has been convicted because the evidence did not establish guilt to the requisite standard of proof."

The seven justices unanimously found a lower court had "failed to engage with the question of whether there remained a reasonable possibility that the offending had not taken place."

Pell's legal woes, however, may not be at an end, as he faces possible civil action, including from the father of one of the alleged victims – now deceased – who is planning to launch a claim for damages.

The prosecution's case had relied heavily on the testimony of Pell's surviving accuser, who told a closed-door hearing that Pell had sexually assaulted the two boys in a Melbourne cathedral while he was archbishop of the city.

The second choirboy – who is not known to have ever spoken of the abuse – died of a drug overdose in 2014. Neither man can be identified for legal reasons.

Lisa Flynn, the lawyer for the deceased man's father, said her client was "disgusted" and "in utter disbelief" at the outcome.

"He is struggling to comprehend the decision by the High Court of Australia. He says he no longer has faith in our country's criminal justice system," she said.

"He is furious the man he believes is responsible for sexually abusing his son was convicted by a unanimous jury only to have that decision overturned today."

The Blue Knot Foundation, a victim support group, said the decision would be "crushing" for survivors of abuse.

"The child sexual abuse pandemic within the Catholic Church has threatened the safety of millions of children, the adults they become and the very moral fiber of what it means to be human," said Blue Knot president Cathy Kezelman.

"Pell now has his freedom, but many abuse victims have never been free – trapped in the horror of the crimes which decimated their lives."

In his statement, Pell thanked his lawyers, supporters and family and said he held "no ill will" toward his accuser.

"However my trial was not a referendum on the Catholic Church; nor a referendum on how Church authorities in Australia dealt with the crime of pedophilia in the Church," Pell said. "The point was whether I had committed these awful crimes, and I did not."

Local media footage showed Pell being driven from prison to a Carmelite monastery in suburban Melbourne.

Australian Prime Minister Scott Morrison said even the "discussion of these topics brings back great hurt" for victims, and his thoughts were "always with them."

"But the High Court, the highest court in the land, has made its decision and that must be respected," he said.

Coronavirus restrictions meant the verdict was delivered to a near-empty Brisbane courtroom – in stark contrast to earlier hearings that drew large crowds of his supporters and detractors, the world's media and members of the legal profession.

Pell's lawyers had argued there were "compounding improbabilities" in the case, including that Pell would not have had the time or opportunity to molest the boys in the sacristy after Mass when he would usually be on the cathedral steps bidding farewell to members of the congregation.

Pell's trial was held under a court-ordered veil of secrecy, but at the same time was quietly removed from top Church bodies – although the Vatican resisted launching an internal investigation.

The former Vatican treasurer remains in the priesthood, but his future role in the church remains unclear.