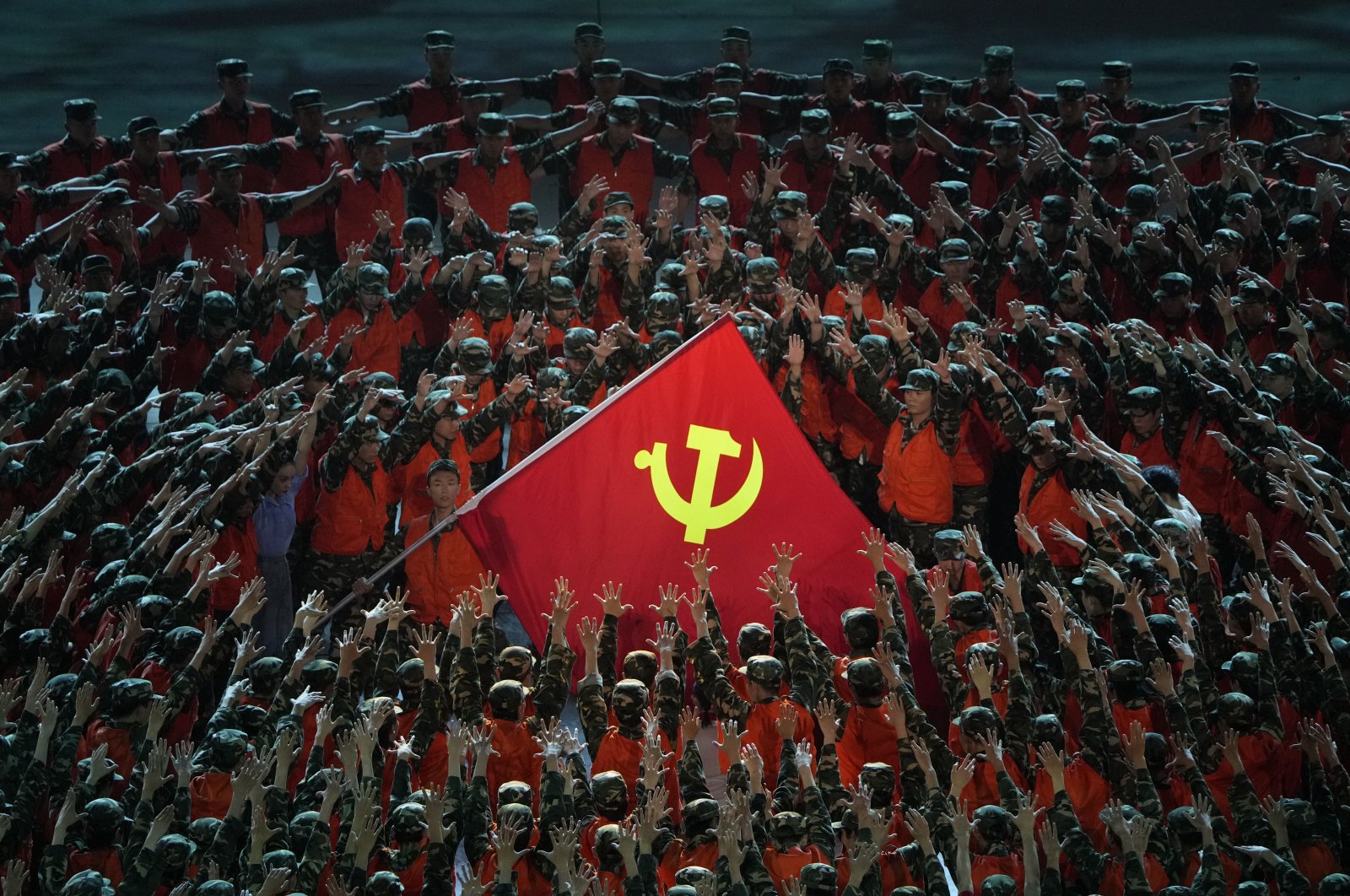 Performers in the role of rescue workers gather around a Communist Party flag during a gala show ahead of the 100th anniversary of the founding of the Chinese Communist Party in Beijing, China, June 28, 2021. (AP Photo)
by ASSOCIATED PRESS
Jul 01, 2021 9:10 am

China will not allow itself to be bullied and anyone who tries will face “broken heads and bloodshed in front of the iron Great Wall of the 1.4 billion Chinese people,” President Xi Jinping said at a mass gathering Thursday to mark the centenary of the ruling Communist Party.

Wearing a grey buttoned-up suit of the type worn by Mao Zedong, Xi spoke from the balcony of Tiananmen Gate, emphasizing the party's role in bringing China to global prominence and saying it would never be divided from the people.

Xi, who is head of the party and leader of the world's largest armed forces also said China had restored order in Hong Kong following anti-government protests in the semiautonomous city in 2019 and reiterated Beijing’s determination to bring self-governing Taiwan under its control.

He received the biggest applause, however, when he described the party as the force that had restored China's dignity and turned it into the world's second-largest economy since taking power amid civil war in 1949.

“The Chinese people are a people with a strong sense of pride and self-confidence," Xi said. “We have never bullied, oppressed or enslaved the people of another nation, not in the past, during the present or in the future."

“At the same time, the Chinese people will absolutely not allow any foreign force to bully, oppress or enslave us and anyone who attempts to do so will face broken heads and bloodshed in front of the iron Great Wall of the 1.4 billion Chinese people,” Xi said.

Xi's comments come as China is enmeshed in a deepening rivalry with the United States for global power status and has clashed with India along their disputed border. China also claims unpopulated islands held by Japan and almost the entire South China Sea, and it threatens to invade Taiwan, with which the U.S. has boosted relations and military sales.

Beijing also faces criticism that it is guilty of abusing its power at home, including detaining more than 1 million Uyghurs and other Muslim minorities for political reeducation in the northwestern region of Xinjiang, and for imprisoning or intimidating into silence those it sees as potential opponents from Tibet to Hong Kong.

Thursday’s events are the climax of weeks of ceremonies and displays praising the role of the Communist Party in bringing vast improvements in quality of life at home and restoring China’s economic, political and military influence abroad. Those improvements coupled with harshly repressing opponents have helped the party hold power despite its 92 million members accounting for just over 6% of China’s population.

While the progress dates mainly from economic reforms enacted by Deng Xiaoping four decades ago, the celebrations spotlight the role of Xi, who has established himself as China’s most powerful leader since Mao. Xi mentioned the contributions of past leaders in his address, but his claims to have attained breakthroughs in poverty alleviation and economic progress while raising China’s global profile and standing up to the West were front and center.

Xi, 68, has eliminated limits on his time in office and is expected to begin a third five-year term as party leader next year.

In seeking to capture more gains for the party on the world stage, Xi is setting up China for a protracted struggle with the U.S., said Robert Sutter of George Washington University’s Elliot School of International Affairs.

“In foreign affairs it involves growth of wealth and power, with China unencumbered as it pursues its very self-centered policy goals at the expense of others and of the prevailing world order,” Sutter said.

While the party faces no serious challenges to its rule, the legitimacy of its rule has been undercut by past disasters such as the mass famine of the Great Leap Forward in the late 1950s and early 1960s, the Cultural Revolution’s violent class warfare and xenophobia, and the 1989 bloodshed at Tiananmen Square.

The party’s official narrative glosses over past mistakes or current controversies, emphasizing development, stability and efficiency – including its success in controlling COVID-19 at home – in contrast to what it portrays as political bickering, bungling of pandemic control measures and social strife in multiparty democracies.

Xi's comments Thursday on bullying, oppression and enslavement will elicit historical memories among Chinese of the 19th century Opium Wars that led to foreign nations gaining special legal and economic privileges in China, as well as Japan's brutal invasion and occupation of much of the country during the 1930s and 1940s.

Xi said those experiences had made the party's rise to power inevitable as the only force truly able to rid China of foreign meddling and restore its global stature.

“History and the people chose the Communist Party," Xi said.

Xi said the party would retain absolute control over its military wing, the People's Liberation Army, which now has the world's second-largest annual budget after the U.S. armed forces and has been adding aircraft carriers and sophisticated new aircraft, showcased in a flyover at the start of the ceremony featuring a squadron of China's J-20 stealth fighters.

“We will turn the people's military into a world-class military, with even stronger capabilities and even more reliable means to safeguard the nation's sovereignty, security and development interests," Xi said.

Thursday's rally recalled the mass events at which Mao would greet hundreds of thousands of Red Guards in Tiananmen Square during the chaotic 1966-76 Cultural Revolution, a time many older Chinese would prefer to forget.

Yet it also portrayed a people strongly united behind the ruling party and its leader.

“After several generations of leaders, including President Xi, now (China) is advancing courageously and relentlessly on the path of socialism. So I think the Communist Party will be able to carry on for a thousand years, ten thousand years,” said Beijing resident Yang Shaocheng.

Events are being held across the country, including in Hong Kong, which is simultaneously holding commemorations of its 1997 handover from British to Chinese control.

China has cracked down hard on freedom of speech and political opposition in the territory, while rejecting all outside criticism and sanctions imposed on its leaders.

Hong Kong Chief Executive Carrie Lam was among officials seated on Tiananmen Gate, while her deputy defended the national security law imposed by Beijing last year and said it would be used further in the coming year to ensure stability.

Since its implementation, large-scale demonstrations have been banned and a number of pro-democracy activists and journalists have been arrested, ceased public activities or left Hong Kong.

Despite the protest ban, a group of activists marched through part of Hong Kong on Thursday carrying a banner that called for the release of political prisoners.