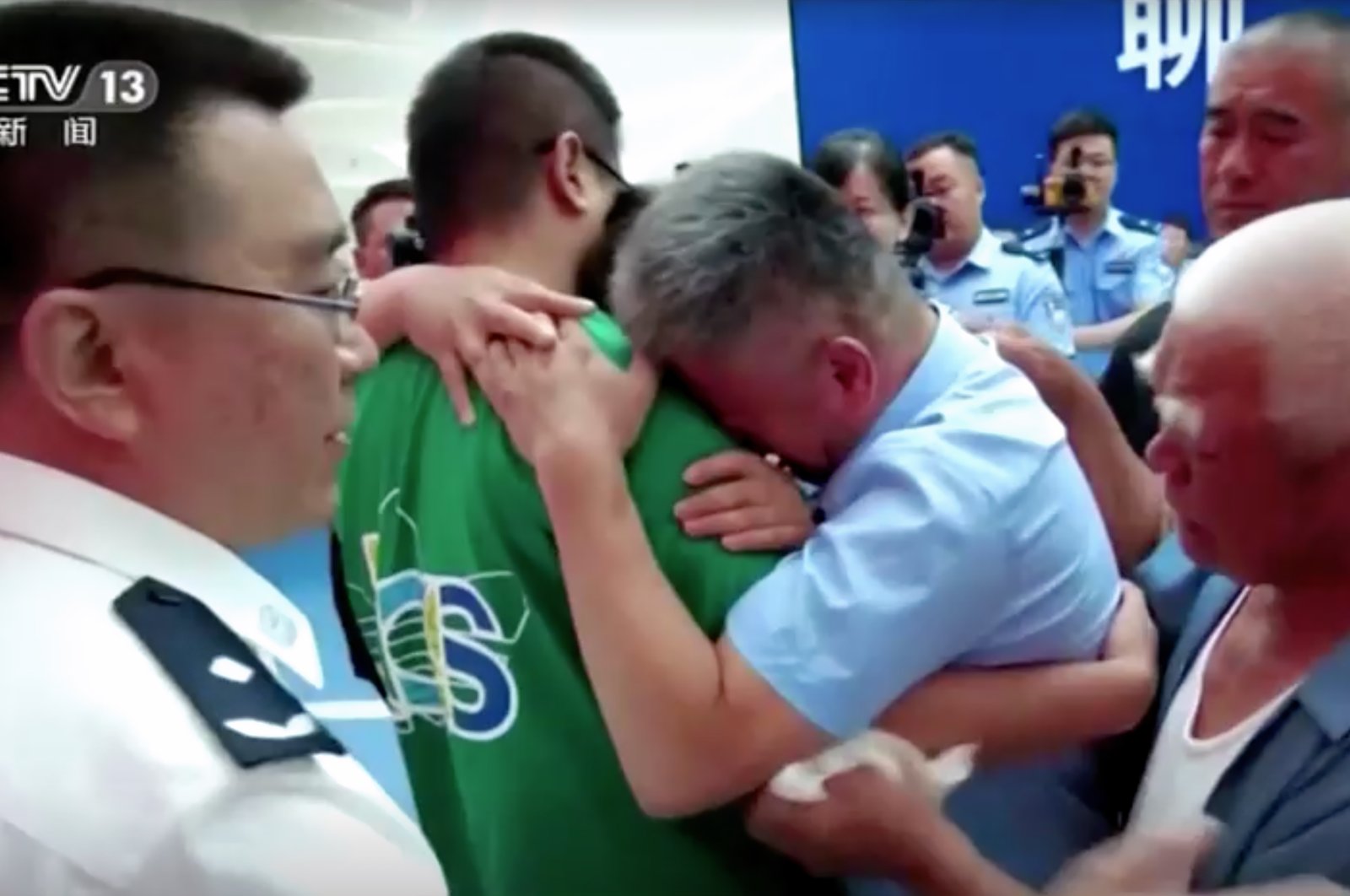 Guo Gangtang hugs his son, who was abducted when he was just two years and five months old. (Screenshot/CCTV via Reuters)
by French Press Agency - AFP Jul 14, 2021 12:42 pm
RECOMMENDED

A Chinese man has been reunited with his kidnapped son after a 24-year search that saw him travel half a million kilometers across China on a motorbike, chasing tip-offs on the boy's whereabouts.

Guo Gangtang's son was just two years and five months old when he was abducted in front of the family home in eastern Shandong province, where he was playing unattended.

Traffickers snatched the boy and sold him to a family in central China, the Ministry of Public Security said Tuesday. Kidnapping and child trafficking became widespread in China from the 1980s, when the draconian one-child rule was enforced and a cultural obsession with sons fueled demand for abducted boys.

After years of searching, police told Guo on Sunday that a DNA test had confirmed that a 26-year-old teacher living in central Henan province was really Guo's long-lost son.

Guo is seen sobbing into his palms while his wife hugs their son, Guo Zhen, during a reunion event in a photo released Tuesday by the public security ministry.

"Now that the child has been found, everything can only be happy from now on," Guo said through tears in a video released by the state-run China News Service. After his son was abducted in 1997, then 27-year-old Guo quit his job and crisscrossed the country on a motorbike with large flags bearing his son's photo tied to the back.

His 500,000-kilometre crusade – which included battling highway robbers, sleeping under bridges and even begging when his money ran out – inspired the 2014 Chinese blockbuster "Lost and Love".

Over the years, Guo has helped seven other families find their lost children and raised awareness about child trafficking – still a taboo topic in China. Guo told reporters that he had visited the city where his son grew up earlier to help another father find his kidnapped boy.

Two suspects linked to the case have been arrested, state-run Global Times reported. Police did not offer details about the family that had purchased Guo's son.

News of the high-profile reunion triggered an outpouring of emotion on social media with over 9 million views. "Parents never give up on their children! Guo's struggle shows the depth of a father's love," one user wrote on Weibo.

Since launching a DNA database of missing families in 2016, police say they have helped more than 2,600 individuals kidnapped as children – some over 60 years ago – to find their biological parents, the public security ministry said.