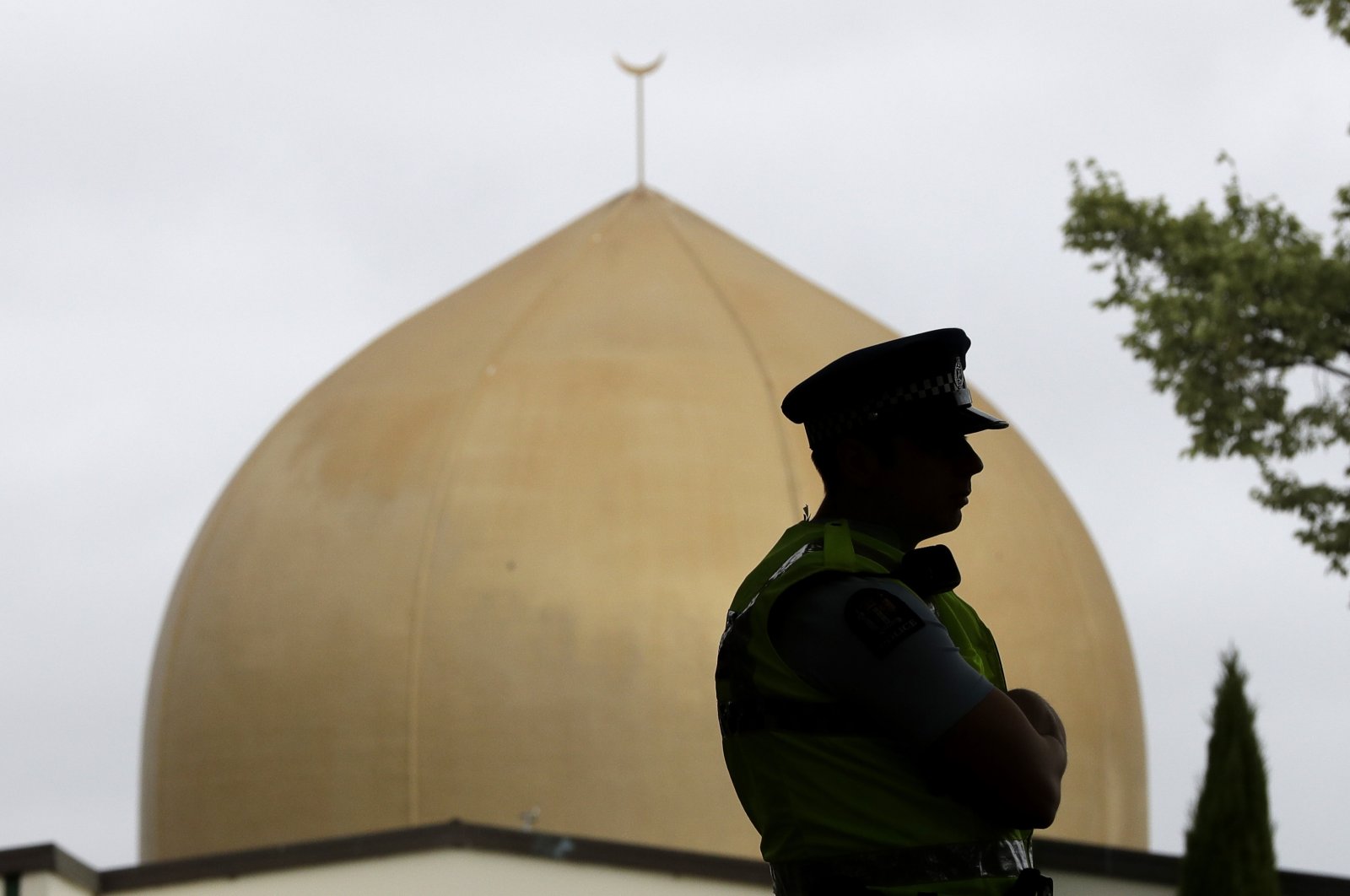 A police officer stands in a park near the Al Noor mosque in Christchurch, New Zealand, Sunday, March 15, 2020. A national memorial in New Zealand to commemorate the 51 people who were killed when a gunman attacked two mosques one year ago has been canceled due to fears over the new coronavirus. (AP Photo)
by Daily Sabah with Agencies Mar 15, 2020 9:11 am
RECOMMENDED

A year after the worst anti-Muslim terror attack in New Zealand, Muslim communities urged the world to move forward and called for a change over the growing anti-Muslim hatred and ideologies.

New Zealand's Prime Minister Jacinda Ardern shared a call for change on Sunday, from the imams from the two mosques targeted by a white supremacist in Christchurch a year earlier. A spokesman for the Al Noor mosque, Tony Green, which was targeted today last year in the Christchurch shootings, says members of the mosque want to move forward and grow understanding and positive things out of the turmoil.

The imams of Al Noor and Linwood mosques, which were at the center of the attack in March 2019 that left 51 people dead, issued a simple request called the Christchurch Invitation, Ardern said on Facebook.

"Our deep wish is that the March 15 flood of support builds into something lasting; something that benefits everyone," the statement said. "Last year we witnessed beautiful intentions and actions when people saw past labels and differences, saw other people as human beings, and came together after that dreadful shooting. "This is an invitation to remember what we saw, to recognize that this was us, and to keep those intentions alive," it said.

People in the New Zealand city of Christchurch honored the 51 worshipers who were killed in a mass shooting a year ago in small but poignant ways Sunday after a planned national memorial event was canceled due to fears it might spread the new coronavirus.

Outside the Al Noor mosque, dozens of leather-clad bikers from the Tu Tangata club performed a traditional Maori haka. They were welcomed by mosque imam Gamal Fouda, who said people of all beliefs and cultures were stopping to pay their respects, and they were all united as New Zealanders.

One of those who survived the shooting at the Linwood mosque was Mazharuddin Syed Ahmed, who said that marking anniversaries was not typically a Muslim tradition but they were doing it so the wider community could grieve and remember. He said the shootings had provoked an outpouring of love and compassion.

Since the Christchurch terrorist attack, Muslims across the world have continued to be the target of growing far-right extremism and an ideology of hatred.

Muslim communities across the world have suffered numerous hate attacks in recent years with many blaming the surge of attacks on an anti-Muslim discourse existing in the media and supported by politicians, most notably in Western countries. The marginalization of Muslim communities has paved the way for public desensitization, turning it into a widespread sociological issue. Some countries have just started to report anti-Muslim attacks, while others have yet to do so. Toward the end of last year, the second anti-Muslim report cited 349 cases throughout 2016 and 2017 in Australia.

A Turkish mosque in Germany’s Rothenbach recently received a letter containing a death threat and a bullet, just a day after the memorial for the victims of Hanau.