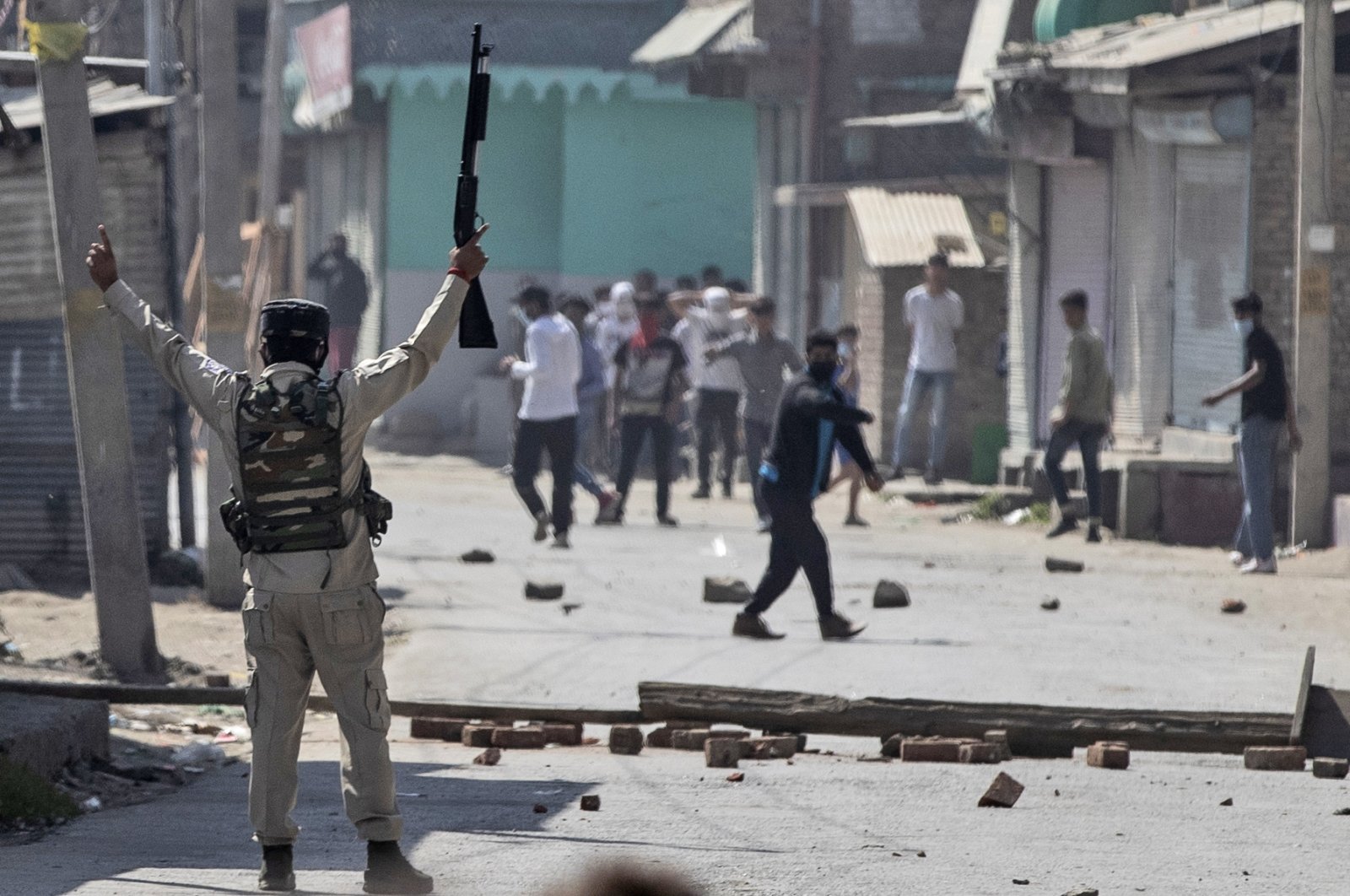 An Indian paramilitary soldier holds up a pellet gun as he challenges Kashmiri protesters marching on the streets in solidarity with rebels engaged in a gunbattle with soldiers, in Srinagar, Indian-controlled Kashmir, Sept. 17, 2020. (AP Photo)
by French Press Agency - AFP Sep 17, 2020 11:04 am
RECOMMENDED

Hundreds of angry residents clashed with Indian government forces Thursday in the main city of disputed Kashmir after a firefight left three suspected rebels and a young woman dead, police and witnesses said.

Counterinsurgency police and federal paramilitary forces surrounded the Batamaloo neighborhood of Srinagar after midnight following a tip-off that armed militants were hiding inside a residential house, triggering an exchange of fire. Three suspected rebels, believed to be locals, were killed in the firefight that lasted several hours, police announced on Twitter.

"One young woman also died during the encounter," a police officer told Agence France-Presse (AFP). "The woman was caught in the crossfire. Her death is unfortunate," the director-general of police, Dilbagh Singh, told reporters.

Armed encounters between rebels and government forces are frequent in the territory but rare in the capital city. The last such firefight occurred in June and left three local rebels dead and 15 houses destroyed in the heart of Srinagar.

Thursday's deaths came a day after similar protests in the northeastern Kashmiri town of Sopore, where Irfan Ahmed Dar, 26, was found dead hours after he was detained by police. Dar's family allege Indian police tortured and killed him, later dumping his body in an open area.

At least 192 rebels, 73 government forces personnel and 47 civilians have been killed in armed violence this year across the disputed territory. India and Pakistan have exchanged small arms fire and mortar shells almost daily for months across their disputed border in Kashmir, leading to the deaths of soldiers and civilians on both sides.

On Wednesday an Indian soldier was killed during cross border firing in the south. Anxiety and anger have deepened in the restive Himalayan region since August last year when New Delhi revoked its semi-autonomous status and brought it under direct federal rule.

The Kashmir dispute, one of the oldest on the agenda of the United Nations Security Council, erupted between India and Pakistan in 1947. Since 1947, more than 94,000 Kashmiris have been killed during clashes with Indian authorities, according to Pakistani sources. Islamabad has urged the international community to fulfill its moral and legal obligation by giving Kashmiris the chance to realize their inalienable right to self-determination in accordance with Security Council resolutions.