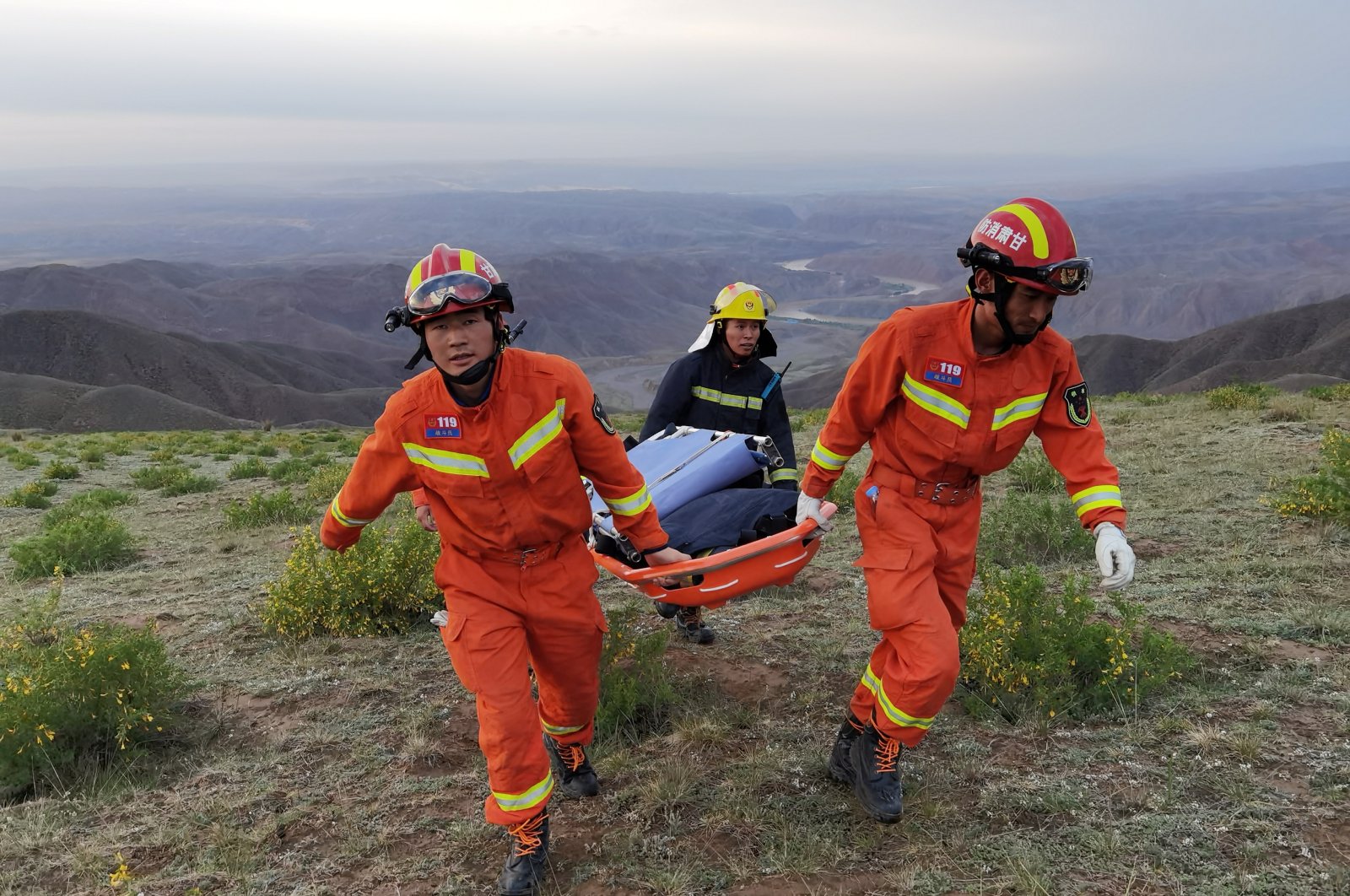 Rescue workers carry a stretcher as they work at the site where extreme cold weather killed participants of a 100-kilometer ultramarathon race in Baiyin, Gansu province, China, May 22, 2021. (Cnsphoto via Reuters)
by REUTERS May 23, 2021 11:34 am
RECOMMENDED

Twenty-one people were killed when extremely cold weather struck during an ultramarathon in the rugged Gansu province in northwestern China, sparking public outrage on Sunday over the lack of contingency planning.

The 100-kilometer (62-mile) race began on Saturday from a scenic area at a bend in the Yellow River known for its sheer cliffs and rock columns. The route would take runners through canyons and hills on an arid plateau at an elevation of over 1,000 meters (3,300 feet). The race kicked off at 9 a.m. (1 a.m. GMT) with runners clad in t-shirts and shorts under overcast skies, according to photographs posted on the social media account of the Yellow River Stone Forest area in Jingtai, a county under the jurisdiction of Baiyin city.

Around noon on Saturday, a mountainous section of the race was hit by hail, freezing rain and gales that caused temperatures to plummet, officials from Baiyin told a news briefing on Sunday.

"The rain was getting heavier and heavier," said Mao Shuzhi, who was about 24 kilometers into the race at the time. Shivering in the cold, she turned back before the high-altitude section, due to previous bad experiences with hypothermia. "At first I was a bit regretful, thinking it might have just been a passing shower, but when I saw the strong winds and rains later through my hotel room window, I felt so lucky that I made the decision," Mao told Reuters.

A massive rescue effort was initiated, with over 1,200 rescuers dispatched, assisted by thermal-imaging drones, radar detectors and demolition equipment, according to state media. A landslide following the severe weather also hampered the rescue work, said officials from Baiyin, about 1,000 kilometers (620 miles) west of the Chinese capital Beijing. A total of 172 people took part in the race. By Sunday, 151 participants had been confirmed safe.

Baiyin – including Jingtai – was expected to see moderate to strong winds from Friday night through Saturday, according to the China Meteorological Administration in Beijing late on Friday. A separate report on the website of provincial weather services on Thursday predicted a "significant" drop in temperature in most parts of Gansu – including Baiyin – through Sunday.

"It was very hot one day before the race, and although the weather forecast said there would be wind and moderate rain in Baiyin on Saturday, everybody believed it would be mild," Mao said. "It's dry in northwestern China."

The deaths sparked public outrage on Chinese social media, with anger mainly directed at the Baiyin government and unhappiness over the lack of contingency planning.

"Why didn't the government read the weather forecast and do a risk assessment?" one commentator wrote. "This is totally a manmade calamity. Even if the weather is unexpected, where were the contingency plans?"

At the news briefing, Baiyin officials bowed and apologized, saying they were saddened by the tragic deaths of the runners and that they were to be blamed.

"The wind is too strong, our thermal blankets have been torn to bits," a runner wrote in a WeChat chatroom to which Mao belonged. Many of the runners had suffered from hypothermia and had lost their way in the strong winds and heavy rain, according to screenshots taken by Mao of the messages in the chatroom.

"A few are unconscious and are foaming at the mouth," another runner wrote.

The Gansu provincial government has set up an investigation team to further look into the cause of the deaths, the People's Daily reported.