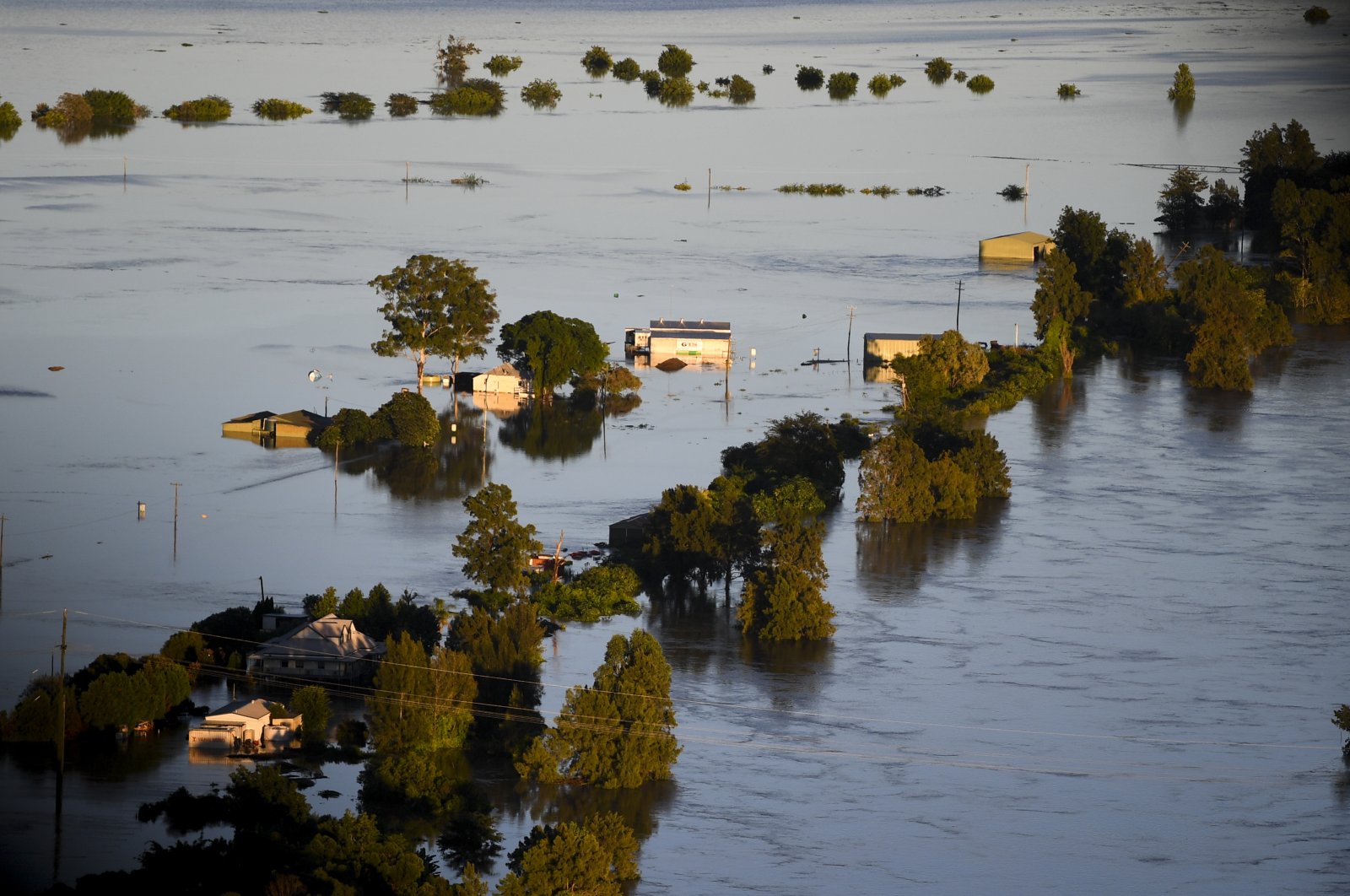 Flood-affected areas are seen from a helicopter in the Windsor and Pitt Town areas along the Hawkesbury River near Sydney, Australia, March 24, 2021. (EPA Photo)
by REUTERS Mar 24, 2021 9:04 am
RECOMMENDED

A man's body was found in a car trapped by floodwaters on Wednesday, the first death linked to wild weather across Australia in recent days that has submerged houses, swept away cars and livestock and cut off entire towns.

More than 40,000 people have been forced to flee their homes as torrential rain sparked dangerous flash floods, and authorities issued new evacuation orders on Wednesday for residents in Sydney's western regions to move to safe zones.

In some other areas, a massive clean-up operation began as sunny skies returned for the first time in days, and food and other emergency supplies were flown in over swamped roads.

The man's body was found in Sydney's northwest by emergency services workers responding to reports of the stranded car. Officials said the man had yet to be identified and no other details were available.

Gladys Berejiklian, the premier of New South Wales (NSW), the worst-hit state, warned that water levels would keep rising in some areas as major dams continued to overflow and rivers bulged.

"What we still have to be aware of is the fact that thousands and thousands of people are still on evacuation warnings, that the rivers will continue to swell, that catchments will continue to experience flows of water not seen in 50 years and in some places 100 years," Berejiklian told reporters in Sydney.

The Insurance Council of Australia, the peak industry body, said about 17,000 damages claims worth around A$254.2 million ($193.32 million) had been lodged by Wednesday morning across NSW and Queensland.

Homes have been submerged, livestock swept away and crops drowned on a large scale. There have also been many animal rescues, with watercraft used to move dogs, cattle and even an emu, away from the floodwaters. In the country's arid center, water cascaded down Uluru, a rare phenomenon described by the national park on social media as "unique and extraordinary."

Australian Prime Minister Scott Morrison said on Wednesday that heavy-load helicopters would be prepared to transport food to supermarkets where supplies were running short.

"The expanse of water that went right across that region was quite devastating to see," Morrison said in parliament after he toured flood-affected areas by helicopter.

Several hundred Australian Defence Force personnel will be sent to flood-affected areas in the country's east over the next few days to help in the recovery, Australia's Emergency Management minister David Littleproud said on Wednesday.

"Their job will be out there cleaning up, making sure that we get rid of the debris, having boots on the ground," Littleproud said.

The Port of Newcastle, which last year shipped 158 million tonnes of coal, slowed ship movements earlier in the week but said on Wednesday it was continuing to operate.

Forecasters said the weather system will shift to the island state of Tasmania on Wednesday, bringing heavy rains and localized flooding.