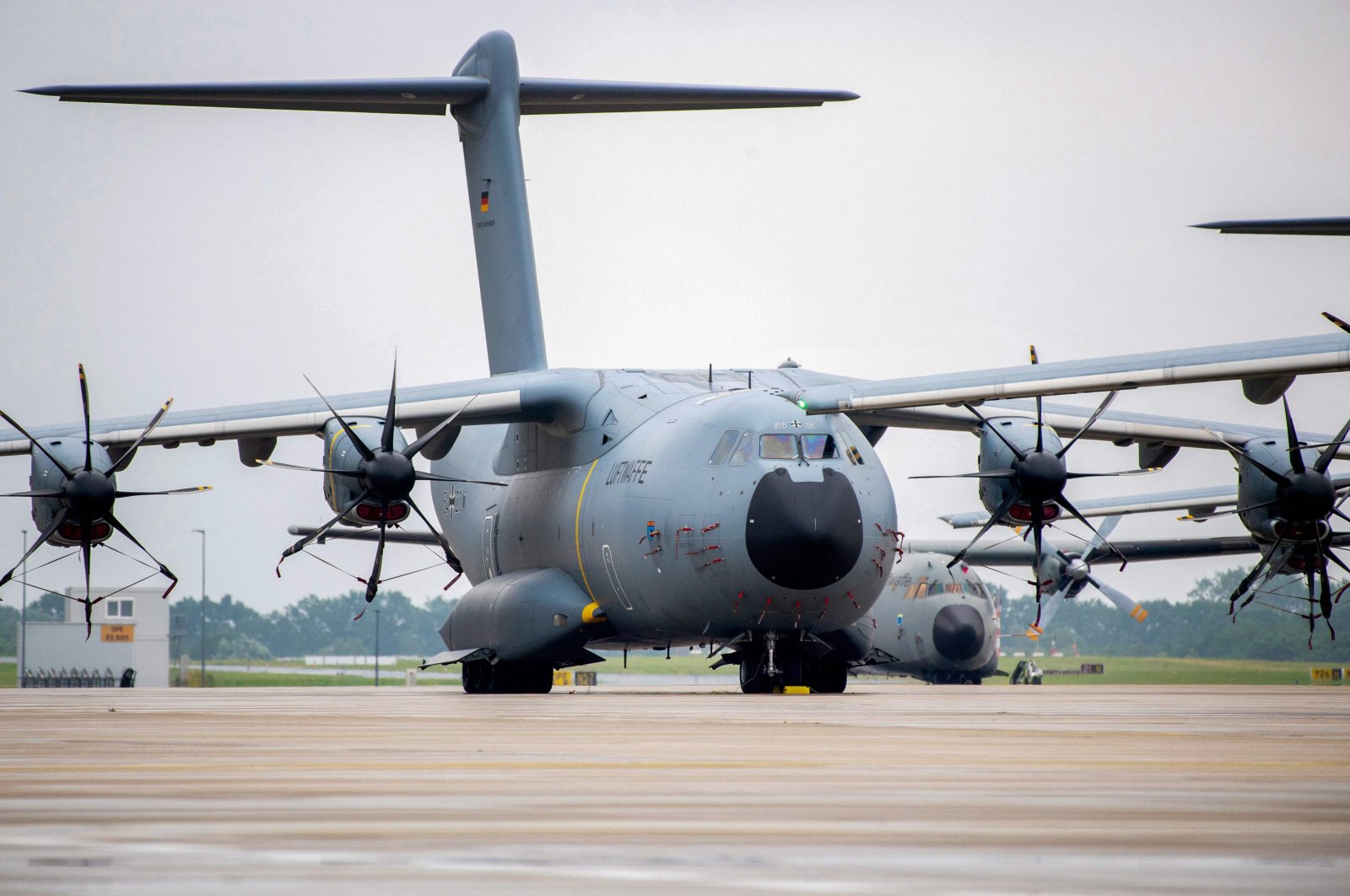 Airbus A400M cargo planes of the German armed forces Bundeswehr stand on the tarmac at the military air base in Wunstorf, northern Germany, on June 30, 2021, as German soldiers returning from Afghanistan are expected to land here. (AFP Photo)
by Agencies Jun 30, 2021 11:50 am
RECOMMENDED

Germany and Italy have completed the withdrawal of their troops from Afghanistan, the defense ministries of both countries announced, ending a nearly 20-year deployment in the country alongside the U.S. and other international forces.

The Tuesday announcement of the pull-out of German troops, whose presence there was second only to the U.S. forces, came as the U.S. aims to complete its own withdrawal by Sept. 11.

"After nearly 20 years of deployment, the last soldiers of our Bundeswehr have left Afghanistan this evening," said German Defense Minister Annegret Kramp-Karrenbauer in a statement. "They are on the way back.

"A historic chapter comes to an end, an intensive deployment that challenged and shaped the Bundeswehr, in which the Bundeswehr proved itself in combat," she added.

On Twitter, the minister offered her thanks to all the 150,000 men and women who had served there since 2001, saying they could be proud of their service.

She also paid tribute to those killed and wounded in service there. "You will not be forgotten," she said.

According to the army, 59 German soldiers have been killed since 2001 in the course of their service in Afghanistan.

The last of the troops were airlifted out of their base at Mazar-i-Sharif in northern Afghanistan on two German A400 Ms and two U.S. C17s.

"However, the international community's commitment to Afghanistan, starting with Italy, does not end here. It will continue in other forms, from strengthening development cooperation to supporting Afghan republican institutions."

According to the ministry, 50,000 Italian soldiers were deployed to Afghanistan over the past 20 years. Over that period, 53 soldiers died and 723 were injured.

Alongside Turkey, the U.K. and the U.S., Germany and Italy formed a NATO training and support mission called Resolute Support. Between them, the five countries supplied 6,000 members of the 9,600-strong mission.

Smaller contributors to the force, such as Denmark, Estonia and Spain, have already pulled out their forces.

Meanwhile, Turkey is negotiating taking over control and security of Kabul's international airport.

Germany stepped up its pull-out after U.S. President Joe Biden announced he was pulling U.S. troops out of the country after 20 years there.

In April, Germany's defense ministry had announced it planned to pull out its troops by early July.

Biden aims to have U.S. troops out of Afghanistan by Sept. 11, the 20th anniversary of the devastating al-Qaida attacks on the U.S.

The pace of the U.S. pull-out has led to speculation that he aims to have them all home before July 4, Independence Day in the U.S.

Questioned by Agence France-Presse (AFP) about the timetable for the pull-out Tuesday, a NATO spokesperson would only say: "The withdrawal of forces is proceeding in an orderly and coordinated manner.

"While we reduce our military presence, we are continuing to support Afghanistan, by ensuring training and financial support for the security forces and the Afghan institutions, by maintaining a diplomatic presence in Kabul and by financing the functioning of the international airport," the sourced added.

The Pentagon declined to comment on the German announcement.

The security situation in Afghanistan has been deteriorating for several weeks.

Fighting has surged since early May when the U.S. military began its final withdrawal of troops, with the Taliban claiming to have recently captured more than 100 of the over 400 districts across Afghanistan.

On Tuesday, Gen. Scott Miller, the top U.S. commander in Afghanistan did not rule out conducting airstrikes against the Taliban if they pressed on with their campaign.

Some observers fear the Taliban might once again seize the capital Kabul once the Western troops have left, and have expressed fears for the thousands of Afghans who worked alongside the international force.

Washington has already announced it is preparing for the evacuation of its Afghan translators.

The international intervention in Afghanistan began on Oct. 7, 2001, less than a month after the 9/11 attacks that killed around 3,000 people in the U.S.

The country's Taliban regime had been sheltering Osama bin Laden and his al-Qaida movement, which carried out the attacks. Within weeks, U.S.-led forces had overthrown them.