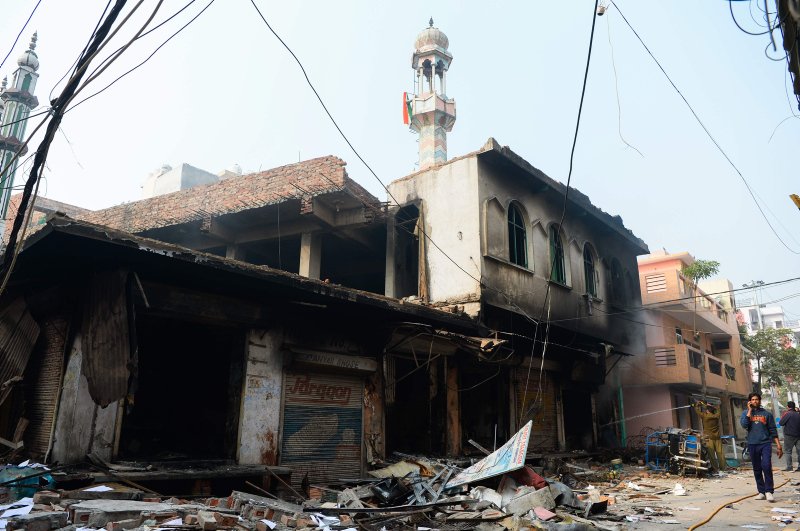 The Indian police were accused of turning a blind eye to Hindu mobs attacking Muslims in the Delhi riots as the death toll rose to 27 on Wednesday.

One video circulated on social media showed men ripping out the muezzin's loudspeaker on top of the mosque's minaret and installing a Hindu religious flag.

Locals accused the police of doing nothing to help – or worse. "We tried to make many calls to the police ... that people are entering our neighborhoods chanting 'Jai Shree Ram,'" said Naeem Malik, referring to a popular Hindu chant.

"But the police did not help us at all. We tried to save the women at the protest site but instead, policemen started beating us up," he said, showing wounds on his leg and hands.

Elsewhere a firetruck tried to put out blazes from the previous night, the air thick with smoke from still-smoldering cars, motorbikes, shops and homes.

"They say we are not Indians, but we are Indians by blood," Farhat, 22, a student of Islamic studies, said in her father's shop as the police looked on.

The area is home to mostly poorer economic migrants from elsewhere in India living in shanty neighborhoods.

The brutal violence, which also left more than 200 injured, started after protests against the CAA seen by many critics as anti-Muslim and part of Prime Minister Narendra Modi's Hindu nationalist agenda.

Delhi's chief minister, Arvind Kejriwal, a political opponent, called for the army to be deployed and for a curfew to be imposed.