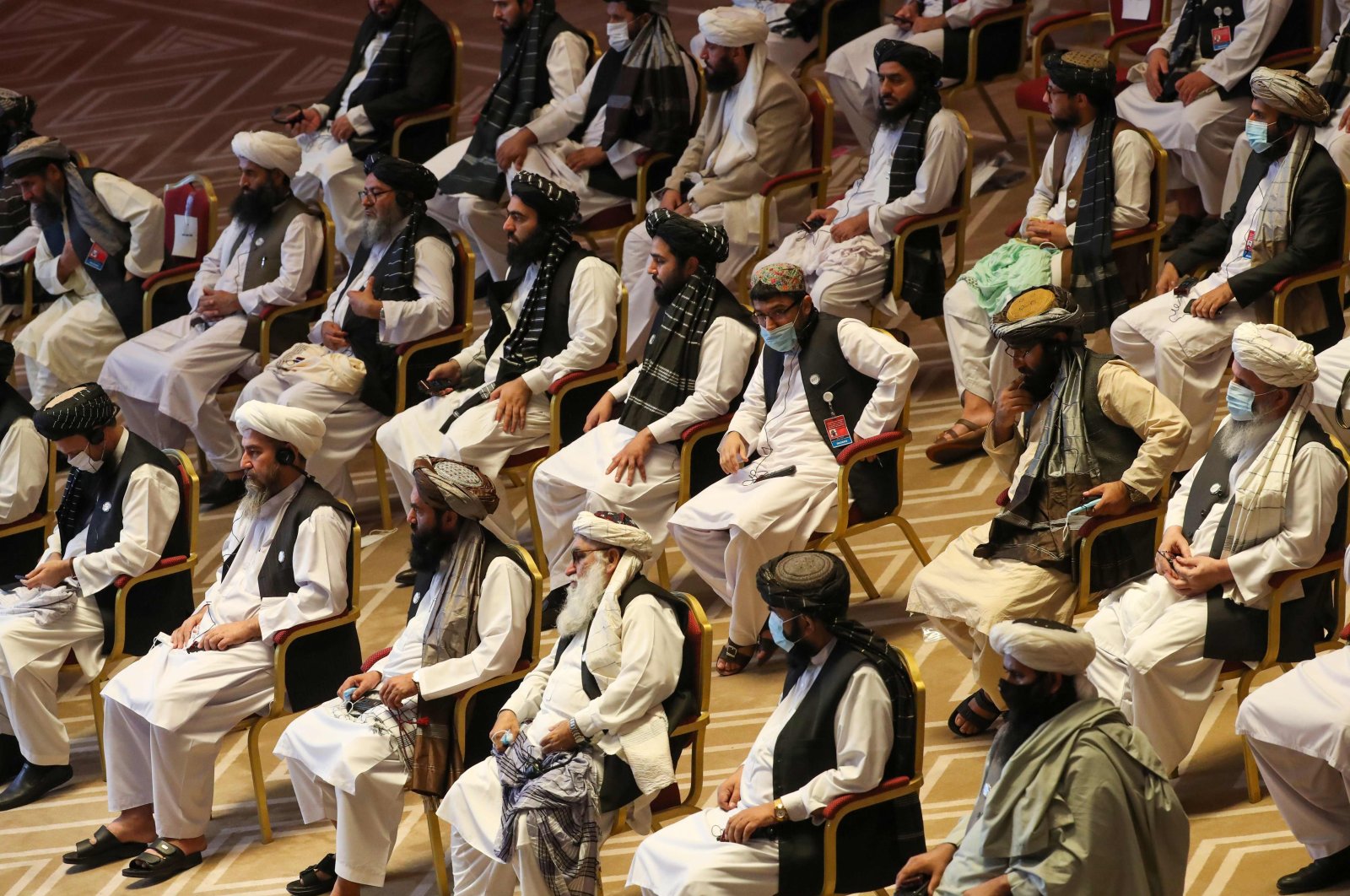 Members of the Taliban delegation attend the opening session of the peace talks between the Afghan government and the Taliban in Doha, Qatar, Sept. 12, 2020. (AFP Photo)
by ASSOCIATED PRESS Sep 12, 2020 9:40 am
RECOMMENDED

Afghanistan’s warring sides started negotiations for the first time, bringing together the Taliban and delegates appointed by the Afghan government Saturday for historic meetings aimed at ending decades of war.

U.S. Secretary of State Mike Pompeo attended the opening ceremony in Qatar, where the meetings are taking place and where the Taliban maintain a political office. The start of negotiations was the latest in a flurry of diplomatic activity by the Trump administration ahead of the U.S. presidential election in November.

“Each of you carry a great responsibility,” Pompeo told the participants. “You have an opportunity to overcome your divisions."

While Saturday's opening was about ceremony, the hard negotiations will be held behind closed doors and over a number of sessions. But following a meeting with the Taliban on Saturday in Doha, Washington's peace envoy Zalmay Khalilzad said the U.S. and every Afghan would like to see a deal “sooner rather than later.”

The sides will be tackling tough issues in the negotiations, which will include the terms of a permanent cease-fire, the rights of women and minorities, and the disarming of tens of thousands of Taliban fighters and militias loyal to warlords, some of them aligned with the government.

Khalilzad said a quick, permanent cease-fire is unlikely, but held out hope for a gradual reduction in violence until both sides are ready to end their fighting. Mistrust runs deep on both sides, he said.

The Afghan negotiation teams are also expected to discuss constitutional changes and power sharing during their talks. Subsequent rounds of negotiations could be held outside Doha. Germany is among the countries offering to host future negotiations.

Even seemingly mundane issues like the flag and the name of the country — the Islamic Republic of Afghanistan or the Islamic Emirate of Afghanistan, as the Taliban's administration was known when it ruled — could find their way onto the negotiation table and roil tempers.

Among the government-appointed negotiators are four women, who have vowed to preserve women's rights in any power-sharing deal with the hard-line Taliban. This includes the right to work, education and participation in political life, all denied to women when the Taliban ruled Afghanistan for five years.

The Taliban were ousted in 2001 by a U.S.-led coalition for harboring Osama bin Laden, the architect of the Sept. 11 terrorist attacks on America.

No women are on the Taliban's negotiation team, led by their chief justice Abdul Hakim. The insurgent movement has said it accepted a woman's right to work, go to school and participate in politics but would not accept a woman as president or chief justice.

Deeply conservative members of the government-appointed High Council for National Reconciliation, which is overseeing the talks, also hold that women can't serve in either post.

At the opening ceremonies, there was some sign of Taliban changes in attitudes. Several Taliban jostled to take photographs of leader Mullah Abdul Ghani Baradar as he addressed the ceremony.

Baradar said the Taliban envisioned a system that embraces all Afghans, without elaborating. He also urged patience as the negotiations proceeded, urging both sides to stick with the talks even in the face of problems.

Abdullah Abdullah, who heads Kabul's High Council for National Reconciliation, said in his remarks that the sides do not need to agree on every detail, but should announce a humanitarian cease-fire.

Both sides will be “peace heroes” if negotiations bring about a lasting peace that protects Afghanistan's independence and leads to a system preserves the rights of all people, said Abdullaah..

Pompeo warned that their decisions and conduct will affect both the size and conduct of U.S. assistance.

He encouraged the negotiators to respect Afghanistan’s rich diversity, including women and ethnic and religious minorities. He said that while the choice of Afghanistan’s political system is theirs to make, the U.S. has found that democracy and rotation of political power works best.

“I can only urge these actions. You will write the next chapter of Afghan history,” he said.

Pompeo spoke the day after the 19th anniversary of the Sept. 11 attacks. He said the U.S. will never forget the 9/11, and that America welcomes the Taliban commitment not to host terrorist groups, including al-Qaida, which was responsible for the carnage.

The intra-Afghan negotiations were laid out in a peace deal Washington signed with the Taliban on Feb. 29. At that time the deal was touted as Afghanistan's best chance at peace in 40 years of war.

Yet Abdullah noted that since that agreement was reached, 1,200 people have been killed and more than 15,000 wounded in attacks across the country. The United Nations has urged a reduction of violence and criticized civilian casualties on both sides.

The current talks had been originally expected to begin within weeks of the signed agreement between the Taliban and the U.S.

But delays disrupted the timeline. The Afghan government balked at releasing 5,000 Taliban prisoners, which was stipulated in the deal as a sign of good faith ahead of the negotiations. The Taliban were required to release 1,000 government and military personnel in their custody.

Political turmoil in Kabul further delayed talks as Afghan President Ashraf Ghani and his rival in controversial presidential polls the year before, Abdullah Abdullah, squabbled over who won, with both declaring victory.

The Taliban refusal to reduce the violence further hindered the start of talks.

Still the complete withdrawal of U.S. troops from Afghanistan does not hinge on the success of the talks.

Washington's withdrawal is contingent on the Taliban honoring commitments to fight terrorist groups, in particular the Daesh affiliate in Afghanistan, and ensure that Afghanistan cannot again be used to attack America or its allies.

“The Taliban have work to do. We see progress, but they have work to do,” said Khalilzad. “We have a timetable which is that withdrawal should be completed if the conditions are met by the end of April.”

The U.S. has refused to give specific of the guarantees citing security reasons, but the withdrawal of U.S. troops has already begun. President Donald Trump has said tha"t by November, about 4,000 soldiers will be in Afghanistan, down from 13,000 when the deal was signed in February. All troops will be gone by April if Taliban fulfill their commitment to fight terrorists.

“Washington’s goals are very simple: It wants intra-Afghan talks happening as soon as possible, because these give the White House political cover for an imminent withdrawal,” said Michael Kugelman, deputy director of the Washington-based Wilson Center's Asia program.

“Trump likely wants a peace deal before the election, so that he can garner political benefits galore and pitch himself as a Nobel Peace Prize candidate. But presumably even he realizes it’s wildly unrealistic to expect a deal so soon. These types of negotiations tend to be measured in years, not weeks.”

The talks in Doha follow the Trump administration-brokered recognition of Israel by two Gulf Arab nations - Bahrain on Friday and the United Arab Emirates in August.