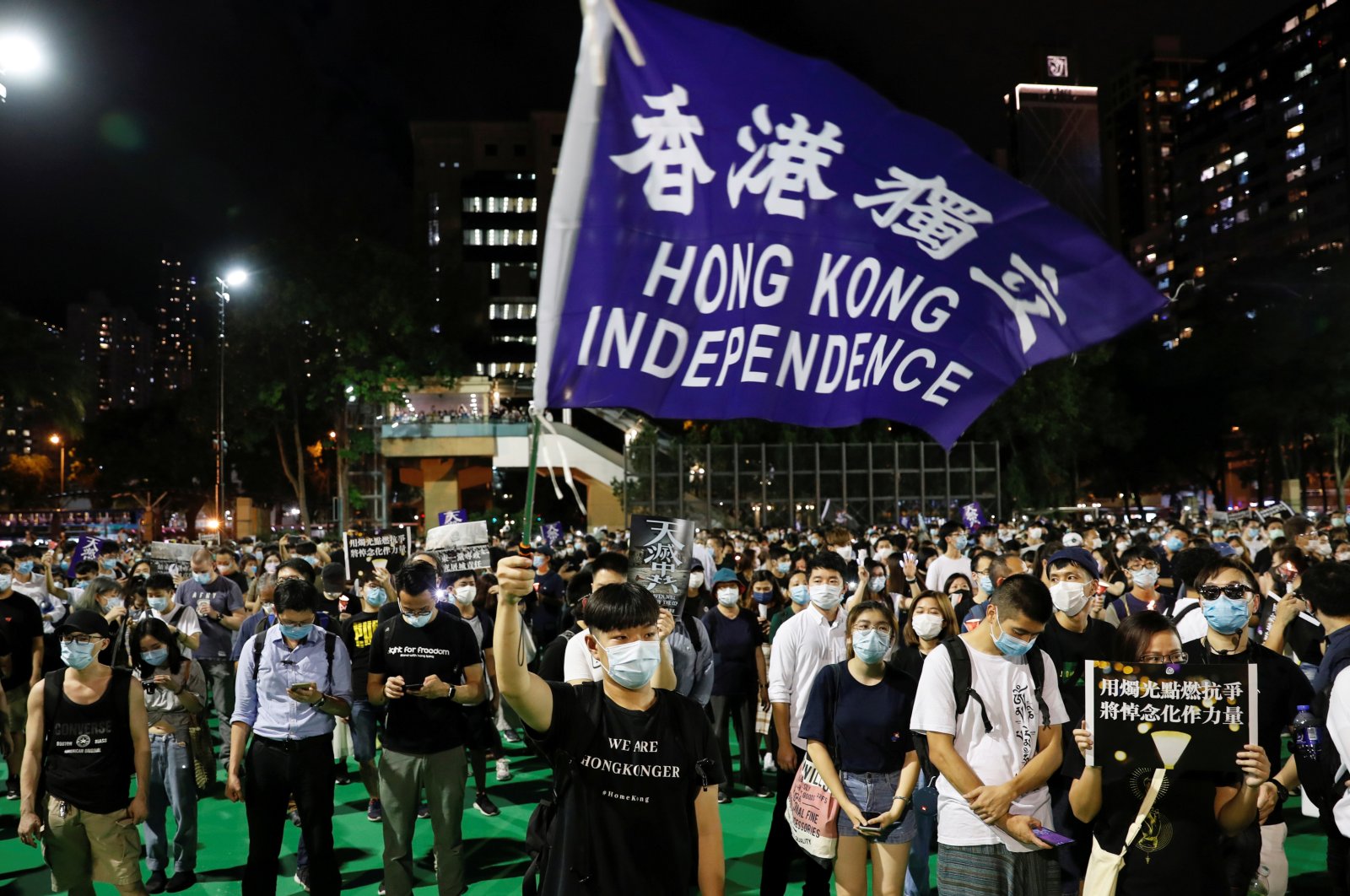 A person wearing protective face mask waves a Hong Kong independence flag as protesters take part in a candlelight vigil to mark the 31st anniversary of the crackdown of pro-democracy protests at Beijing's Tiananmen Square in 1989, after police reject a mass annual vigil on public health grounds, at Victoria Park, in Hong Kong, China June 4, 2020. (Reuters Photo)
by Agencies Jun 09, 2020 10:05 am
RECOMMENDED

Hong Kong pro-democracy groups and protesters have called on people to return to the streets on Tuesday to mark the anniversary of the city's most significant protest movement in recent memory.

Social media and private channels were filled with calls for citywide "blossom everywhere" protests on Tuesday morning, as protesters urged one another to stay safe and avoid arrest while marking a "national awakening."

On June 9, 2019, as many as one million people marched through the streets of Hong Kong in police-sanctioned rallies to protest an extradition bill that would have allowed people to be sent to mainland China on trial. Hong Kong's Chief Executive Carrie Lam later suspended the bill.

But none of the protesters' four other demands have been met, including an independent investigation into police violence.

The police-sanctioned rallies of 2019 that allowed hundreds of thousands to protest peacefully without risking arrest have yet to be seen in 2020.

On Tuesday, Hong Kong citizens aiming to protest Beijing's tightening grasp on the territory are up against increasingly difficult odds.

In May, China's main legislative body voted to impose national security laws in Hong Kong, widely understood as a threat to Hong Kong's autonomy under the framework in place since the territory was handed over from London to Beijing in 1997.

"Everyone has to learn their lesson, including the Hong Kong government,” Carrie Lam told reporters before a weekly meeting with advisors. "Hong Kong cannot bear that kind of chaos, and the people of Hong Kong want a stable and peaceful environment to be able to live and work here happily.”

Lam did not elaborate on what lessons should have been learned.

Hong Kong-based political scientist Jean-Pierre Cabestan told DPA that police are unlikely to sanction any political rallies ahead of the passing of a new national security law even if social distancing regulations are lifted.

"The risk, of course, is that the march takes place anyway and becomes violent and things get out of control," he said.

The protests have strong support among Hong Kong's 7.5 million people, according to opinion polls, with about one-third of the population opposed.

"The mass protest on 9 June last year has been etched in the collective memory of Hongkongers," the Civil Human Rights Front, which organized the event, wrote in a Facebook post on Tuesday. "It also marks the beginning of our togetherness in defending our beloved city.”

China blames the protests in part on foreign intervention and is hastening to enact a national security law for Hong Kong aimed at curbing secessionist and subversive activities.

Hong Kong’s problems are a result of the opposition and foreign allies "attempting to turn Hong Kong into an independent or semi-independent political entity and a pawn to contain China’s development,” Zhang Xiaoming, deputy director of the Chinese Cabinet’s Hong Kong and Macao Affairs Office, said in a speech posted on the office’s website Monday.

"The more the bottom line of national security is consolidated, the greater the space will be for Hong Kong to leverage its advantages under ‘one country, two systems,’” Zhang said.

China will "unswervingly” protect its sovereignty and block any outside interference in Hong Kong’s affairs, he said.