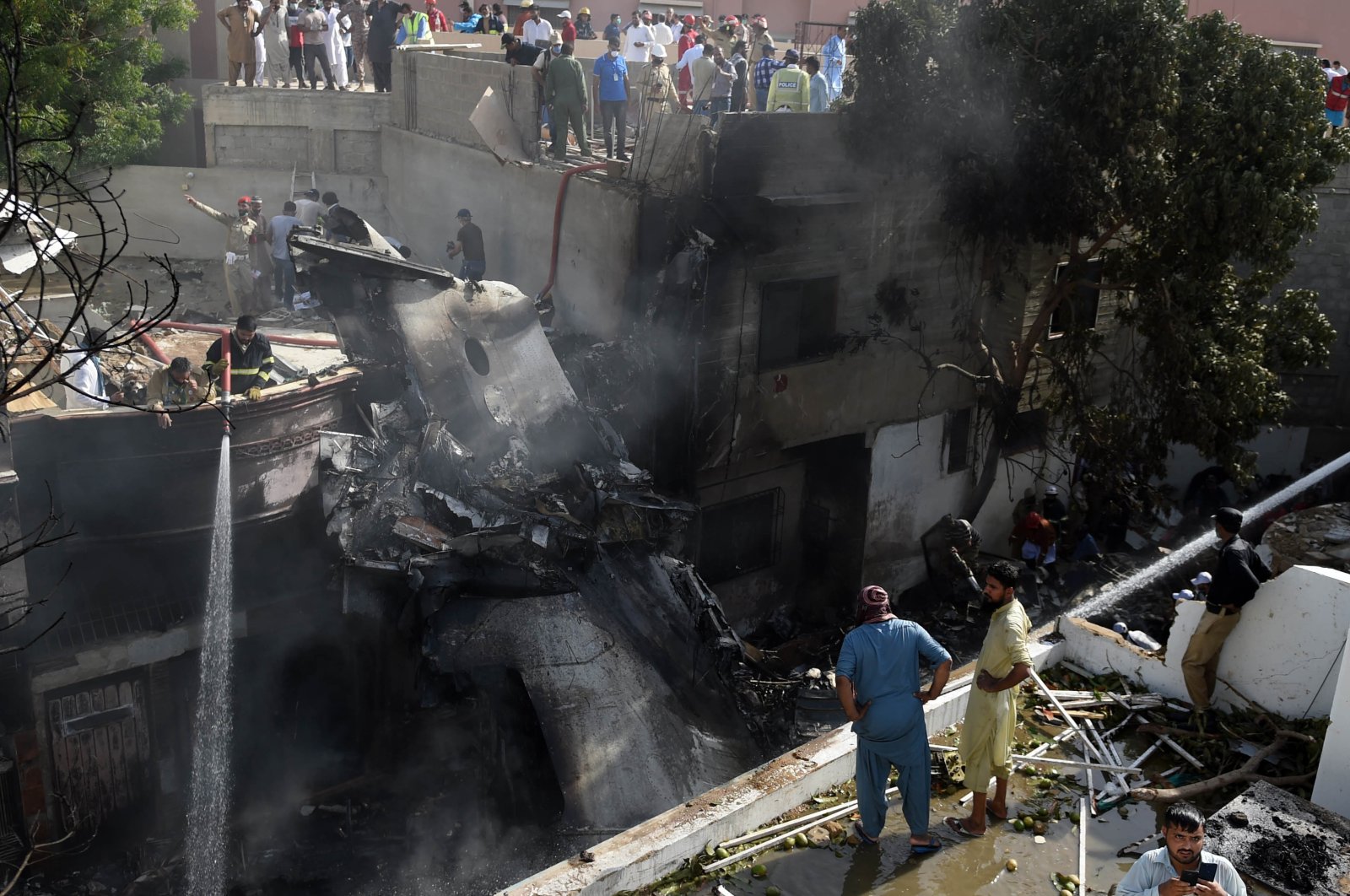 Locals inspect the wreckage of a passenger plane of state-run Pakistan International Airlines, at the scene after it crashed in a residential area, in Karachi, Pakistan, May 22, 2020. (EPA-EFE Photo)
by Compiled from Wire Services Jun 24, 2020 11:20 am
RECOMMENDED

A plane crash that killed 97 people in Pakistan last month was caused by human error by the pilot and air traffic control, according to an initial report into the disaster released Wednesday.

Presenting an initial inquiry report in parliament, the country's aviation minister Ghulam Sarwar Khan said the pilots were not "focused" because of the coronavirus pandemic, although the aircraft was "100% fit."

"The pilot as well as the controller didn't follow the standard rules," Khan said.

He said the pilots had been discussing the coronavirus pandemic as they attempted to land the Airbus A320.

"The unfortunate plane was 100% fit to fly. It had no technical fault at all. The captain and the co-pilot were experienced and medically fit to fly the plane."

The inquiry report showed the pilot had not mentioned any technical fault during the final approach, Khan added, although the aircraft was flying at 7,220 feet (2,200 m) when 10 miles (16 km) distant from the runway.

Khan added that air traffic control drew the pilot's attention to the irregularity, and advised against landing, urging another go-around instead.

"But, despite this, the pilot ignored the controller's instruction," the minister said.

"When they were in landing position, they were warned by the controllers, but he said, 'I'll manage'... and then they started discussing coronavirus again."

The Pakistan International Airlines (PIA) Airbus A320 crashed last month in a residential district of the southern port city of Karachi, killing all but two of the 99 aboard.

Flight PK8303, from the eastern city of Lahore, came down about a kilometer (0.6 of a mile) short of the runway on its second attempt to land.

Airworthiness documents showed the plane last received a government check on Nov. 1, 2019. PIA’s chief engineer signed a separate certificate April 28 saying all maintenance had been conducted. It said “the aircraft is fully airworthy and meets all the safety” standards.

Ownership records for the Airbus A320 showed China Eastern Airlines flew the plane from 2004 until 2014. The plane then entered PIA’s fleet, leased from GE Capital Aviation Services.