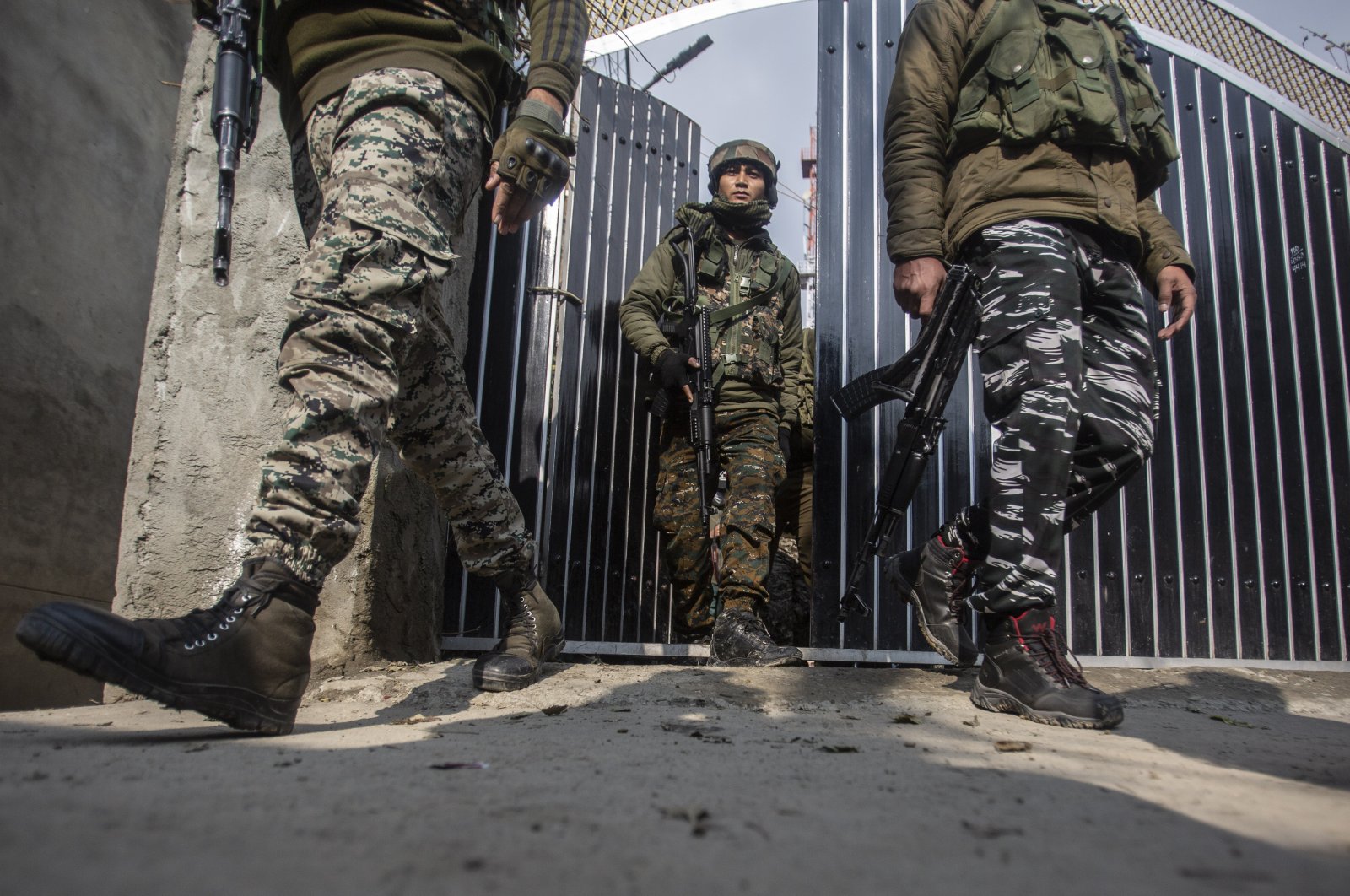 Indian soldiers come out of the house of a leader of the People’s Democratic Party where a personal security officer was killed in a rebel attack in Srinagar, Indian controlled Kashmir, Dec. 14, 2020. (AP Photo)
by Agencies Dec 20, 2020 1:18 pm
RECOMMENDED

In a statement, Khan said India under a "well-thought-out policy is swiftly acting to grab Kashmiri land to turn the whole IOJK (Indian-occupied Jammu and Kashmir) to its colony."

"The IOJK government has expedited the process to transfer 200 kanals (25 acres) agricultural land to the ex-Indian military officials for construction of the military settlement," said Khan.

Quoting an unnamed official an Indian news website ThePrint.in reported that the colony is being primarily set up to "provide housing facilities to retired armed forces personnel and their families belonging to Jammu and Kashmir. The colony will also cater to widows and families of deceased personnel of the armed forces."

Condemning the move, Khan called it the "first military settlement to settle retired army personnel who had massacred Kashmiris."

The attempts to construct such colonies by India in Kashmir have in the past faced resistance from local people.

The pro-freedom leadership led by nonagenarian Syed Ali Geelani had cautioned the Indian government against "settling the former Indian army men in the disputed territory of Jammu and Kashmir."

According to ThePrint., the land identification process for the said colonies "was expedited in October this year."

"It has been said the government wants to bring in troops from outside and settle them here. It is simply not true. The proposed facility will first take care of ex-servicemen who are natives of Jammu and Kashmir. They were state subjects and now domiciles," an official told the online publication.

On Saturday, Pakistan also summoned a senior Indian diplomat to protest an alleged cease-fire violation and the "deliberate targeting" of United Nations observers in Kashmir.

"It was communicated to the Indian side that the brazen act was a flagrant violation of established international norms and represented a complete disregard for principles enshrined in the United Nations Charter," the Foreign Ministry said in a statement.

On Friday, Pakistan accused Indian troops of "deliberately" opening fire on a U.N. vehicle carrying two observers on the Pakistani side of the Line of Control (LoC), a de facto frontier that divides Kashmir into two parts controlled by Pakistan and India.

The U.N. observers were on their way to meet with the victims of the Indian cease-fire violation. Both the observers remained unharmed and were evacuated by the Pakistani army.

Jammu and Kashmir, a Muslim-majority Himalayan region, is held by India and Pakistan in parts but claimed by both in full. A small sliver of the region is also controlled by China.

Some Kashmiri groups have been fighting against Indian rule for independence or unification with Pakistan.