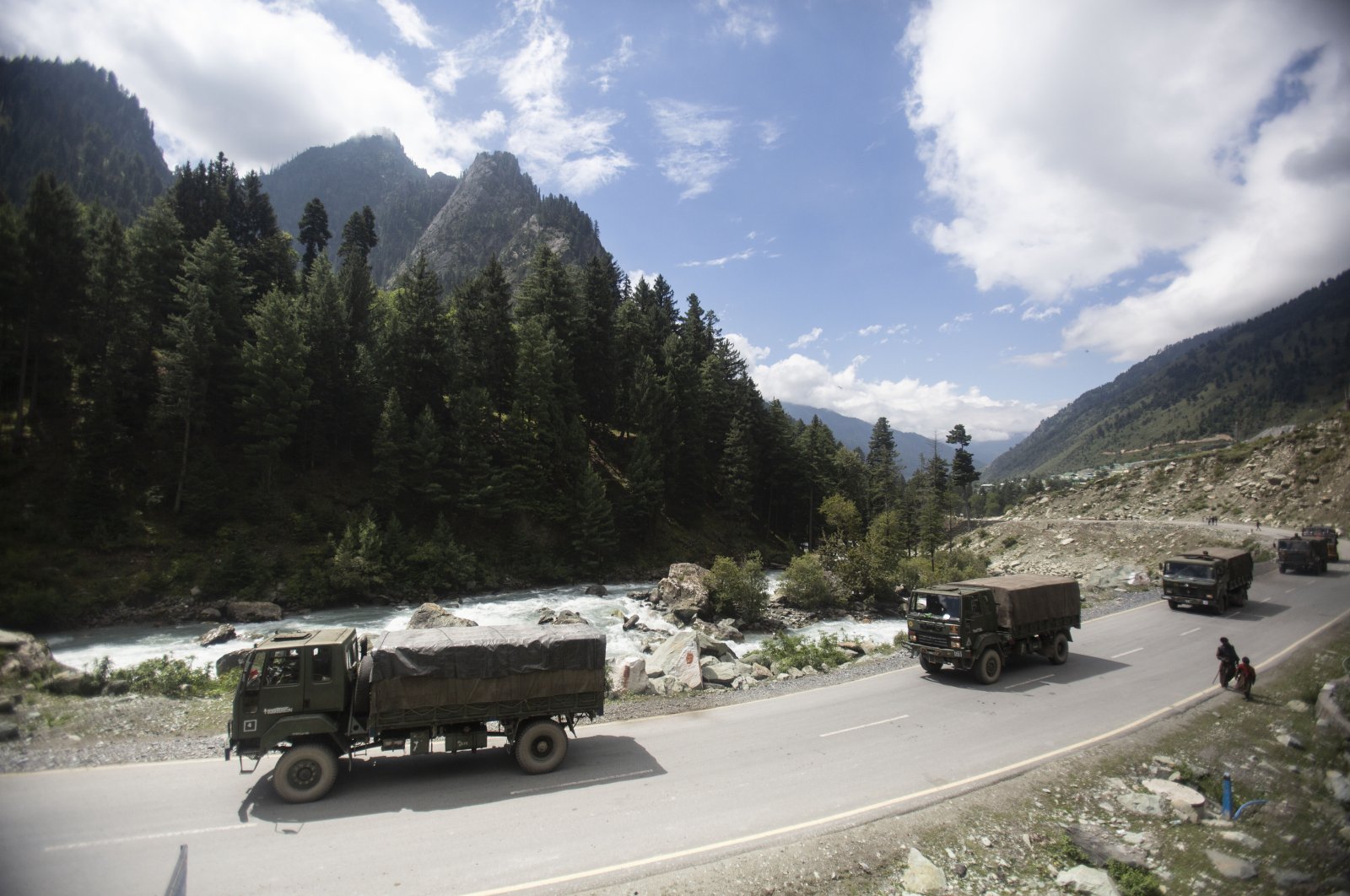 An Indian army convoy moves on the Srinagar-Ladakh highway toward the cold-desert Ladakh region where China and India have been engaged in a tense standoff since May, at Gagangeer, northeast of Srinagar, Indian-controlled Kashmir, Sept. 1, 2020. (AP Photo)
by Agencies Feb 11, 2021 10:13 am
RECOMMENDED

India and China have agreed to pull back troops from a bitterly contested lake area high in the western Himalayas, the Indian defense minister said Thursday, in a breakthrough after a monthslong standoff on the disputed border.

Rajnath Singh told parliament the accord over Pangong Tso, a glacial lake at 14,000 feet (4,270 meters), had been reached after several rounds of talks between military commanders and diplomats from the nuclear-armed neighbors.

"Our sustained talks with China have led to agreement on disengagement on the north and south banks of the Pangong lake," he said, according to remarks carried by Reuters.

China's defense ministry said frontline troops from the two countries had begun to pull back from the shores of the lake on Wednesday. Indian Defense Minister Rajnath Singh told the parliament on Thursday that two countries will remove forward deployments in a "phased, coordinated and verified manner.”

The standoff began in April last year when India said Chinese troops had intruded deep into its side of the Line of Actual Control or the de facto border in the Ladakh area in the western Himalayas. China said its troops were operating in its own area and accused Indian border guards of provocative actions.

Tensions exploded into hand-to-hand combat with clubs, stones and fists on June 15 that left 20 Indian soldiers dead. China is believed to also have had casualties but has not given any details. Since then, both countries have stationed tens of thousands of their soldiers backed by artillery, tanks and fighter jets along the fiercely contested Line of Actual Control (LAC), with troops settling in for the harsh winter. The LAC separates Chinese-held and Indian-held territories from Ladakh in the west to India’s eastern state of Arunachal Pradesh, which China claims in its entirety.

It is broken in parts where the Himalayan nations of Nepal and Bhutan border China. It divides areas of physical control rather than territorial claims. India claims the Chinese-controlled Aksai Chin plateau as part of the Ladakh region. According to India, the control line is 3,488 kilometers (2,167 miles) long, while China says it is considerably shorter. Relations between the two countries have often been strained, partly due to their disputed border.

According to The Associated Press (AP) they fought a border war in 1962 that spilled into Ladakh and ended in an uneasy truce. Since then, troops have guarded the undefined border and occasionally brawled. They have agreed not to attack each other with firearms.

But in September, China and India accused each other of sending soldiers into the other’s territory and fired warning shots for the first time in 45 years, raising the specter of full-scale military conflict. India unilaterally declared Ladakh a federal territory and separated it from disputed Kashmir in August 2019, ending Indian-administered Kashmir’s semi-autonomous status. It also vowed to take back the Aksai Chin plateau.

China was among the first countries to strongly condemn the move, raising it at international forums including the U.N. Security Council. India and China have not been able to agree on their 3,500-kilometer border since the war in 1962.