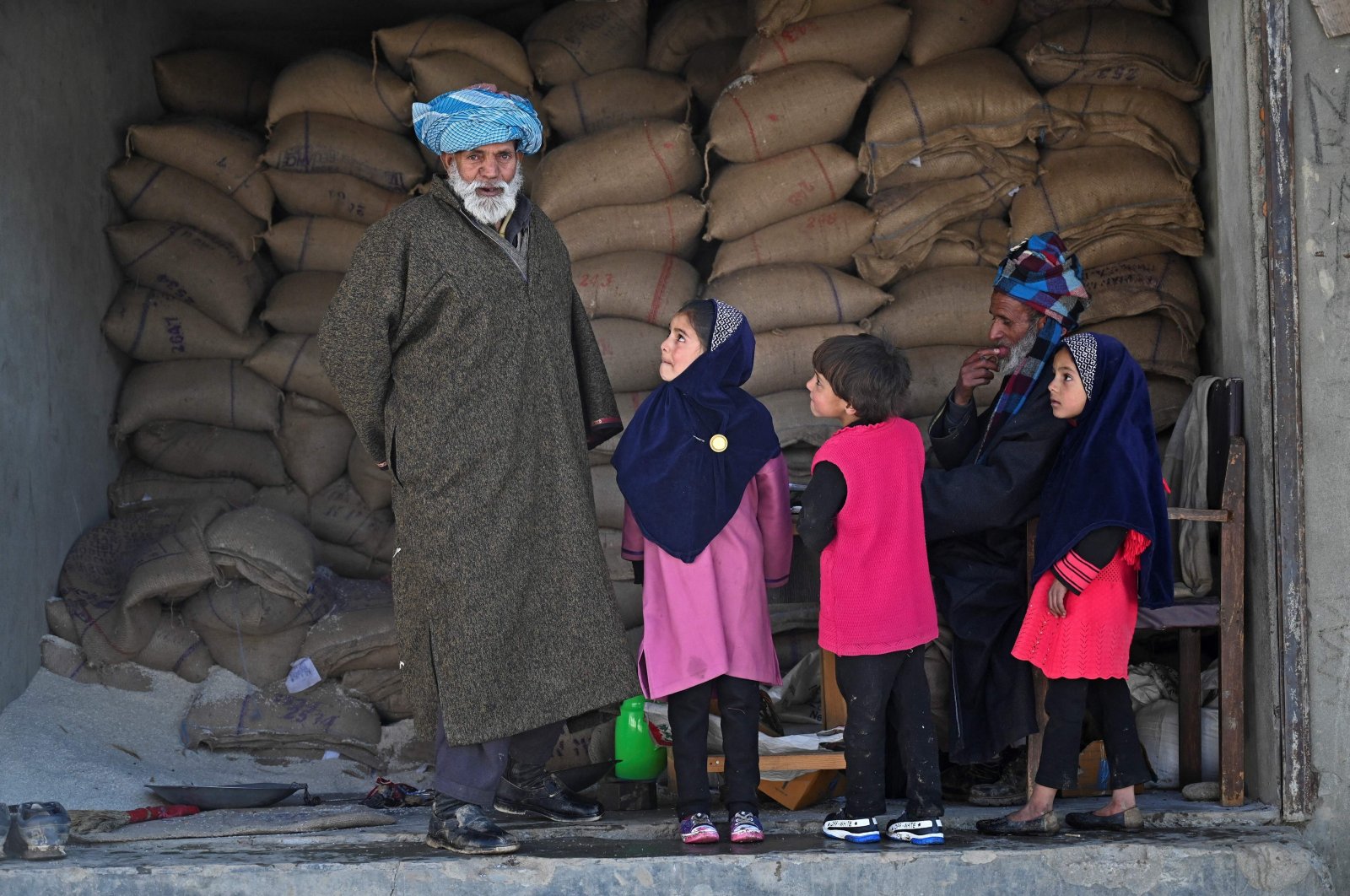 People are seen inside a ration shop where residents have been served notices to provide ownership proof of their houses by the government forest officials in the Nagbal area in Indian-administered Kashmir, Dec. 15, 2020. (AFP Photo)
by French Press Agency - AFP Mar 08, 2021 8:53 am
RECOMMENDED

India has been escalating their assertion of control over the fractious Himalayan region of Kashmir, as they started to evict communities living in remote woodlands who are now banished from their ancestral homes while thousands of apple trees in small forest villages have been chopped down and wooden homes knocked down by police, forest guards and other officials.

Ghulam Khatana's family lived half their lives in a simple log hut in Kashmir's forests, until around 200 men brandishing guns and iron rods chased them out of their home and into the blistering cold.

"They just ended our traditional way of life. I feel as if I was buried alive," said 30-year-old Khatana in Kashmir's famed Pahalgam tourist region. "It (the forest) protects us from disease and sustains us. But they have thrown us out," Khatana told Agence France-Presse (AFP).

The eight people in his old home, like their neighbors in the Lidroo village region, rear livestock in summer before bunkering down in their huts in winter. All of them, including 90-year-old grandmother Janat Begam, were forced to take refuge in cramped homes with other relatives.

More than 100 million people live in forests across India and are subject to laws meant to protect their right of residency if they have occupied their land for three generations. However, last November, authorities began sending out eviction notices after claiming that more than 60,000 people were illegally living in or cultivating land in Kashmir's forests.

Control of Kashmir is divided between India and Pakistan, with both claiming the territory in full, a dispute that has sparked deadly confrontations between the nuclear-armed rivals.

New Delhi has half a million troops stationed in Kashmir as it fights a decadeslong insurgency in a conflict that has killed tens of thousands of people, most of them civilians. Prime Minister Narendra Modi has sought to tighten India's grip on Kashmir and in 2019 scrapped laws guaranteeing its people limited autonomy.

The move was accompanied by the mass arrest of political leaders and dissidents, as well as a monthslong phone and internet blackout.

It also paved the way for Indians outside Kashmir to buy land there for the first time and made the territory subject to national laws that determine who has the right to live or tend the land in its forests.

Officials in Kashmir told AFP thousands of acres of forest lands have been added to registers to coax outside businesses to set up local operations.

"The evictions and alienating these people from the forests amounts to direct dispossession," local activist Raja Muzaffar Bhat told AFP.

Others accuse Modi's Hindu-nationalist government of wanting to dilute the local population in India's only Muslim-majority territory.

Former Kashmir chief minister Mehbooba Mufti, who was detained for more than a year after the 2019 crackdown, accused New Delhi of trying to change the region's demographics through "settler colonial" land laws.

New Delhi has not commented on the tree felling and demolition of the huts, and calls to government spokespeople have gone unanswered, but a senior forest official, who asked to remain anonymous, told AFP there was "a lot of pressure from higher authorities to be unsparing" on land matters.

Other authorities said forest guards, who are tasked with guarding the woodlands against clearcutting and timber smuggling, were being trained in how to abide by the national laws meant to protect communities under their jurisdiction.

Activists say this occurred only after an outcry over the evictions. The evictions heightened tensions in a region already bristling with anger at Indian rule.

In remote Kanidajan in central Kashmir, 45-year-old Biya Bano said forest guards warned her husband and eight children that they would "burn you alive" inside their log home if they did not immediately vacate it.

Officials had trekked up Kanidajan's hills to hack down 11,000 fruit trees cultivated by dozens of poor families.

Abdul Ghani, who lives on the edge of the Kanidajan forest, said his orchard of 300 apple trees was chopped down without warning. "They came on the sly, otherwise we would have laid down our lives but not let them destroy the trees," the 70-year-old told AFP.

"We've been here even before India's independence (in 1947)," added Ghani's son Shakeel Ahmed. "There's no other resource here."