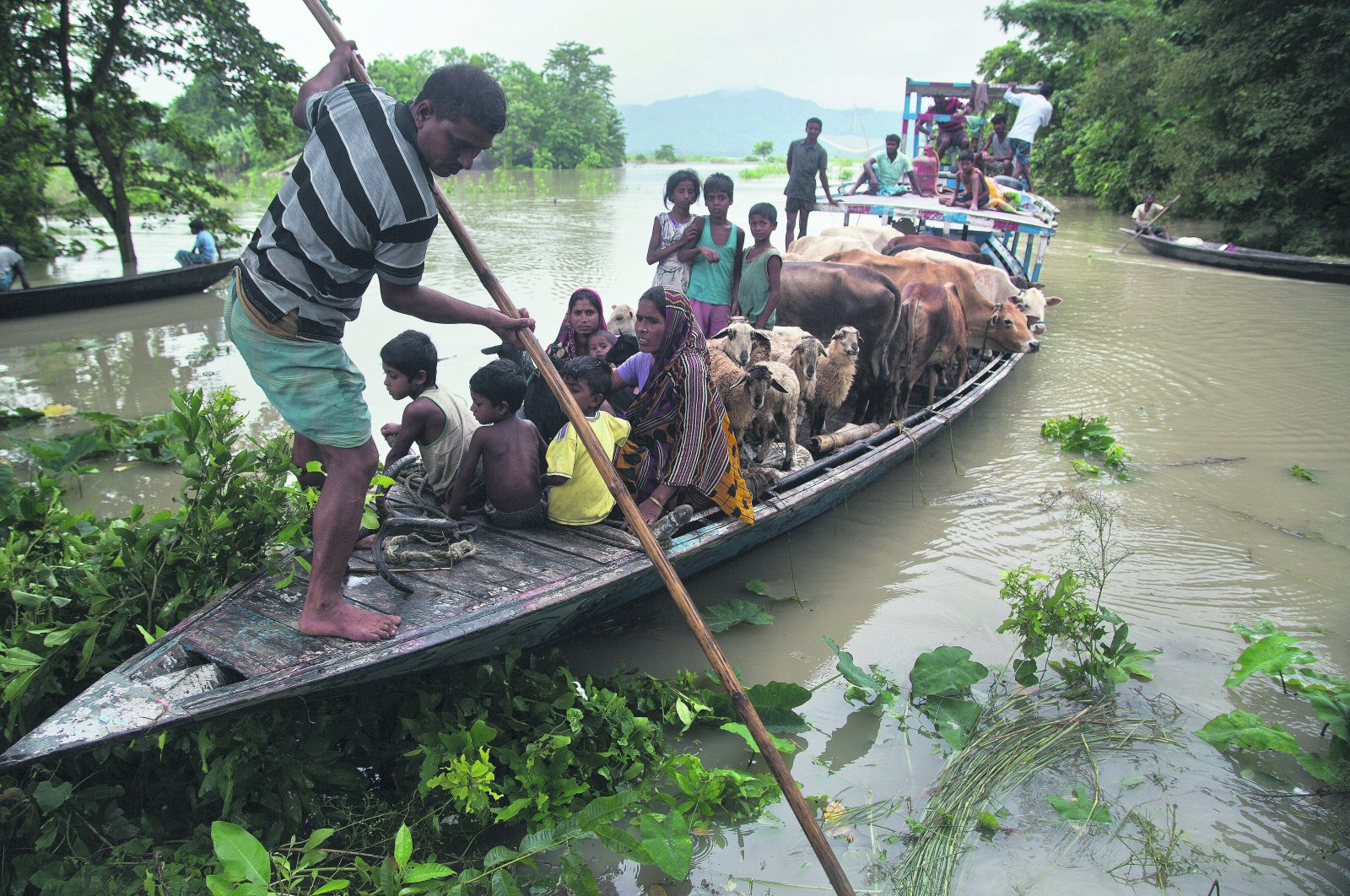 A boat carries flood-affected villagers and cattle to a highland in the Katahguri village along the river Brahmaputra, east of Gauhati, India, July 14, 2019. (AP Photo)
by REUTERS Dec 02, 2020 10:28 am
RECOMMENDED

India is considering a plan to build a 10 gigawatts (GW) hydropower project in a remote eastern state, an Indian official said Tuesday, following reports that China could construct dams on a section of the Brahmaputra river.

The river, also known as the Yarlung Tsangbo in China, flows from Tibet into India's Arunachal Pradesh state and down through Assam to Bangladesh. Indian authorities are concerned Chinese projects could trigger flash floods or create water scarcity.

"The need of the hour is to have a big dam in Arunachal Pradesh to mitigate the adverse impact of the Chinese dam projects," T.S. Mehra, a senior official in India's federal water ministry, told Reuters.

"Our proposal is under consideration at the highest level in the government," Mehra said, adding the Indian plan would create a large water storage capacity to offset the impact of Chinese dams on flows.

Diplomatic relations between India and China are at a nadir, with troops locked in a border face-off in the western Himalayas for months.

Some analysts warned that damming the Brahmaputra could potentially develop into another flashpoint, as Beijing's dam-building activities moved closer to the Indian border.

"India is facing China's terrestrial aggression in the Himalayas, maritime encroachments on its backyard and, as the latest news is a reminder, even water wars," Brahma Chellaney, a specialist on India-China ties, said in a tweet.

On Monday, Chinese state media reported the country could build up to 60 GW of hydropower capacity on a section of the Brahmaputra, citing a senior executive.

Yan Zhiyong, chairperson of state-owned Power Construction Corporation of China, speaking at an industry conference, said plans to dam the river were a "historic opportunity."

"Formally, we are telling them (the Chinese) that any project you undertake should not cause an adverse impact on India. They have given an assurance, but we don't know how long their assurance will last," Mehra said.

Hydro projects on Asia's great rivers have been a growing source of regional tensions in recent years. In Southeast Asia, China has faced accusations a series of dams it has built on the Mekong have worsened drought in downstream countries, which Beijing denies.

India would be concerned if the Chinese built a dam around a so-called "great bend," where the Yarlung curves southward before entering India and where the river gains a substantial volume of water, said Sayanangshu Modak, a researcher at the New-Delhi based Observer Research Foundation think tank.

In Bangladesh, Sheikh Rokon, the secretary general of environment campaigners Riverine People, said a multilateral discussion should be held before China builds any dams.

"China's downstream neighbors have a legitimate cause for concern. Water flow will be disrupted," he said.